Diving Marquesas Atoll is a unique experience in many ways.

First of all it's a chain of islands spanning about 3.5 miles in width.

It's comprised mainly of 10 hardwood hammock islands fringed with mangroves.

Within the center of the Marquesas Keys is the lagoon, which is popular with anyone snorkeling in the Keys, fishermen and bird watchers.

It's also the only know atoll in North America, so if you've never been on a diving trip here, add another "first" to your list.

Plus it's a Florida Keys National Marine Sanctuary Wildlife Management Area which is one of the reasons the Marquesas Keys are so pristine.

The other reason is that it's basically a world by itself. With it's greater distance from Key West, most people aren't willing to make the journey out to go diving Marquesas Atoll.

For those of you who are, you'll be rewarded with remarkable beauty and relative solitude. 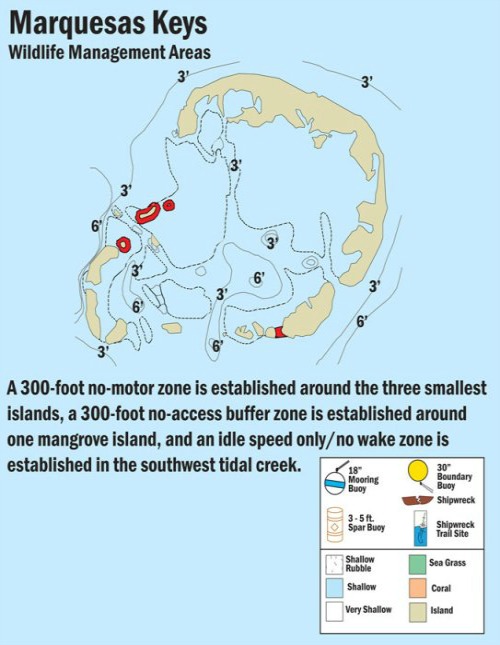 
Not only is the Marquesas Atoll popular with anyone who's been scuba diving Key West or snorkeling, it's a favorite Florida Keys fishing spot and avid bird watching area. Knowing that fishermen may be in the area however, means you must exercise caution and always use your divers down flag when diving Marquesas Atoll.

Over the centuries, numerous vessels have also wrecked in the vicinity. Two of the most famous wrecks are the Atocha and the Santa Margarita, discovered by Mel Fisher in 1985.

The vast wealth that was found at these two sites is now on display in Key West FL at the Mel Fisher Maritime Museum.

Since you're already in the Marquesas Key West area, if you're a strong intermediate or advanced diver, another dive site you'll want to explore is Marquesas Rock.

The Marquesas Rock is a much deeper site at 120 feet, and is known for it's tough currents. The Rock is located about 1.5 miles west of Cosgrove Shoal Light which is a 49' tall marker in the Marquesas Keys area.

For those who do decide to go to the Rock, you'll be treated to a different spectrum of Florida marine life. At these greater depths you'll find more species of shark such as tiger, hammerhead, mako, bull, spinner and lemon.

You'll also encounter on occasion a whale, dolphin most certainly, and some of the larger ocean traveling pelagics such as mahi mahi and cobia.

Also, throughout March and September, tarpon can be seen, sometimes in heavy numbers as they migrate through the Marquesas Islands Key West area.


Diving Marquesas Atoll offers so much more in terms of habitat, nature, and marine life than what is usually experienced on a diving trip. The area is an important nesting and breeding area for many birds, especially wading birds such as ibis, heron and roseate spoonbill.

The journey may be great, but you'll find it was worth every second.