There are 5 different types of sea turtles that nest in the Florida Keys.

For all species, the male turtles spend their entire, long life span living in the ocean.

Only the female turtles visit land, and they only do this to lay their eggs in nests before returning back to sea.

All of the turtles that come to the Florida Keys to nest are in various degrees of being endangered.

This is why, especially during nesting seasong, it's so important for residents and those on a Florida Keys vacation to watch for nests.

Any nests that are found should not be disturbed, and any unmarked nests should be reported.

It's also important that everyone be aware of the following proactive measures so both the nests and the hatchlings have a chance to survive.

Along the Atlantic seaboard, from March to October, female turtles come to shore at night to dig their nests and lay their eggs. Female turtles typically return to the same nesting area they hatched from, perpetuating the sea turtle life cycle. 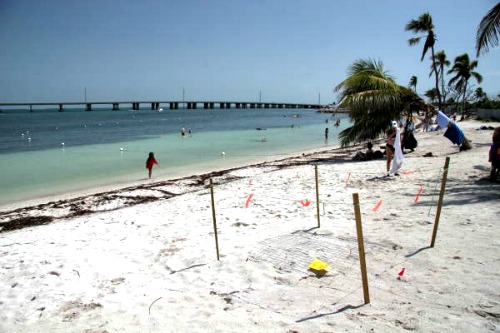 
Turtle nests are not unusual to find when walking on Florida beaches or combing for shells. Many turtle nests will have been marked by nest surveyors in an effort to protect the tiny inhabitants incubating inside.

Sea turtle nesting season receives a lot of attention, and vacationers and residents alike are reminded to be watchful when on Florida beaches so as not to disturb the nests.

If you spot a sea turtle nest that has not been marked, please contact the Fish and Wildlife Conservation Commission at 1-888-404-FWCC as a critical first step measure to protect these endangered species. To report an injured, ill, or dead turtle, you can call the same number or the Marine Patrol at 1-800-DIAL FMP. 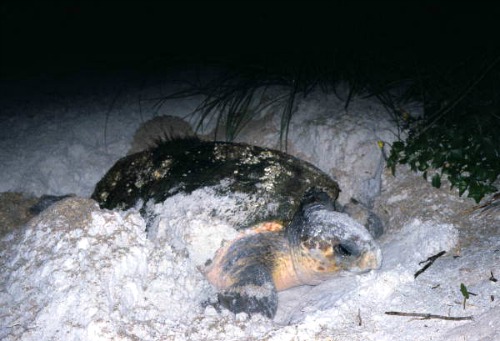 
In about 45 days to 2 months, the eggs in the nest are ready to hatch. The tiny sea turtle hatchlings break out of their shells, and thrash and bang about in their sand nest, forcing their way to the surface. Once the sand has cooled, they emerge at night and guided by moonlight crawl their way to the sea.

Unfortunately, in the course of the nesting season, many hatchlings are found after becoming entangled in seaweed or other debris.

These tiny creatures can also become disoriented by house lights, car lights or flashlights. Instead of heading to the life sustaining sea, the lights misguide them from their true path.

You'll hear stories of tiny turtles found dead in drain holes, trapped in lawn chairs, or caught in a hole on the beach a child dug earlier that day.

In life, the little things are often taken for granted. However, when you're a pint sized, just hatched turtle, with only a speck of energy, any obstacle, no matter how small, can be a fatal one. 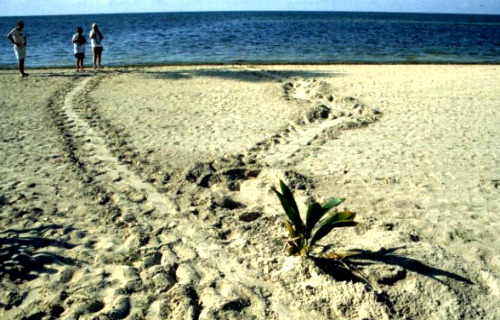 
It's critical that anyone on the beach during turtle nesting season do several things. First, fill in any holes that have been dug so tiny hatchlings don't fall in and get trapped.

Also, sand castles and other higher obstructions need to be leveled so the hatchlings can make their way past these tall obstacles and get to sea. Litter, especially plastic objects, need to be picked up to prevent turtles from ingesting and dying from these foreign materials.

One of the most critical things that is often overlooked is controlling lighting at night. Lights distract and disorientate turtles. They are drawn to the source instead of heading towards the water where they must go to survive.

Small hatchlings are especially at risk as their tiny bodies can dehydrate quickly. Any extra physical effort or further distance to travel can prove fatal. Since only about 1 hatchling in 1,000 survives to sexual maturity, it's important that they be given every fighting chance possible.

If you have a home on a beach or are vacationing near the beach, removing beach chairs and other items before evening can be a life saver. Turning off dock lights and outside house lights help by not distracting and disorientating the nesting turtles and hatchlings from their important tasks at hand.

Interior house lights should also be shielded by drapes and if possible, use red LED lights inside as they're not only cost effective, they're less likely to attract turtles. Also, if you're walking on the beach at night, if you avoid using flashlights or cameras with flashes you'll save even more turtles.

The video clearly shows the challenge these young turtles have in struggling to get out of the nest, and the arduous trip they have to safely reach the sea.

This is why it's critical for people follow the above recommendations to help keep hatchlings safe.


The 5 Sea Turtle Species
Found in the Florida Keys

Found throughout the world, there are 7 species in total. 6 of the 7 live in North America and 5 of the 7 nest in the Florida Keys. The largest concentration of the 5 turtle species in the Keys are found in the protected Dry Tortugas National Park.

Out of the 5 species in the area, this is the only herbivore. This species is fairly established elsewhere in the world, but in the Florida Keys it has endangered status because it was once heavily harvested for it's meat. The shell on this turtle averages between 36 - 43 inches and they weigh from 300 - 350 pounds. 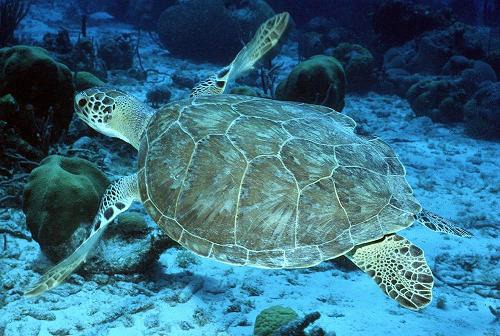 Another species is the hawksbill sea turtle, which is aptly named for it's hawk like beak. The shell on this species is responsible for the name "tortoise shell" as the pretty overlapping scales are multi-colored. This species averages between 30 - 36 inches in length and between 100 - 200 pounds. 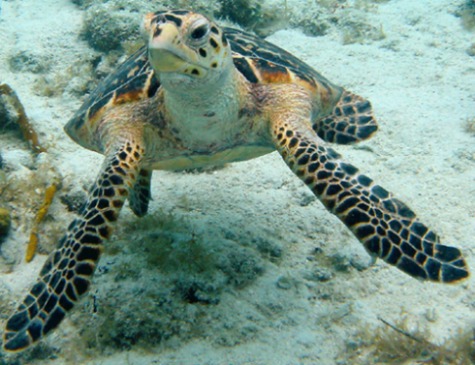 The endangered Kemp's Ridley sea turtle is the smallest, averaging between 80 - 100 pounds with it's shell measuring no greater than 30 inches in length. The young have a dark black shell that is oval in shape and as the turtle matures the color changes to an olive gray. 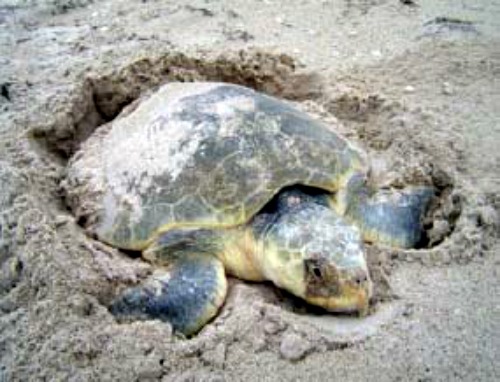 The leatherback sea turtle is the largest and has a large migratory range where it can be found from Canada to the tropics. Considered endangered, this massive turtle can weigh close to 2,000 pounds and reach or exceed 6 feet in length. The shell on the leatherback lacks scales and is covered instead by thick ridged skin, hence it's name. 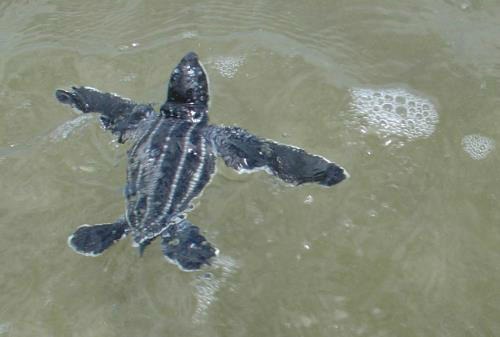 This Leatherback Hatchling Will Be a Giant When Fully Grown
www.nmfs.noaaa.gov, S.R. Livingstone U of Glasgow

The loggerhead sea turtle is the species most commonly found along the Atlantic sea board, and it's very prominent in the Dry Tortugas. Their name is derived from the fact that they have large heads and strong jaws capable of crushing the seashells to get at the meat they dine on. This larger turtle is a threatened species and averages between 33 and 40 inches in length and weighs in at 150 - 400 pounds. 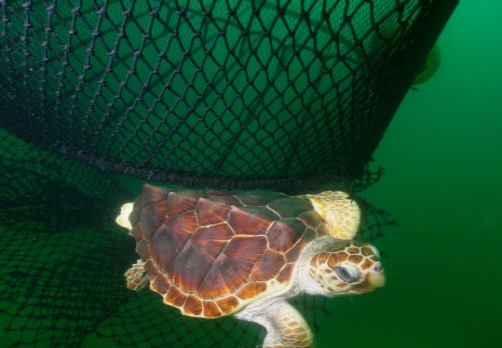 
As an Amazon Associate I earn from qualifying purchases such as these items.

Many factors have come together to give these creatures endangered or threatened species status. Over harvesting for their meat, along with pollution have been factors.

Debris and trash left by humans, such as plastic bottles, fishing nets, fishing lines and hooks plus lobster traps are all major causes of injury, illness and turtle death.

However, a viral condition which causes debilitating tumors is responsible for a high percentage of death. Over 50% of these turtles are afflicted by the fibropapilloma virus.

There are different conservancy organizations and private individuals that work to help protect and save these rare and special creatures. One worthwhile charity is the Save-a-Turtle organization. Through voluntourism and a group of local community volunteers, they help with nest surveys and create greater public awareness of the threats facing these endangered species.

These special creatures have lived in the earth's oceans for a million years or more. Negative interaction with humans and our by-products have been a major contributing factor in their decline. Now it's up to us to intervene in a positive manner so that they may live for another million years or more.