The seven islands that comprise the Dry Tortugas are 68 nautical miles west of Key West and are the last of the Florida Keys.

The Tortugas Islands were first discovered in 1513 by Ponce de Leon, and were given this named because of the dense sea turtle population, and the lack of fresh water.

As the name implies, a variety of sea turtles, including four endangered sea turtles nest in the Tortugas National Park each year.

The islands and the surrounding Gulf of Mexico, make up the roughly 100 square miles of the National Park, most of which is water.

Located between the United States and South America, these last islands of the Florida Keys make the the perfect stopping off point for migratory birds.

Their proximity to Key West FL also makes the islands a popular destination for tourists, campers, and even those planning a casual Dry Tortugas wedding. 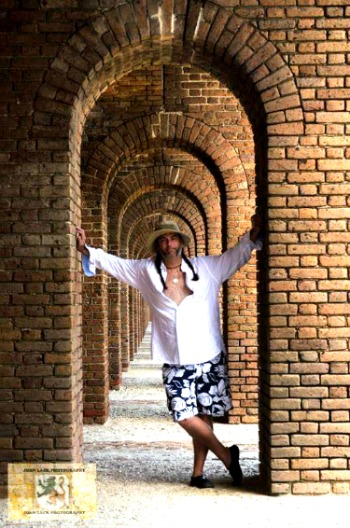 
Last Islands In Florida Keys
Were A Pirate Haven

These Keys have also been home to more than just Florida sea turtles and birds. Pirates frequented the area since the rocky shores and shallow waters allowed them to remain undetected.

They also created the perfect pirate hunting grounds, giving the swashbuckling buccaneers easy access to the numerous ships plying the nearby waters.

This feature, along with the fact that vast numbers of ships traveled these waters, explains why there are so many Spanish Galleons and other treasure ships now lying in watery graves.

This combination of traffic and danger created easy picking for pirates and salvagers and is why these last islands in the Florida Keys were popular as a base of operation.

These last islands in the Florida Keys are also home to Fort Jefferson on Garden Key. Fort Jefferson was intended to protect the Gulf ports from any threat or invasion.

In the days after the 1812 war, America's gravest concern was invasion by the British who were building a colony in nearby Bermuda.

There was also concern about Mexico's war with Texas and the diminishing power of Spain, and it's desire to rectify that position.

If America could keep enemy fleets from anchoring at the Tortuga islands, they would have no haven or proximity to attack. Towards that end, Fort Jefferson was designed to be the Gibraltar of the Gulf.

However Fort Jefferson's fate ended up paralleling that of East Martello Tower #2 in three ways. Constructed to withstand any onslaught, it was built with 8 foot thick fortified walls. But after 30 years of construction, the project was never completed.

Another similarity to the fated Key West Martello Tower is that Fort Jefferson never saw military action. Not one of the 450 guns were fired or tested. 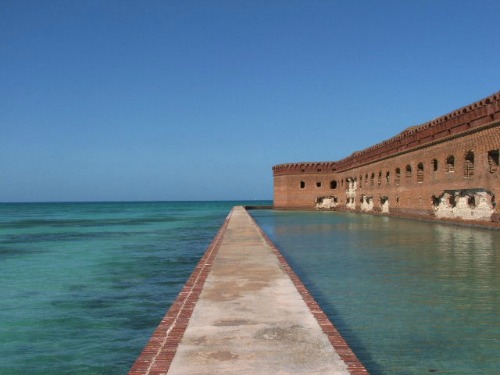 
During the Civil War, Fort Jefferson served as a post for Federal troops but as with East Martello Tower #2, advances in artillery made the Fort susceptible to damage, rendering it obsolete by 1866.

As early as 1861, Fort Jefferson began to house deserters during the Civil War. It also became home to the 4 infamous men accused of conspiring to assassinate President Lincoln.

In 1874, the Dry Tortugas Fort Jefferson was abandoned. A Florida hurricane had hit the Keys, and the subsequent mosquito infestation resulted in a terrible yellow fever outbreak.

During the early 1900's Fort Jefferson was briefly occupied, then once again during World War I. However, it wasn't until 1935 when President Franklin Roosevelt declared it a national monument that Fort Jefferson Dry Tortugas met it's final purpose.

Traveling to this country's last 19th century coastal Fort is a true highlight of a Key West vacation.

How To Get To Dry Tortugas National Park

Out of all the Parks in the United States, this National Park is the most inaccessible. You cannot drive to Garden Key or Fort Jefferson. Florida Keys travel to these remote islands is only by private boat, Dry Tortugas fishing charters, the Key West Fort Jefferson ferry or the Dry Tortugas seaplane. 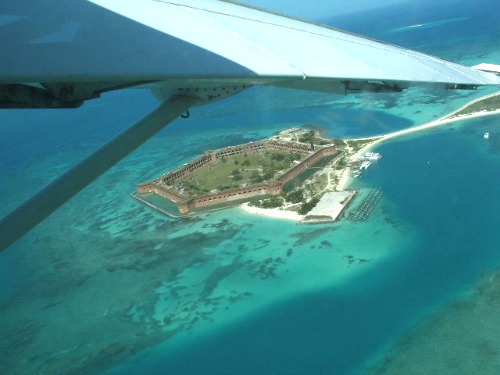 
Going by Key West seaplanes to Dry Tortugas is slightly double the cost of going by National Park ferry. The benefit is that it's only takes about 40 minute each way by seaplane, versus the 2 hour trip each way by ferry.

Traveling by seaplane you'll have more time to spend at the National Park. Conversely, going by ferry to Fort Jefferson, you'll enjoy a leisurely trip and get to see dolphin and other marine life along the way.

If you choose to go by high speed ferry, The Dry Tortugas National Park Ferry departs at 8:00 a.m. from the Key West Seaport and Harbor Walk at 240 Margaret St. They also board half an hour before leaving so you will want to make sure you arrive by 7:30 am.

The ferry is the Yankee Freedom II, a catamaran with air-conditioned cabins, that provides year round excursions. All included in the ferry fee is a continental breakfast, a buffet lunch on the grounds of the National Park, snorkeling gear, complimentary beverages throughout the day, freshwater rinse off, and a guided tour of Fort Jefferson and the National Park. This is a full day trip as you spend 4.5 hours at the Park and 2 hours traveling each way.

Once you arrive at the National Park you have several options. Fort Jefferson tours take about 45 minutes, then you can stroll the Florida beaches. You can also go swimming and snorkeling in the beautiful waters off Garden Key and within the National Park boundaries where there are reefs and wrecks to explore.

Florida Keys snorkeling is an absolute must on a Dry Tortugas trip. If you're a beginner or traveling with children as snorkeling along the Moat Wall is a fun way to explore the crystal clear water viewing tropical fish, colorful coral, and juvenile game fish. 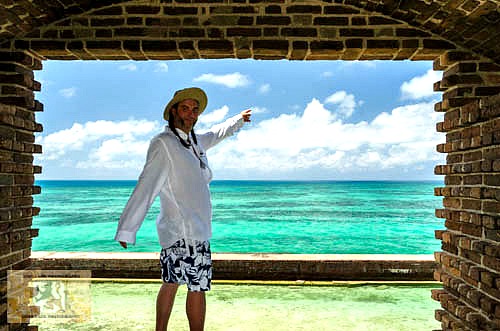 
The water surrounding these last islands in the Florida Keys is incredibly shallow and filled with an abundance of tropical fish, and other marine life. You'll want to make sure you go snorkeling, and remember, the equipment is included in your ferry fee.

With your Yankee Freedom ferry ticket you receive breakfast and lunch, and a 45 minute guided Fort Jefferson tour. You also have the option of traveling in the climate controlled cabin with TV and VCR, or traveling outside on the deck, watching for sea turtles and dolphin.

Occasionally visitors to the Park prefer to stay the night. You can plan on camping Dry Tortugas for a nominal extra fee. 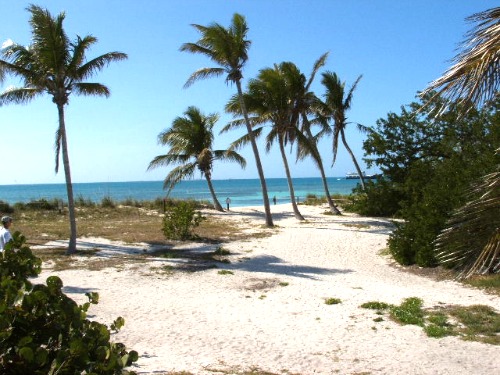 
However, just as it was when Ponce de Leon discovered these islands, there's still no fresh water available. This means you must be self-contained as there is no food, water, public telephones, or supplies available.

Whether you go by seaplane or ferry, advanced reservations for Fort Jefferson camping are required. You can call either 305-294-7009 or 800-634-0939 to make arrangements for your stay.

If you're traveling by the Yankee Freedom, those planning on Dry Tortugas camping will have to check in by 6:30 at the Key West Seaport. This is half an hour earlier than the other non-camping travelers are required to arrive.