Swimming with dolphins - what a wonderful idea and what childhood and adult dreams are made of.

To be able to romp and play with the "King of the Sea" is a universally appealing idea.

Of course dolphins are still wild animals, and as sweet in nature as they appear, caution should be exercised when near them.

This marine mammal is an amazing species, known for their intellect, playfulness and often strong affinity towards man.

In 2011, a Florida woman's doberman pinscher fell into a canal, and was unable to get out. Turbo, the doberman inadvertently went swimming with dolphins when two of them came to his rescue. They stayed with him all night, helping to keep him afloat. Since Turbo was too weak to bark, the dolphins continued to make noise until rescuers were alerted to the situation.

It's because of situations like this, that humans have developed a true affinity for these amazing, smart, and beautiful mammals.

We acknowledge their intellect, and we can't help but smile when we see them jump in the water, or when they frolic in the wake of a boat.

For so many of us, dolphins symbolize beauty, freedom, and even love and towards that end, we can't help but immortalize them in art or the jewelry we wear.

In the wild, the average lifespan of a Florida Keys dolphin is about 30 years. There are exceptions though. The bottlenose dolphin can live approximately 40 years, while the orca, largest of the species, can live up to 80 years.

Known for their intelligence and playful attitude, it's interesting to learn that dolphins possess a brain comparable in size to a humans. Also, like the human brain, they have a complex number of folds, and it's these folds that are associated with higher intellect.

The dolphin's ability to perform a variety of tasks, and their intricate communication system reflect their adaptability and level of intelligence.

They also have an unusual built in "navigational system." Like whales, a dolphin is able to maneuver the darker recesses of the water through a process called echolocation.

The clicking sounds they emit from their blow hole bounces off objects, and the bouncing echo is then relayed back, so they can track prey, determine objects and the distances to them.

Often when we think of these creatures, we picture them jumping and playing around people and boats. It would be a very rare exception for anyone to be out on the ocean, and not see these happy mammals splashing and playing in the boat's wake. 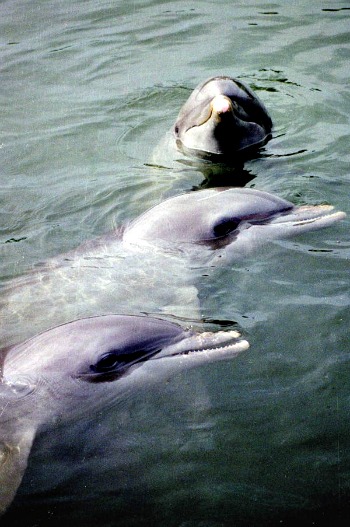 
Dolphins may swim along for the fun of it, but it could also be because the boat's wake allows them to reach higher speeds. Their leaps and jumps also allow them to cover greater distances and being out of the water reduces the friction caused when swimming.

Their leaping out of the water also serves other purposes. The play value certainly ranks as a top reason, but this also gives them a chance to see their surroundings and each other. It can help dislodge pests, and they can hunt for fish by spotting birds who will gather above the water where bait fish have been forced to the surface by larger, predator fish.

These endangered marine mammals predominantly eat squid, small fish, and crustaceans. Where they live and the food source they chase is a major determining factor in the overall speed of each dolphin species.

Dolphins who are ocean dwelling chase faster moving fish, so they're quicker than their coastal living relatives. Dolphins living in open water typically swim at speeds of 15 mph or more, while dolphins living close to shore swim at 10 mph.

In the dolphin world, the different species typically don't mix. However, when there's no conflict over the same food source, you can find different dolphin species cohabitating together.

The dolphin pod size will also dictate how they fish and where they live. 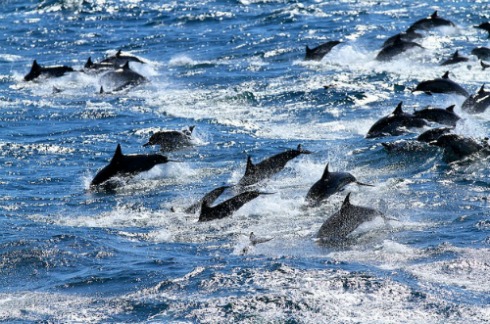 
All dolphins live in close knit families. However, depending on the species of dolphin, the family size can range from several as in the case of the river dolphin, to larger pods of 30 or more for other dolphin species.

Dolphin "families" can even reach upwards of several hundred members, and when they reach this size they are referred to as herds or schools.

Being mammals, the babies are born live, tail first. They will nurse upwards of 2 years and live with their mother for up to 8 years. New babies are born approximately every 2 years.

People often believe porpoise are dolphin, but they're actually two different families. There are approximately 40 different dolphin species, and they can range from 4 feet to 27 feet or more in length. They have conical shaped teeth, and their most noticeable feature is their long distinct nose or beak.

Porpoises are a smaller family of about 6 species and are smaller in size, averaging only 5 - 7 feet in length. They have shovel shaped teeth and unlike their counterparts obvious beak, their heads gently and uniformly slope to the nose with no pronounced break.

River dolphin will live in small groups because they feed off the bottom of the river. In contrast, larger families form because it's more productive for them to fish in sizable groups. Using echolocation when hunting, they'll typically fan out to cover a wider swath of the ocean, increasing their productivity for finding food. 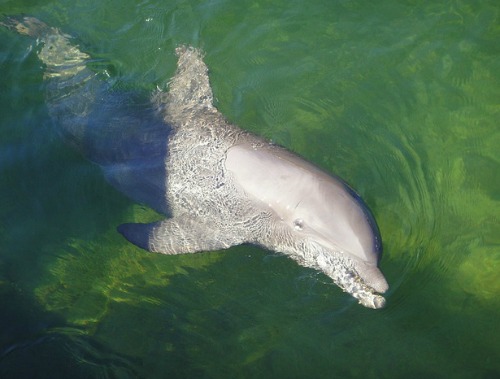 
Out of all the dolphin species, the bottlenose or "Flipper" is perhaps the most common, most recognized and most beloved.

Swimming with dolphins is a very popular activity at many of the oceanariums around the world and it's the bottlenose that is the species that people most often interact with.

Orca, or the killer whale is the other most recognizable of the species, and this dolphin is commonly seen performing at various venues such as Sea World.

To this day, various countries still harvest dolphin. Some nations do so because they consider them to be rivals to their nation's fishing industry. Others hunt them as a preferred food source. Some are killed as a by-product of catching saltwater fish, while others are taken and used for oil or fertilizer.

For many years dolphins were caught and killed in large numbers during the process of commercially harvesting tuna. The United States has since passed laws to prevent the use of these fishing techniques.

The USA also been instrumental in working to help ban fishing or injury to this endangered species in other countries. However some nations still hold firm in their practice of hunting or killing dolphins.

Public awareness has helped to reduce the incidents, but certain dolphin species have been substantially reduced in regions of the world.

Unfortunately these wonderful creatures also fall victim to unintentional by-products of man. Pollution, improperly disposed of garbage and fishing gear, all have played a role in their injury or death.

In the Florida Keys there are different voluntourism programs you can participate in that focus on a variety of beneficial ventures designed to protect marine life and to rebuild and conserve nature.

Some of these conservation programs are dedicated to saving, and rehabilitating injured dolphins in the Florida Keys.


When swimming with dolphins it's important to be respectful of these creatures and the dolphin habitat. They're friendly but they're wild, and under certain conditions could be dangerous.

Dolphin encounter eco tours and organized dolphin encounters like at Theater of the Sea in Islamorada, are one way you can enjoy and learn more about these special mammals.

However you interact with them, it's important to remember the valuable role they've played in our lives. Whether it's to make us smile, or whether it's when they've helped save a life. Now it's time for us to step up, be responsible, and repay that debt to Flipper.