Spending at least one day Dry Tortugas diving or snorkeling is one of the must 'Florida Keys things to do' on your vacation to the Florida Keys.

Discovered by Ponce de Leon in 1513, through the centuries these 7 smaller islands have served multiple purposes.

They've been a pirate hideaway, a military outpost with the construction of Fort Jefferson, a prison, and a navigational marker for ships heading to the west cost of Florida and the Gulf States.

Effectively positioned as a major shipping channel, the 75 mile wide passageway allows vessels a smooth transition from the Atlantic to the Gulf of Mexico.

Unfortunately over the centuries, the heavy traffic, combined with the shallower water, stronger currents, numerous Florida hurricanes and dangerous coral reefs, took their toll on the number and type of vessels lost at sea.

Not only is the region littered with shipwrecks, it's the variety of sunken cargo that makes this area worthy of scuba diving trips. Spanish wealth, military weaponry, food supplies, tobacco, lumber, and other merchandise have been lost. Even vessels that once carried Cuban refugees litter the ocean floor, as does WWII Germany's once prized submarine, the U-2513. 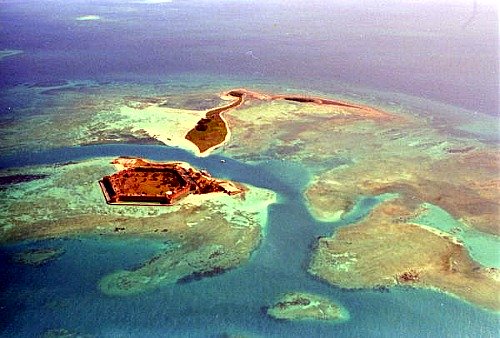 
Due to the distance from Key West FL, Dry Tortugas diving is typically reserved for more serious divers who are planning on spending several days scuba diving Florida Keys.

Many of the shipwrecks in this area also require technical scuba diving certification as they lie in the deeper recesses of the ocean.

However, within the 100 square mile boundary of the Dry Tortugas National Park the water is shallower. Diving and snorkeling Dry Tortugas coral reefs and the Avanti, a Norwegian wreck, also called the Windjammer are popular with vacationers.


In fact, within the boundaries of the Dry Tortugas National Park there are over 275 incidents of ships that suffered from maritime accidents including wrecking and grounding.

If you're planning on spending time on top of the water, in a dinghy, kayak, or boat, you'll also have to get a free permit from the Visitor Center or Park Headquarters on Garden Key.

Vessels may also only anchor overnight within one nautical mile of the Garden Key Harbor Light on sandy bottom. 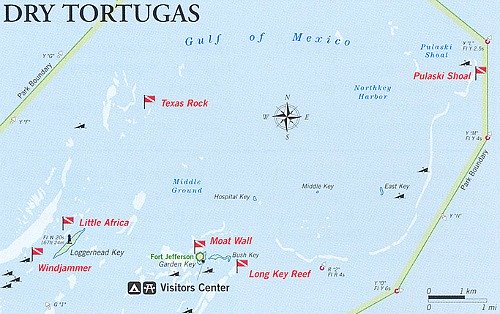 
Not all parts of the Dry Tortugas National Park are open to public activities either.

Garden Key where Fort Jefferson is located is popular for snorkeling Dry Tortugas and this is open all year, 24 hours a day. Fort Jefferson itself is open 365 days a year, from dawn to dusk.

A near by island, Loggerhead Key is open dawn to dusk, 365 days a year, but all facilities including the old lighthouse are closed to public access.

Bush Key has limited access, only allowing visitors from October 15 - January 15, from dawn to dusk. When the island is closed the public must remain 100 feet from shore.

Middle and East Keys have extended access, and are open to the public from October 16 to March 31, dawn to dusk. Like Bush Key, when these 2 islands are closed, the public must remain 100 feet from shore.

The last two Keys, Hospital Key and Long Key are closed all year and anyone visiting this part of the National Park must remain 100 feet from shore.

You'll find that no Dry Tortugas diving trip can ever be the same. Time and weather play a huge factor in what you can see and how much Florida Keys diving you'll be able to do.

The strong currents have repositioned many vessels, and the even stronger hurricanes have severely broken once pristine wrecks such as the Araby Maid and the Rhein Wreck.

However, the exciting part of Dry Tortugas diving is the thrill of the unknown. What vessel you may discover, and what precious cargo does it hold.

One of the first recorded wrecks in the region was the 117 ton Buen Jesus y Nuestra Senora del Rosario. Traveling with the 1622 treasure fleet back to Spain, this ship sank with the other vessels in the Flota after a particularly severe Florida hurricane swept through the region.

The carnage covered a large swath of the Florida coast, the Dry Tortugas and further west at the Marquesas Keys where her treasure laden sister ships, the Santa Margarita and the Nuestra Senora de Atocha sank.

A more current shipwreck is the Araby Maid which sank in 1868. Wreck diving Florida Keys at this site requires technical scuba diving certification. The conditions found when diving into the wreck were once considered pristine. Unfortunately the vessel was severely damaged in 2005 when Hurricane Katrina and Hurricane Wilma swept through the region.

The following is a list of detailed Dry Tortugas scuba diving sites arranged alphabetically and includes their GPS coordinates. Each highlighted name will take you to the informational page on that particular dive Dry Tortugas site. 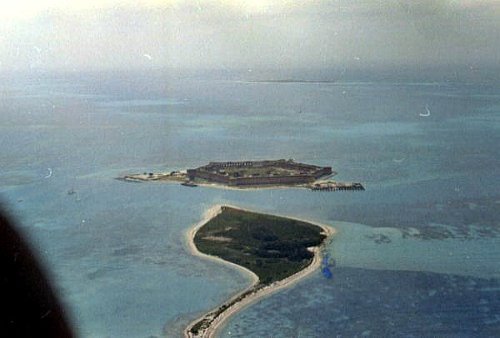 The following wrecks are near the islands and are in shallower water. This makes it possible for anyone interested in snorkeling Dry Tortugas or for divers with various levels of scuba diving certification to plan a diving trip here.

These are some of the other known vessels that carried a variety of sometimes valuable cargo. They're listed below by their name, the date they were lost, and where.

If you're diving Dry Tortugas at any of these islands and come across the sometimes very partial remains of a vessel, this may help you determine which shipwrecks you're exploring on your different diving holidays.

The fact that many of these wrecks are positioned so deeply in the waters recesses, also means this is a more exclusive diving area. A region rightly reserved for that special ‘club of divers' who possess the skill, and will to experience the thrill and pressures of technical diving.