When diving Dry Tortugas, wreck diving the Windjammer wreck is almost a mandate.

In some regard, it would be like visiting Paris and not going to the Eiffel Tower or the Louvre. It's simply not heard of.

The reason, an archaeologically important and spectacular underwater extravaganza awaits.

One as moving, colorful and brilliant as any piece of valuable art hanging in a gallery.

Located within the boundaries of the Dry Tortugas National Park, this significant wreck is found just over half a mile south of Loggerhead Key on Loggerhead Reef.


Located in shallow water, when the tide is out, parts of the Avanti wreck are exposed. This can represent a hazard to boaters, divers and snorkelers.

However, the fact that the water is clear and shallow makes it a suitable wreck diving site for all levels of scuba diving certification and anyone interested in snorkeling Dry Tortugas.

Originally named the Killean, this iron hulled, 3 masted ship-rigged vessel was built in 1875 in England. After several changes of ownership, the ship was renamed Avanti when she was purchased by a Norwegian company.

In 1907, the Avanti had been in port in Pensacola preparing to take on a load of lumber when she, and a number of other vessels were damaged by a late season Florida hurricane on October 28, 1906.

Eventually refurbished, the Avanti left port and began her journey through the Gulf of Mexico heading south to Montevideo, Uruguay.

Unfortunately more misfortune awaited her. Whether her grounding on Loggerhead Reef was due to a combination of factors that included remaining structural damage from the recent hurricane, navigational errors made by her crew, and the force of a strong winter storm, no one will know.

With circumstances working against her, the ship began to founder, and her crew worked desperately to save her and themselves.

First it appears that they dropped the port anchor to prevent the ship from washing up on the Dry Tortugas reefs. This is the anchor that's missing from the wreck site, a likely indication that the ship broke loose from it's anchor and was swept broadside onto Loggerhead Reef.

Once this happened the starboard anchor was dropped either before hitting the reef or at the time it hit. However the combination of taking on water, the hull damage from impact with the sharp coral reef, and the toll of the high seas were too much.

The ship pitched feverishly, taking on excessive water, and eventually the force of the wind and waves along with the abrasion of the coral reef, forced the ship's hull to break apart forward of the main mast. 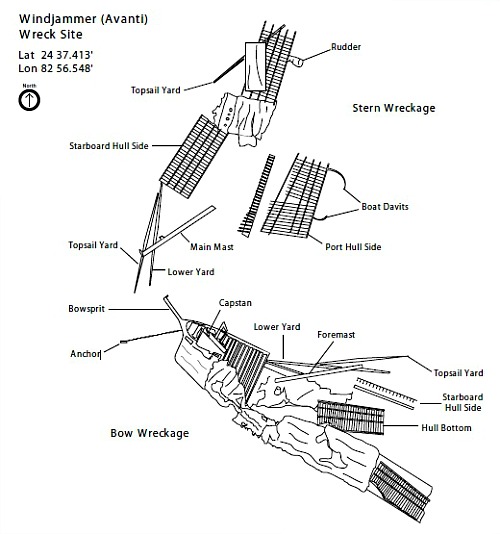 
With the hull cracking and breaking, the masts began to topple. Adding to the structural damage was the combined strength of the storm forcing the anchor to pull and contort the ship further, resulting in the stern and bow splitting and separating from each other.

All 19 men aboard the Avanti survived this Dry Tortugas shipping accident, and the majority of the cargo was later recovered. However, the ship was a total loss and she sank on January 22, 1907, 32 years from the day she was first launched.

It wasn't until 1970 that the ship's remains were discovered by an archaeological crew and it took another 20 years for the name of the ship to be determined.

The fact that this 3 masted, tall ship incorporated different materials in it's construction, makes it an important archaeological find. Built in the latter part of the sailing industry's years, the Killean had been built with an iron hull, rather than a wood hull. This meant the ship had more cargo capacity and was cheaper to build - all economic pluses for an ailing sailing industry.

Since iron is less corrosive than steel, and more durable than wood, the Windjammer is also one of the more pristine dive sites to explore when wreck diving Dry Tortugas.

The remains of this tall ship lie in 2 separate coral encrusted debris fields. The first 110' debris field primarily consists of the bow, midships and foremast section of the ship and rests in a east to west pattern. 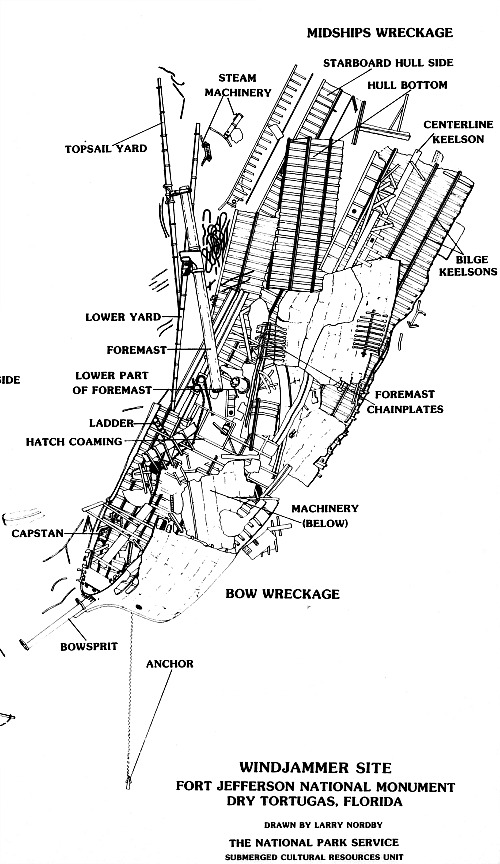 
The clean sharp lines of the bow are still visible, revealing that this vessel followed the designs of a clipper and was built for speed. During low tide, parts of the bow are exposed with portions of the port bow having collapsed.

The ship's solid iron stem is undamaged and as you move around the bow debris field you'll notice that even though the wood jib booms are gone, there are iron bolts and other pieces of metal used in it's construction that can be found.

Both bow chocks, and the top of the windlass pawl rim are visible. The ship's anchor and cable are clearly noticeable, but the port anchor is missing. Coral covers parts of the ship's remains, and some pieces are buried in the sand, hampering the ability to fully inspect some of the ship's remains. 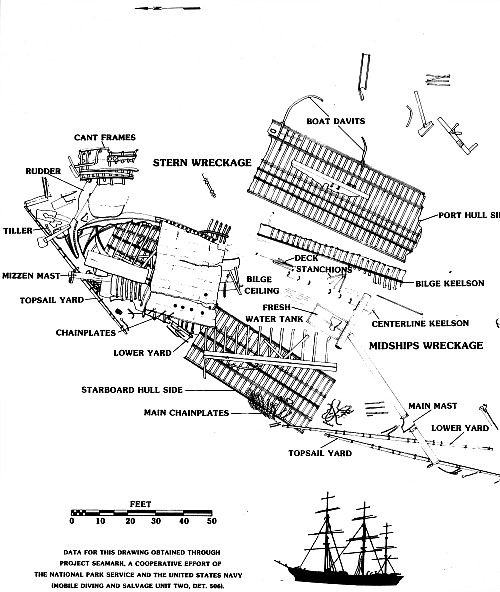 
Another debris field, equal in length runs in a north to south path and contains the midships, stern, mizzen and main mast pieces of the tall ship. Scattered throughout this area are different sections containing portholes and chainplates, plus the ship's large freshwater tank, and rudder are here.

The Avanti was rigged with wire rope which lies over parts of the masts, and the 3 lower iron masts and iron foremast are present. The lower and topsail yards are heavily encrusted but attached and rigged and the mizzenmast is broken and partially buried.

At A Glance Wreck Diving Description
And GPS Coordinates


When Dry Tortugas diving and snorkeling, wreck diving on the Windjammer will be one of the more exciting parts of your Dry Tortugas trip.

Not only is this wreck important, the coral and marine life that depend on it are too. On your visit to the Avanti, be careful not to disturb, damage or remove the things you see and find.