For sport fishermen, Florida Keys barracuda fishing rates the highest on a scale of 1 to 10.

It's hard not to like catching this Florida Keys fish.

That's because it entails everything a fisherman is looking for in terms of full throttle fishing adventure.

The fact that 'cuda give it their all, is one of the reasons they're a superb fish to target when Florida Keys fishing.

They're also easy to find. You can go Florida Keys flats fishing and catch 'cuda.

You can be reef and wreck fishing and catch them as well. In fact, around reefs and wrecks you'll typically find schools of often larger 'cuda to angle for.

There are so many different places to fish for 'cuda, that you'll find your style of fishing for them will also vary in terms of fishing tackle used.

Therefore, if you're serious about catching one of the best fighting fish you'll ever target, you should check out these Florida Keys fishing charter companies. They know the best places to fish for 'cuda and they have all the right fishing gear so your trip is as successful as possible.

Barracuda are also rather like the thoroughbred of the ocean. 'Cuda are built for speed but not for endurance.

Barracuda are fast. They can reach speeds upwards of 40 miles per hour in as little as double their body length. They hit super hard, run hard, leap and jump hard. They'll give you everything they've got, perhaps more than you ever imagined possible.

However, since barracuda are exceptionally tough fighters from the moment they grab your line, they don't have the fighting stamina of tarpon or permit. 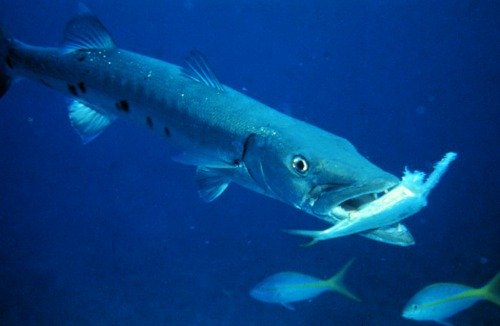 
The barracuda fish is also one of the more prized wall trophies. There's something about their sleek, slender silvery form, and toothiness that makes them particularly sought after, especially since eating barracuda fish is not advisable.

Barracuda fish have oily flesh, and if they've eaten enough prey that has consumed too much algae, their meat is also potentially poisonous to humans.

The fact that barracuda have no real food value elevates their trophy status with avid sport fisherman who are Florida Keys barracuda fishing.

This is a good size Florida fish, averaging between 5 and 6 feet in length. They also typically weigh between 15 to 40 pounds, and Greater Barracuda can weigh as much 80 pounds or more. Their larger size makes them a substantial, prized wall mount.

Florida Keys barracuda fishing is fortunately good all year. However, in the backcountry and flats, angling for this long, sleek and toothy opponent is most productive in the winter months. When the water begins to warm up, they begin to move further out and their numbers pick up in the deeper water.

Designed for speed and efficiency, a 'cuda will charge through a school of fish, slicing and dicing as it goes. It then spins around, and returns to pick up and eat the chunks and pieces of flesh.

It's this desire to attack and eat, that translates into a willingness to take most any lure, bait or fly. This means this species of Florida Keys fish a relatively easy target for anyone fishing Florida Keys, no matter their skill level.

You can make Florida Keys barracuda fishing even more exciting by opting to use light weight tackle or fly fish with gear like the ones showcased below. If you do, you'll find catching one of these crazy fish will be as exciting it can get on the water.

Unlike other fish you'll find in the flats, barracuda don't scare off by approaching boats. Instead, they'll usually lie still and if they spot you, they'll simply refuse to take your 'offering'.

The key to catching barracuda fish on the flats is to avoid being seen. This includes your boat, you, and your cast to them. How do you do this? You cast long and accurately, keeping your distance from them. If you do, you'll end up having a particularly successful day Florida Keys barracuda fishing on the flats.

This fish also loves the thrill of the chase. The key to catching one on a fly or with a lure, is to cast long. Then when you begin to retrieve, make it quick so you're imitating fleeing bait fish. This type of action is almost irresistible to a 'cuda and will usually cause the fish to race after your lure or fly.

Another reason barracuda fishing is so popular and why they're so easy to catch, is that they're found everywhere. They're in the shallow waters of the Key West flats and in the backcountry. They hang out around the coral reefs, and other structures. When you're reef fishing, if you happen to notice that yellowtail are schooling, you'll know you have 'cuda in the vicinity.

You'll also notice when Florida Keys deep sea fishing, the water can be thick with this species. That's because 'cuda also like deeper water and are often found lurking around Florida wrecks and reefs. 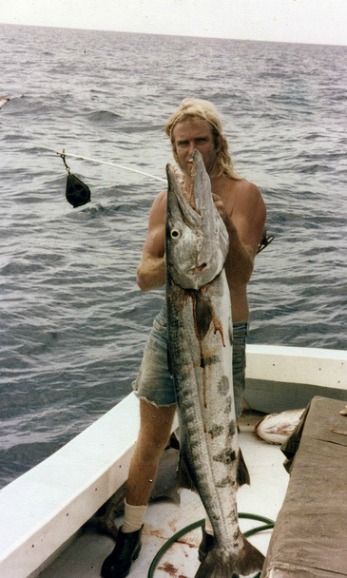 
In fact, 'cuda and nurse shark are two of the more commonly seen larger fish reported by divers when scuba diving Florida Keys.

When you get out into the deeper water or around wrecks and coral reefs, you'll often see barracuda swimming in large concentrated numbers. This means that any day you choose to go Florida Keys barracuda fishing can end up with exciting results.

The fact that this Florida Keys fish is caught in deeper water is important, especially when you combine it with the ease of catching it.

Anglers love to use this barracuda as live bait because it's often the preferred food for the larger aggressive fish such as shark or marlin. 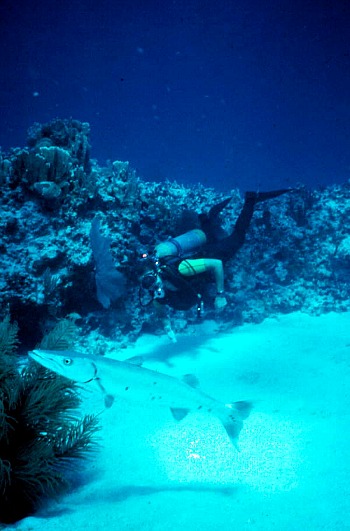 
Plus they're real fighters when hooked on a troll line, doubling the excitement for you as you attempt to target even larger fish. This makes it kind of like a good 'two-fer'. You have the thrill of Florida Keys barracuda fishing, then you get to use it as live bait to catch an even bigger fighter.

'Cuda also have very sharp teeth, so you need to protect your fingers and your line. Make sure you have heavy gloves along and use long needle nose pliers to remove the hook.

The trick is to keep the fish turned with his mouth away from you. When working to release a 'cuda be watchful for shark as this is one of their most favorite meals. You don't want to end up being attacked by a shark, while attempting to release your barracuda. 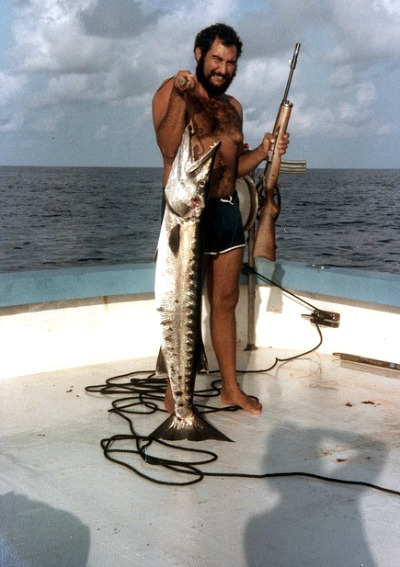 
Since they have horrendously sharp teeth, you should always use a heavy, solid wire leader. A heavy duty monofilament leader probably won't stand up to the teeth in a 'cuda's mouth.

You also don't want to gut hook the fish because then it'll have access to your line. The best thing to do is use heavy drag, and hook it hard in the mouth so you can protect both the fish and your line.

Florida Keys barracuda fishing is especially fun when you sight fish in the backcountry. However due to their shape, color and the fact that they usually lie motionless in wait of prey, you won't see them unless you bring your polarized sunglasses.

You also don't want to forget other important Florida Keys fishing tips - wear a fishing hat, lots of sunscreen, and keep it off your hands!

Also, don't forget to bring your waterproof camera in case you're practicing catch and release. You want to prove to everyone back home, that this wasn't just another 'big fish tale' when you were out fishing for barracuda.

A day spent Florida Keys barracuda fishing is as good as it gets when it comes to good, hard, fighting action. The opportunity for catching this fish is plentiful, so plan ahead, and prepare the perfect spot at home for your prized trophy wall mount.