Permit fish, like so many of the other Florida Keys fish, are around all year. However, since this species of saltwater fish doesn't like cold water, the Florida Keys fishing peak for them is February - December when the water's warmer.

Considered the bulldog of the flats, this Florida fish is small to mid-size with an average weight of 8 to 40 pounds.

This sport fishing species is found throughout the Florida Keys, but they're in greater abundance from the Middle Keys down to the Lower Keys.

Key West FL is one of the hottest fishing spots and is quite possibly the best place on earth to catch these wily opponents.

This is because this portion of the Florida Keys has more grassy flats than elsewhere. The Key West flats create the perfect place for this Florida fish to forage and live.

They're also an unusual fish in regard to attitude. Incredibly feisty, they're renowned for their bulldog type attitude. Compact in build, they have amazing endurance and you'll be surprised by how many times they'll run out your line before you're finally able to bring them in.

The ability to catch this fish varies depending on where they're located. They exhibit totally different behavior when in the flats vs out on the wrecks and reefs.

When reef and wreck fishing for permit, you'll find that they're easy to catch, almost sloppy in their attitude. This could be attributed to the fact that the water is deeper, and they feel safer. 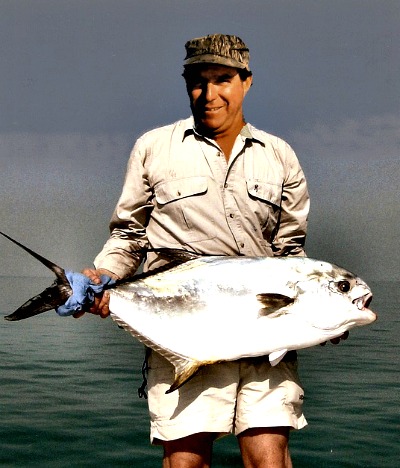 
When offshore fishing Florida Keys you can sight fish for them by casting out live crab. If they're deep, you can also jig with crab. You'll quickly find that the further down you go, the bigger the fish you'll catch when deep sea fishing.

From flats fishing to reef and wreck fishing you have so many choices in terms of where and how to fish for permit.

Due to the broad spectrum of "how to's" and "where to's" most fishermen include a charter fishing trip for permit as part of their vacation agenda.

By going out with a professional fishing guide, you know your likelihood of success just escalated. Plus these fishing charters carry the correct fishing equipment, and licenses needed for your fishing trip.

Once they come onto the Florida Keys flats however, their attitude changes and it becomes a totally different ball game.

You should also seriously consider going out with a professional Key West flats fishing guide so you can learn the tricks needed to catch one of these coveted fighters.

The reason going out with a Florida Keys guide is useful is that even though this species schools like other fish, when they're on the flats they're usually found alone or in small groups of two's and three's. Your fishing guide will know where to go, what to use, and how to present the bait.

Since this particular species of Florida fish is highly intelligent, when they're in the shallow waters of the Florida Keys flats they're ultra wary. This makes them the perfect match for anyone interested in a good game of fish chess.

Since they don't usually eat flies, you'll have to entice them to your fly without spooking them. You'll also need to put some serious effort into coaxing them by trying various crab fly patterns. 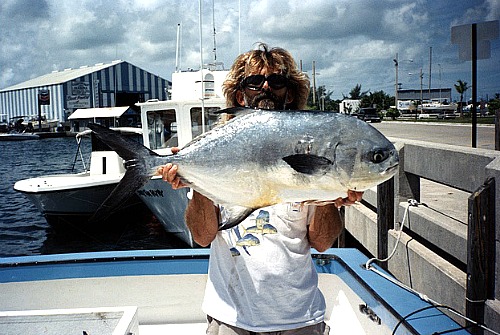 
Permit fly fishing is exceptionally challenging, and as such they've become something of a status symbol and magnet for avid fly anglers fishing the flats. Some days it may feel that it's impossible to catch one on a fly, but it just takes patience, skill, and lots of strategy.

Del Brown, in his illustrious career, was able to catch over 500 of this wily opponents fishing Florida Keys. One of the annual, favorite Key West fishing tournaments is held in his honor each July.

Since fly fishing for this fish is more challenging and not always productive, many anglers who go Florida Keys flats fishing prefer to use spin rods. This gear lets them easily use crab for bait. Without question, this is the surest way to catch this fighter, since this is one of their favorite foods.

People often are confused as to whether this fish and the pompano are one and the same. They are two separate fish but closely related and are both members of the jack family.

Unlike their other jack 'relatives', these two fish are excellent eating and are popular fare at restaurants.

The key difference between them is size. Pompano are considerably smaller, averaging about 2 pounds. In comparison, it's cousin has a world record weighing in at over 53 pounds.

When both species are young, they'll often school together. This fact combined with their similar appearance, excluding adult size of course, is one of the reasons the State of Florida has changed the size restrictions and number of allowable fish kept per day/per person.


Permit are without question the bulldogs of the Florida Keys flats. They have incredible stamina, strength and good speed. When they take the hook, they'll run long and hard.

When you finally get them near the boat, the action starts up again and this just keeps repeating until you and the fish are equally worn out. Since you're fighting them on light tackle, you'll realize that pound for pound, they're the all time big fighters of the sea.