Florida Keys tarpon fishing is often what first comes to mind when anyone thinks of Florida Keys sport fishing.

Why? Well the reasons are many, and most likely each Florida sport fishing enthusiast has a favorite answer.

However, some of the more common reasons why tarpon fishing is so popular is that they're found in plentiful numbers throughout the waters of the Atlantic, and the Gulf of Mexico.

Tarpon swim in the channels and they like to hang out around bridges.

In fact in Islamorada tarpon fishing is particularly good. The same is true for bridge fishing for tarpon in the Marathon FL area. Plus the Bahia Honda and the Old Seven Mile Bridge are reliable Florida Keys fishing hot spots.

Florida Keys tarpon fishing is also great in the backcountry, and in the shallow Key West flats.

Another reason this monster prehistoric fish is such a huge favorite, is that they can be caught a number of ways. Unlike permit or bonefish, they're also a relatively easy fish to catch. Basically they're open to just about anything you toss their way.

Knowing this is such a popular fish to catch, you want to make sure you have the necessary gear so you're not the only one who doesn't succeed in your quest.

For many, the easiest, and most cost effective thing to do, is plan a tarpon fishing trip with a qualified Florida Keys fishing charter.

They take the work out of the trip, and you get to have all the fun.

Maturing between 7 and 13 years, these prehistoric creatures are one of the hottest Florida Keys attractions. Each year, sport fishermen flock to the area to take advantage of the annual tarpon migration in hopes of catching the big prize.

To sustain this passion, there are several Florida Keys fishing tournaments focusing on tarpon fishing each year.

Even though they live in the region year round, the best Florida Keys tarpon fishing starts around the end of February and runs through to September.

This is when the larger migrating tarpon come into the area and begin their annual spawning journey along the Gulf Coast to Texas. During this season, Key West tarpon fishing heats up, and it's a good time to plan a Florida Keys fishing vacation.

Spawning starts in earnest around May and goes through September. During this time, each female can lay as many as 12 million eggs.

They follow along Florida's West coast, passing below the Florida Panhandle, and along the shoreline from Alabama, Mississippi, Louisiana and finally to Texas. They then make the long journey back.

The migrating fish are typically larger than the resident tarpon. They can be over 8 feet long, usually go well over 100 - 150 pounds, with many exceeding the 200 pound mark. The largest tarpon on record was over 283 pounds.

The resident tarpon are usually smaller, ranging from 8 pounds to 75 pounds with smaller numbers reaching upwards of 150 pounds.

There are so many different ways and places you can fish for tarpon, but you still need to have an understanding of this large and prehistoric fish. That's why going out with any of the better Florida Keys fishing guides can make a difference.

They know you can surf fish for them, wade out to them, even kayak fish for them. You can drift crab or pinfish to them, sight fish and cast lures to them - just about anything in your fishing arsenal is going to work when it comes to tarpon fishing Florida Keys.

In fact tarpon fly fishing is fast becoming one of the hottest new techniques for catching tarpon. When you consider their size and strength, this makes for an exciting and challenging battle, especially when using light weight tackle.

In this interview with International Fly Fishing Guide Bob Guard, he explains about an interesting technique he developed to improve his tarpon fly fishing ability. It's quite an amusing story and it will certainly provide a helpful and even novel technique for anyone looking to hone their fly fishing skills.

Tarpon are also amazing fighters which is what makes hooking them so exciting. They'll give you a run for your money that you won't soon forget. 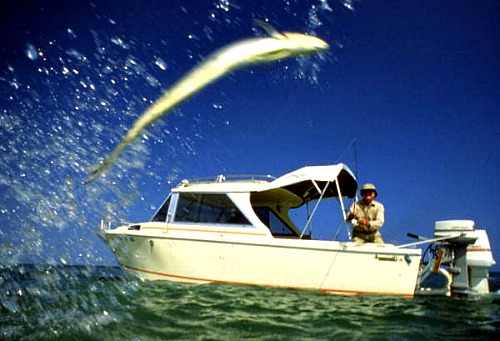 When Florida Keys tarpon fishing the excitement is the battle. They'll jump, roll and fight you until you're so bone tired, you'll wonder if you're ever going to bring the beast in. The battle can often rage for an hour or more, especially if you're good at working your fish.

The key to Florida Keys tarpon fishing however is actually hooking one. Yes - they'll take just about anything you throw their way - but it's setting the hook that can be the problem.

That's because tarpon have very bony, hard mouths. The trick is - once you feel them at the end, tighten your line and give 2 or 3 quick, hard jerks, and you should have the tarpon hooked.

If you're planning on Florida Keys tarpon fishing you're in for an hour or more of exhilarating, thrashing and bone weary excitement you'll savor for a lifetime. However, since they're not a particularly tasty fish that's about the only thing you'll be savoring since they won't make it to your dinner table.