Florida Keys sailfish and marlin are one of the all time best Florida Keys fish to battle.

There are a number of different billfish species found in the waters off the Florida Keys.

Except for swordfish, these billfish have very similar characteristics.

First, they hunt for their food the same way. They race through a school of intended prey, slashing and stunning them with their long bills, then they return to feed.

Second, they all feed at about the same water depth.

Third, they inhabit the same waters and follow the warm water currents of the Gulf stream.

Since there's so much similarity in the feeding and ranging habits of these billfish, when offshore fishing Florida Keys waters, you'll find that a day out with any of the Florida Keys fishing charters will produce any one or more of these hard fighting species.

There is a true art to fishing for sailfish and marlin. One of the biggest tricks is knowing where they are traveling, and then being able to spot them.

Sightfishing plays a large role in targeting this popular fighting fish. You need to keep an eye on the horizon, and watch for them as they break the water.

The thrill of fishing for this particular Florida fish is why Hemingway became so addicted to sailfishing. Almost everything else pales in comparison.

It's the combination of their speed, beauty, and intense fighting capability that makes them one of the most popular of all saltwater fish to target. It's also the reason why novices and seasoned pros alike vow to include a saltwater fishing charter for these billfish on their 'bucket list' of must do activities.

Looking For That Trophy Sailfish?

When fishing Florida Keys sailfish are caught in the Gulf stream off the Atlantic coast all year long. However, they're most plentiful in April and May.

When it comes to sailfish fishing Florida winter months are better. You'll typically fish along the reef lines and be in about 120' to 200' of water.

Without a doubt, this is one of the most beautiful and exciting Florida Keys fish to target. Two of their most outstanding features include their long, pointed spear-like bill which is part of their upper jaw, and their large, dark steel blue sail fin that often stands erect along it's back.

Their unusual and beautiful dorsal sail fin is offset against the dark violet blue of it's body. The sides of the sailfish slowly blend down to lighter tones of blue/gray or even silvery white, making sailfish visually stunning. Combined with it's elegant sleekness and long spear-like bill, sailfish are the stuff a Florida sport fisherman dreams about and prized mounted trophies are made of.

A strong fighter, sailfish are capable of short bursts of speed upwards of 60 mph. They also typically measure between 6 and 7 feet in length, with an average weight of around 50 pounds. 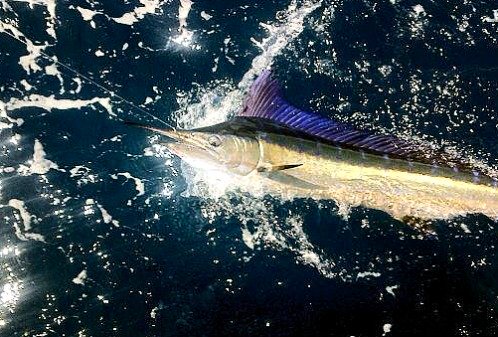 
However, sailfish can reach or even exceed 100 pounds. When you have one of these big brutes at the other end of your line, you'll need to brace yourself. Once they turn on their afterburners, they're going to take you for one heck of a ride.

Since they're considered the king by many sport fishermen, targeting them has become extremely popular. On average each year, 16 Florida Keys fishing tournaments are dedicated to this incredible specimen alone.

Florida Keys sailfish are also aggressive foragers, and they go where the food is. They eat squid, tuna, mackerel, and other smaller fish, with ballyhoo being one of their favorites.

Their modus operandi is to charge through a school of fish, striking blows to their prey with their bill. Once they've stunned or injured their prey, they then return to eat.

Since sailfish travel where their quarry lives, Florida Keys fishing charters know they can be found in water as shallow as 30 feet to 200 feet deep. 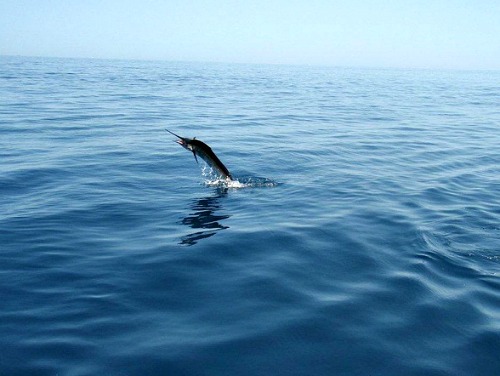 
This means you have several excellent options available to you when deep sea fishing Florida Keys.

Trolling or kite trolling works well. This is especially effective if you hook live bait fish on a line and then slowly bounce or skip the fishing bait along the top of the water's surface.

You can also throw out a net of live bait fish, preferably ballyhoo, which is a sailfish favorite. The sound of bait fish jumping along the top of the water is the sound of a ringing dinner bell to a sailfish. This enticing sound will bring them screaming to the surface after their favorite prey.

Once they surface you can sight fish for them, using either live bait or lures on light weight tackle. Since they have very hard bills, when they take your hook you have to jerk quite hard, perhaps even several times to make sure the hook's properly set.

When you factor in their size, strength, weight and acrobatic skills, if you use light weight tackle, you'll have a thrilling dance with these spectacular fighters. 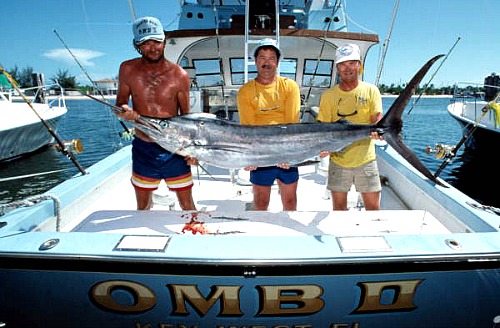 
When Florida Keys fishing for sailfish you can go as light as 12 to 20 pound test line. You will also need to use a 7 foot medium action rod with enough strength and flexibility to pull a fish back up from the depths when they race out and try to dive.

If you do this, you'll have a good combo that will let you feel the terrific fighting action. You'll also want to not rush things. Remember to play the fish, let him run and jump a number of times, and once he's tired, then bring him in for the release.

Another great perk about deep sea fishing Florida Keys sailfish, is that if they're not biting that day, you're in the area where other pelagic species are found.

The bait you've brought along is good for these fish too, and you can catch swordfish, wahoo, mahi mahi, amberjack, and of course shark.

Marlin is without a doubt the most exciting of all fish to catch. This is because of their size, strength, endurance and acrobatics.

It's nothing for a marlin to battle it out with you for a number of hours. They'll take your line and race out long and far.

They'll dive deep, and make multiple high acrobatic leaps into the air. Basically they'll do everything in their power to break free of you and your line.

Knowing this, Florida Keys sport fishing enthusiasts have to be up to the challenge a marlin presents. Averaging anywhere between 150 - 600 pounds, and eleven feet or more in length, even an experienced sport fisherman will be bone tired when the fight is over. Weary for sure. Happy and exhilarated - absolutely.

Marlin are not as prevalent as Florida Keys sailfish and other larger pelagic species, but they can be found all year. The best times for marlin fishing in Florida is usually early fall and again in mid-summer. 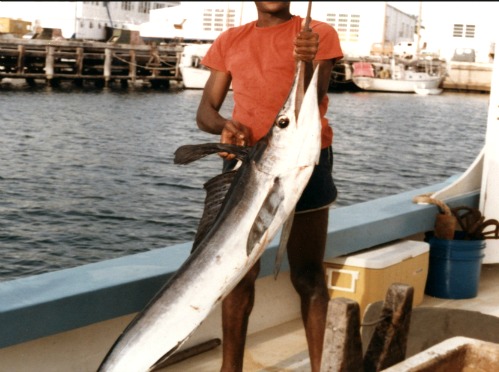 
Included in the billfish family, blue marlin are much larger than Florida Keys sailfish. Somewhat similar in color, their bodies are a deep blue-purple and they have a much smaller crest-like dorsal fin. The sides of their bodies slowly fade to a silvery white on the belly.

Marlin also eat many of the same Florida fish that sailfish and other pelagic species do. This means they're eating shallow like the other great game fish.

This is one of the reasons why a day spent sport fishing Florida Keys waters is so exciting. When you throw out the dinner invitation, you never quite know who's going to accept. You can be in for quite a surprise if a granddaddy blue marlin comes racing up looking for that tasty ballyhoo treat. 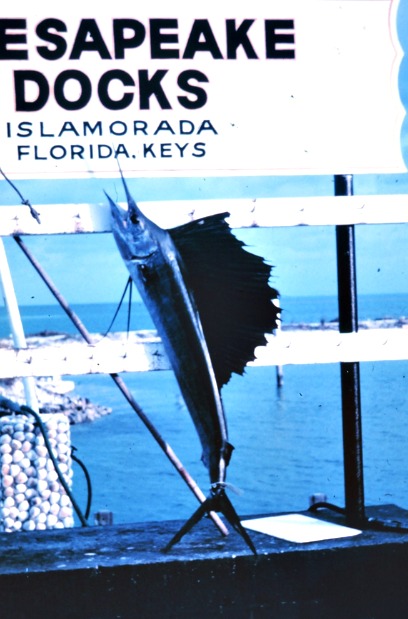 
Another billfish that's not so common, is the white marlin. This is a close cousin to the blue marlin with more white covering the lower 2/3 to lower half of it's body.

It's also considerably smaller than a blue marlin, and is perhaps about 1/3 larger than a Florida Keys sailfish. Their weight typically runs between 80 and 170 pounds, and their average length is about 8 feet. However, when it comes to fighting power, size doesn't matter. These beauties have the looks and the power to turn heads and peel off plenty of line.

When deep sea fishing Florida Keys sailfish, marlin and other species of billfish are heady opponents to target on your next Florida Keys fishing vacation.