Offshore fishing for Florida Keys swordfish is a different experience than fishing for other billfish.

Even though this species is a billfish, they're a broadbill fish.

The difference is, marlin and sailfish have a long spear-like upper jaw.

This Florida fish has a flatter, more sword-like protrusion, hence their name.

Another difference between the species is that these broadbills tend to live, eat and swim much deeper than sailfish and marlin. This makes deep sea fishing for them even more challenging.

Something else that sets this species of billfish apart, is that Florida Keys swordfish are a very tasty fish. This means that when they're caught, they're usually kept.

This is in contrast to sailfish and marlin where catch and release is commonly practiced.

Fishing for swordfish is also likely one of the most challenging fishing trips you can include on your Florida Keys vacation. Not only because they're fierce fighters, but because they're usually caught in either extremely deep water or at night.

Both of these fishing options involve their own set of unique challenges and require the appropriate fishing gear and experience.

In either case, the law of success greatly diminishes if you don't have the necessary skill, or fishing gear to begin fishing for this fierce pelagic species.

Florida Keys fishing charters that specialize in fishing for swordfish are simply the best way to go. If you're serious about targeting this particular species of fish then you need to go out with a fishing guide who's as serious about it as you are.

Whether you're wanting to go deep, or fish closer in at night, these swordfish experts have what you need to make your fishing trip a success.

One commonality Florida Keys swordfish have with the other billfish, is that the females tend to be the longest and heaviest of the group.

The average length for Florida Keys swordfish is around 7 feet, with records showing that lengths of 15+ feet have been attained. Their broad bill also allows for about 1/3 of their total body length.

Florida Keys swordfish are also very large and can easily reach or exceed the 200 pound mark. In fact, records show that broadbills have exceeded 1000 pounds.

As of June, 2012, the standing State record for a swordfish was 612.75 pounds. This fish was caught in 1978 off Key Largo. This does not mean that larger ones haven't been caught since that date, because they certainly have.

On April 4, 2012, about 30 miles south of Marathon FL a 683 pound broadbill was caught. It took two hours to pull this monster fighter fish in. However, since it was caught on an electric reel it didn't count for the IGFA records. 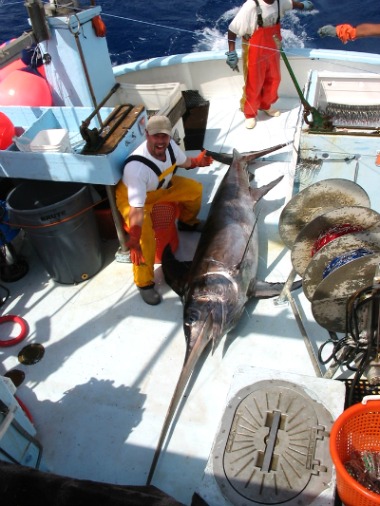 
Just a few days earlier on March 25, another huge Florida swordfish was caught off Islamorada FL on electric reel. This brute weighed in at 520 pounds.

An oddity about both these Florida Keys swordfish, is that over and above their impressive weight, both were caught during the daytime. This is rather unusual for two reasons.

First, this species of billfish is primarily nocturnal. This means night fishing will produce the most productive results when Florida Keys fishing.

Second, fishing for them during the daytime means they're much deeper. In the process of attempting to bring them up this greater distance to the surface, they often become unhooked.

For two record size swordfish to have been caught in daylight hours less than two weeks apart, is truly exciting. 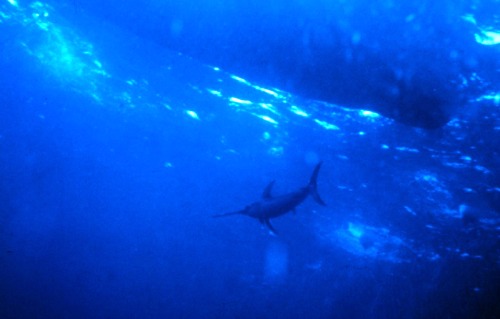 
These fish are also known for their nasty tempers. Reports of these fish attacking boats are not unheard off.

A particularly wild experience happened at 2,000 feet in depth where swordfish like to swim. The Alvin, a small submersible research vessel had descended to the seafloor to take geological and geophysical surveys of the area when it was rammed by a swordfish.

The swordfish hit the submersible so hard that it's bill got snared into a portion of the vessel's outer layer. At this great depth, any threat to the integrity of the sub needed to be treated seriously, and so the sub rose to the surface, only to find the swordfish attached and dead.

Fishing Florida Keys, swordfish are caught more often in early Fall, but there's a few fishing tips you should know in advance.

If you're fishing for broadbill during the day you're going to have to bring heavier fishing equipment. This is because you're going to go on deep sea fishing trips using deep drop fishing techniques.

Offshore fishing Florida Keys you'll have to plan on going as deep as 1600 feet or more. In fact, these Florida swordfish have been found as far down as 3000 feet. This is why deep drop fishing makes the most sense. However, if you plan on using deep drop fishing techniques, you'll also need to have the heavy duty electrical gear and lights attached to your line.

Florida Keys fishing at these depths has a plus side however. You'll usually bring up bigger fish than you'd normally catch when night fishing closer to the surface.

Day time fishing does require a lot of strength and endurance. It takes considerable effort to haul a heavy, fighting mad fish up from a 1000+ feet, and then wage battle for 4 hours or more.

Plus the fishing gear for deep drop fishing is still quite expensive and for some anglers, the cost is too prohibitive. 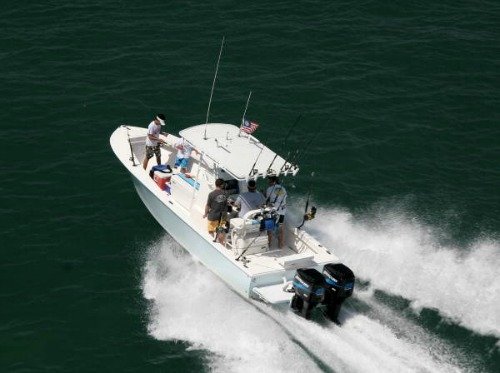 Night fishing however is perhaps the most popular way of catching Florida Keys swordfish. It's also more economical and easier to do than day time fishing.

Night fishing is a lot of fun, because it's usually productive. This is when swordfish typically feed so they're more inclined to take your bait.

While fishing for this broadbill, you'll often end up catching other species including shark which can certainly add to the 'wow factor' when you're fishing Florida Keys in the dark.

The typical procedure for night fishing is to drift fish using squid and other live bait such as mackerel, tuna, bluefish, and barracuda.

You hook the bait on floaters and set them at various depths. Then as with deep drop fishing, you attach lights near the bait to attract the fish.

Since broadbills tend to live in the deep darkness of the ocean, they're often referred to as the denizen of the deep, the devil of the deep, or the prince of darkness.

Not hard to imagine why, once you've hooked one on your line. They fight devilishly hard, and give you a bone-racking workout you won't forget.

Since they love the deeper water, once you've hooked one, swordfish often race towards the bottom of the ocean, ripping off your line faster than you can imagine.

Your only hope is to stop them from going deeper, bring them back to the surface, and play them in the hopes of tiring them out.

The key words in that previous sentence are "hopes of tiring them out". That is much easier said than done. A large swordfish can battle you for 4 - 5 hours, even longer. This is a Florida fish that tests your skill and strength every step of the way.

When you consider these swordfish facts:
1. They can reach speeds of up to 60 miles per hour
2. They'll take your line and run deep
3. They'll race to the surface and perform aerial acrobatics to get loose
4. They'll fight you for 4 - 5 hours, perhaps longer
5. They have substantial body weight and length which works against you

Once you do finally manage to land a Florida Keys swordfish, you'll be as exhausted as you are exhilarated. 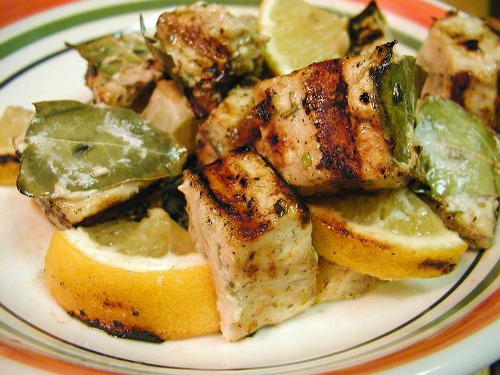 Perhaps it's a good thing that unlike the sailfish and marlin, swordfish are tasty. That's because often the only way you'll bring one in, is by harpooning it and then using a gaff. Once you do this, you're obviously in no position to practice catch and release.