Roseate Spoonbill Is A
Colorful Oddity Of Nature

One of the more unusual and easily identifiable Florida birds is the roseate spoonbill. The colorful plumage, along with it's unusual flat, shovel like beak makes this bird a photographed favorite.

However, spotting one after the cold winter of 2010 became a rarity as they basically disappeared from the region.

In late 2011, and early 2012, sightings of this unusual Florida bird began to emerge once again.

Particularly good viewing areas for this brightly adorned beauty are at the west end of the Everglades National Park at Flamingo Visitor Center.

Once almost extinct, thanks to it's beautiful plumage, this colorful and unusually structured bird is still sought after as a collectors item.

However, instead of being harvested for it's brilliant feathers, it's now sought after for photo opportunities. It's beauty, interesting colors and formation has also inspired the creativity of artists, jewelers and writers.

Today, we not only preserve their image in various forms such as previewed below, we protect them physically. These measures has helped to repopulate the once dwindling species.

Paurotis Pond is a popular breeding and nesting area for not just this wild bird species. Here bird watchers will also catch glimpses of the great blue heron, the endangered wood stork, white ibis, anhinga and numerous other wild birds and wading birds.

As part of their protective measures, the Everglades Park closes access to the Paurotis Pond viewing area during the sensitive nesting season which is January until sometime in late May. Access to the area reopens once bird nesting activity has completed. 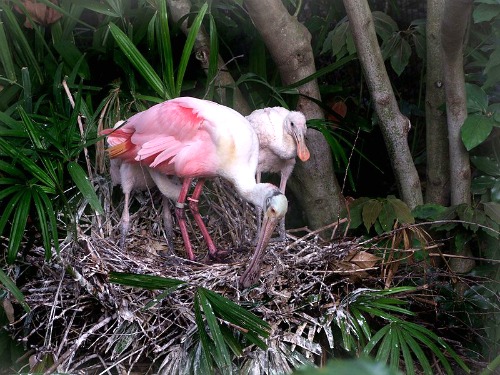 The roseate spoonbill is a relatively large wading bird. Standing approximately 34 inches tall, they also have a substantial wing span of about 51 inches. They have bright red eyes and legs, and the feathers at the tops of their wings are also red.

The spoonbill's plumage is punctuated with orangish-pink tail feathers and white adorns their neck, back and chest. The feathers covering the rest of their body are the impressive shades of light to dark pink. Their heads have a pale greenish color, and like their ibis relatives, their heads are bald. 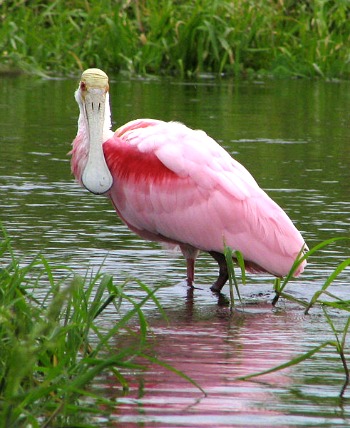 Like the flamingo, the color of this bird is determined by two factors. They predominantly feed on crustaceans such as shrimp and this helps give their feathers the pink coloration. Age is another determining factor in their coloring. The older they are, the darker their feathers, which no doubt has something to do with a build up of coloring in their body from their crustacean diet.

These wading birds are gregarious and are often spotted with other species of birds. They typically feed in the early morning or late afternoon hours. They can be viewed walking through the water, heads down, beaks moving back and forth through the water in search of food. Once a fish, frog or other food item is detected, their broad flat bill snaps shut, the prey is captured and then swallowed whole. 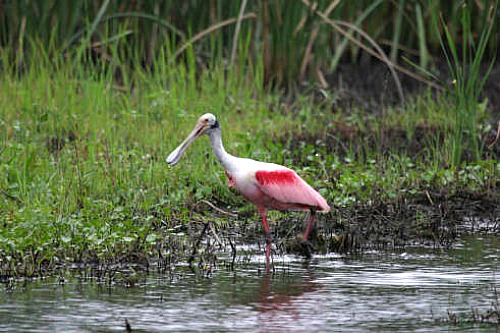 As beautiful as their foliage is, the same cannot be said for their voices. This Florida bird produces a series of low grunting, almost staccato like sounds, similar to "taddataddata." The emitted sounds are rapid and machine gun like in succession, followed by a few bars or rounds of what sounds like heavy breathing. Fortunately spoonbills tend to be relatively quiet birds, and are usually only heard during breeding season.

These are also amazing birds to watch in flight. Unlike heron and other wading birds, they keep their legs and necks completely outstretched and you can almost feel the air move around you as they go by. Their large powerful wings swoosh through the air, punctuated by a glide followed by more swooshing.

Unlike their ground nesting counterparts that live in other parts of the southeastern U.S., Florida's spoonbills tend to nest off the ground, in the mangrove trees. This has helped keep their nests safer. However predators are always on the look out for tasty eggs. 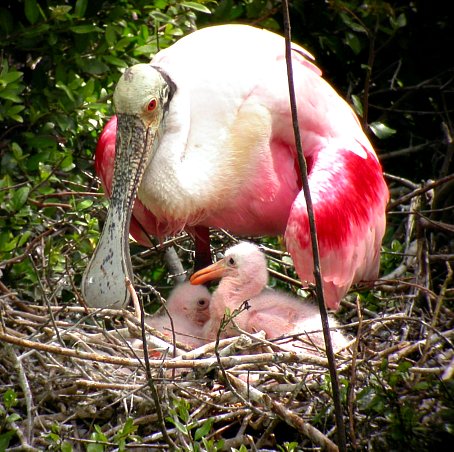 Roseate Spoonbill In Nest With Two Chicks
Courtesy of www.nps.gov

Unfortunately, juvenile pythons also climb trees, and this invasive species poses a threat to not just the eggs, but to the birds roosting in the trees. Not only do these snakes attack the birds in the trees, pythons lay in wait and ambush the birds while they are wading and fishing for food.

For this species of wading bird, the nesting season involves the laying of usually 2 - 5 whitish colored eggs with brown spots on them. When the young are hatched, they have yellow-orange legs, beaks and feet and the chicks are mostly naked, covered only by a sparse dusting of feathers.

Spoonbill chicks are fed by the parents who regurgitate food into their throats. At about 6 weeks, the young become fledglings but are much lighter in color than their parents, with feathers still covering their small heads. 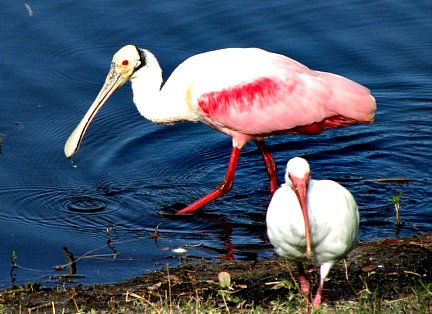 
Unfortunately as with the Great White Heron, their beautiful feathers were almost the cause of their total demise. During the peak of the hat making era when colorful feathers were in vogue, this species of wild bird was hunted extensively, causing it to eventually be added to the endangered species list.

Fortunately, in Florida they've made a comeback from numbers that once were reported in the 30's to a breeding population now numbering about 1,000 pairs.

By far, the roseate spoonbill is one of the most physically interesting and beautiful birds found in the Florida Keys. To witness large groups of these birds feeding or roosting in a tree is a colorful spectacle that only mother nature can provide.