Florida Keys bonefish are probably one of the most thrilling of all Florida Keys fish to catch in the backcountry.

However, angling for the gray ghost is not for everyone. It takes considerable patience and skill.

You'll soon notice that these fish are always on the move, constantly guarded and watching their surroundings.

This activity, combined with their amazing speed makes them a thrilling catch.

If you feel that you're up to the challenge, you'll undoubtedly discover that this is probably the most addictive form of Florida Keys fishing there is. In fact, you may decide that it feels more like a hunting expedition than a fishing trip.

One of the reasons sport fishing Florida Keys for bonefish is so challenging, is that this species of fish is difficult to see. This is due to their beautiful, reflective opalescent like scales which successfully camouflage them. 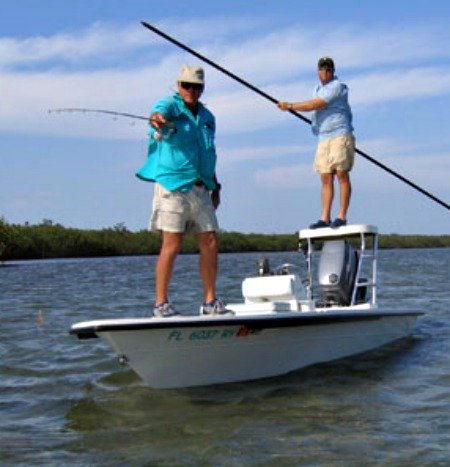 
It goes without saying that if you can't see Florida Keys bonefish, you're going to have a hard time catching them. This means you'll absolutely need to have a good set of polarized sunglasses.

The glasses will help restrict the severe glare on the water, and make it easier for you to catch a fleeting glimpse of this silvery ghost.

Equally obvious, is that your Florida Keys fishing trip will be significantly more productive and exciting if you actually catch some of these wily, skittish saltwater fish.

Toward that end, you'll find your best results fishing for bonefish will come by going out with a Florida Keys fishing guide - at least for the first day or two.

You'll also learn some of those critical 'secrets to success' tips that an experienced Florida Keys fishing charter Captain has and is willing to share with you.

The Florida Keys is considered to be the best place for catching the largest bonefish. Even though the ones found in these waters are much larger than those found elsewhere in the world, these fish are still relatively small.

However, if you're lucky and smart enough to catch one, you'll find that the Florida Keys bonefish will average between 2 and 14 pounds of pure, high energy.

These are one of the most sought after fish to target due to the challenge they present and because of their lightning speed. Fortunately they're found in the Florida Keys all year, with the best time to catch them occurring from March to November.

These wily fish go by several names; phantom fish, gray ghost and banana fish. However, no matter what you choose to call them, you’ll be glad you saw them. You'll also discover that seeing them can be much easier than catching them.

This species of Florida Keys fish is found throughout the entire region, but the Upper Keys, particularly the Islamorada Florida area is known for it's healthy concentration of larger phantoms.

The Middle Keys and Lower Keys also have strong numbers. Fly fishing Key West or going out to the Marquesas Keys with Key West fishing guides are popular ways to target these wary opponents.

Florida Keys bonefish are a great sport fish to catch, but as their name implies - they’re definitely not a good eating fish. Not all fish have to be caught for eating however. Sometimes it's the pure pleasure of that fabulous ride that makes it all so worthwhile.

You also have several options in terms of how to catch these phantoms.

They like to feed in the shallow waters of the back country. Once they come in to feed, you can start fly fishing the flats or spin casting for them.

You can also chum to help bring them in faster and closer. If you're using bait, the scent of shrimp or crab will draw them closer so you can discreetly place a well cast fly to them.

Another popular angling method is to pole fish, stealthily moving your boat through the water to position yourself. From your platform you can then sight fish, but you must make sure you have a perfect cast, one that entices the fish without spooking it.

You can pole around in the shallow waters or sit up on the flats and throw the line to them. Fly or spin casting works well and since you're able to use lightweight tackle, such as a number 7 to 9 weight fly rod, when you hook one, you're in for one heck of a fight.

Saltwater flyfishing, especially in the flats is unlike fly fishing in a Pacific Northwest river where your fly drifts. When Florida Keys bonefishing, you throw the line to them, so precision is key. Since they're guarded and move fast, this takes considerable skill and finessing.

Practicing your cast is probably the most important pre-planning you can do before bonefishing Florida Keys flats or backcountry waters.

You should practice casting into the wind, making long casts, and aiming at a specific target. You need to be able to make fast, accurate and long casts reliably before you hit the flats. Once you do, and you're in hot pursuit of this racer, you only have microseconds of response time once you spot and target this constantly moving ghost.

You may also want to read this helpful interview with International Fly Fishing Guide Bob Guard who explains about some of the techniques and equipment needed to catch bonefish, tarpon, permit and other popular Florida Keys fish. 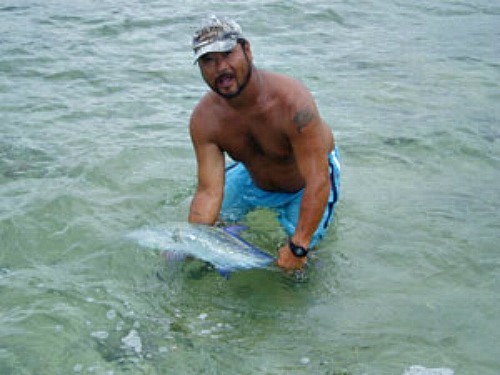 
You'll also discover that these phantoms are typically found in about 1 foot of water or less. You'll need to keep a watchful eye as you look for their fast moving shapes that come and go at lightning speed.

One of the more helpful Florida Keys fishing tips related to bonefish is that they like to hang out where there's grass on the flats. Knowing this will make your fishing more productive, and if you watch closely, you can also find them digging in the sand for food.

This is called tailing, and when they're doing this they're basically caught up in the moment, more oblivious to their surroundings then normal. This also means they're not going to spot your well placed fly several feet away. They'll only notice your fly if you drop it in their immediate vicinity.

The good news about bonefishing is that when they're tailing, they're less spooky. They're not on the prowl, they're feeding, so they're inclined to take what you present without getting spooked and racing off.

With their superb speed and natural built in fight, you'll have caught yourself more then just a Florida Keys fish. You'll have caught a lifetime of memories and great stories rolled into just that one thrilling moment.