Mallory Square in Key West is where the sun kisses the sea each night in a glorious display of vibrant, shimmering colors.

This alluring Key West attraction is the hub or magnet that pulls everything in Key West together.

It's also the perfect gathering place, no matter the time of day, or the season.

Positioned at the very northwest corner of the island, the beautiful cobblestone paved focal point rises 20 feet above the water's edge.

From any angle you can enjoy magnificent views of the Gulf of Mexico, with Sunset Key being the only obstruction to your panoramic view. Located about 500 yards from shore, luxury homes and resorts comprise the foundation of this beautiful 27 acre beach rimmed island. 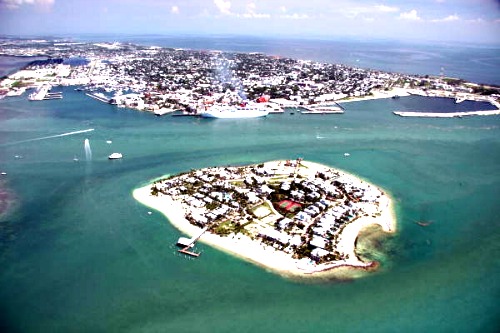 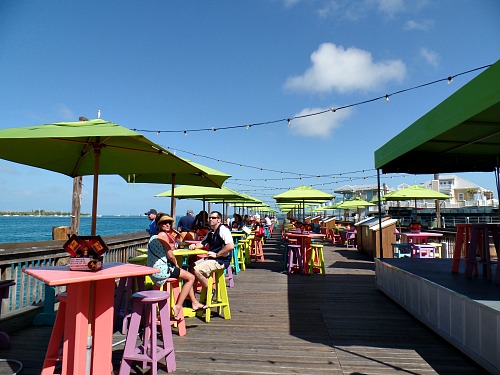 
Plus the boats that dot the water are an incredible combination of massive, gleaming Key West cruise ships, yachts, speed boats, schooners and the sleek and very impressive tall ship, Western Union.

You'll also notice that more than just crowds of people congregate in the area. In typical Key West fashion, you'll find that many of the City's well fed roosters like to strut their stuff here. Unafraid, the "Conch eagles" stroll through the crowds, pecking away at tidbits and treats that have dropped on the cobblestones. 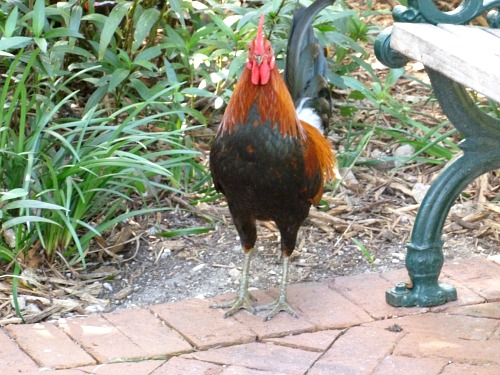 
When you arrive at Mallory Square in Key West, you'll quickly discover that it's easy to spend several leisurely hours. Between the breathtaking views and the brightly painted kiosks, time quickly slips away.

Plus if you're hungry or thirsty, there's no shortage of selection. Whether you want something cold and frosty, have a craving for conch fritters, or want to sample Cuban food for the first time, you'll find something to whet your whistle and your appetite. 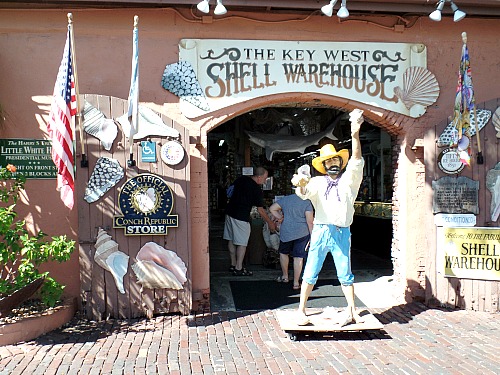 
Mallory Square also has a good selection of gift and trinket kiosks, where you can pick up all manner of touristy items. You should know however that cash is not the preferred method of payment, it's the only accepted form.

Also, since this is the place to be, you can expect to spend a bit more on certain items that are available for less, further down Duval St. 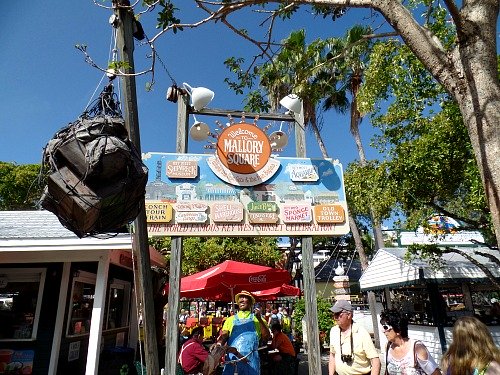 One Of the Colorful Entrances To The Square

Since the various goods on display can be more expensive than further down the street, there is one advisory caution you should consider. If you see something you genuinely like, and are coming back later that day - hold off on the purchase. 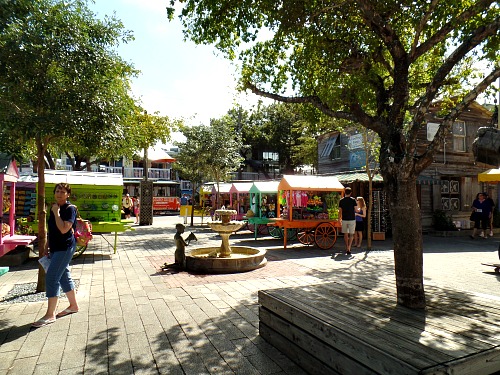 
The reason is, by 5:30 the Key West cruise ships depart and so do their passengers. This hoard of shoppers are the substance the local retailers rely on.

Realizing that evening is approaching and a large percentage of the potential buyers are gone, merchants will often discount their products to quickly move what's left.

That being said, there are several caveats to this theory. If you're not coming back to the Square later in the day, grab it now. If you're worried about it being the next to last one and not available when you do come back, snap it up right away. Otherwise - wait and save yourself some vacation money. 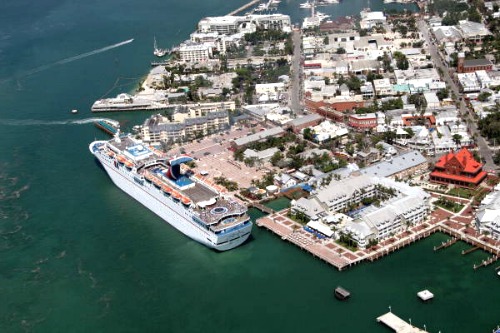 
Another way you can save money is by getting tickets and deals in advance on line. This square is the major hub for Key West activities - it's where the different tours serving the area operate.

At Mallory Square you can buy tickets for almost any Key West attraction or activity. This includes the trolley or train tours which run continually through the Old Town providing convenient hop on and hop off service. There's also combination tour packages to museums, and tickets for fishing, sailing, and diving charters available.

However, you can usually get the cheapest prices by getting your tickets in advance on line. You'll save money, and time plus you'll guarantee your admission to the activities and attractions you're most interested in, while on your Key West vacation.

Of course the continual hustle and bustle of this Key West hub is one of it's most charming features. Adding to the festive atmosphere are musicians, jugglers, magicians and other street performers. Their amusing acts play out through the day and gain momentum as the crowds surge to this popular congregating spot to participate in each evening's Sunset Celebration. 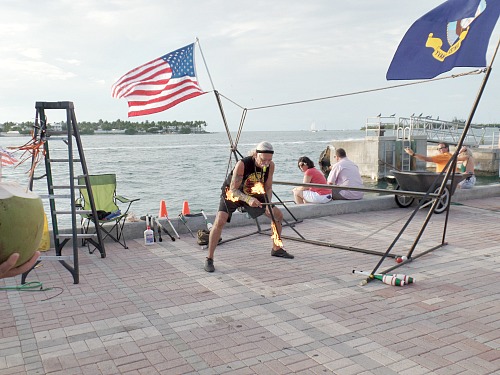 
Technically located at 1 Whitehead Street, this rallying centerpiece of Key West is more than just an address. Geographically, it's outlined by the Gulf of Mexico on one side and Wall Street on the other. Two main streets, Whitehead and Duval both dead end at this bustling hot spot.

Adjacent to the Square are several interesting Key West attractions including the Sponge Market, Waterfront Playhouse, Key West Aquarium, and several museums including the Custom House, and the Key West Shipwreck Historium. A few blocks further to the east, and on the north shore is the Historic Waterfront of Key West Bight. 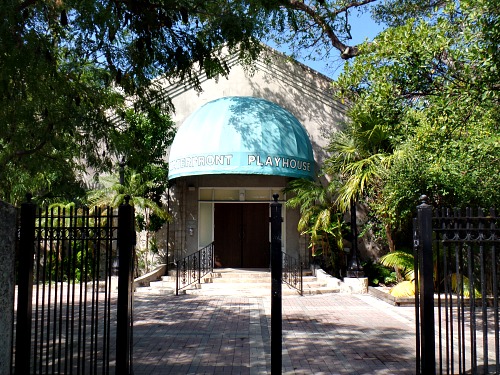 
You'll also soon discover that no matter where you stroll, there's no shortage of food or drink. Brightly decorated or historically shabby, the Key West bars and restaurants that line this popular meeting spot exude music, laughter, and exotic aromas.

History Of The Square

This popular hub was also the original, main port of Key West FL. As such, it has a long history of being the prime center of activity in Key West. In bygone days it was also a major gathering place, but not for the same reasons people flock to it today.

In the era of swashbuckling, rum swilling pirates, this was one of their favorite anchoring spots. Obviously drunk and disorderly behavior was rampant as were a variety of illicit activities. Then in 1823, the United States Government declared war on the pirates of the Caribbean.

Commodore Porter, and his Mosquito Fleet of agile ships, successfully tracked and imprisoned the majority of buccaneers who were reeking havoc on shipping and the islands. By 1825, piracy had become just another word in the dictionary, instead of a major, regional maritime threat.

Once piracy had been curbed, the Square became the focal point for the wrecking industry. It was here that the brave men who rescued passengers and cargo from grounded ships congregated.

Over the centuries it has also served as a mustering point for forces fighting in different wars. The significant role Key West has played in military history dates back to the East Martello and West Martello Towers, Fort Zachary Taylor, even the Dry Tortuga's Fort Jefferson. 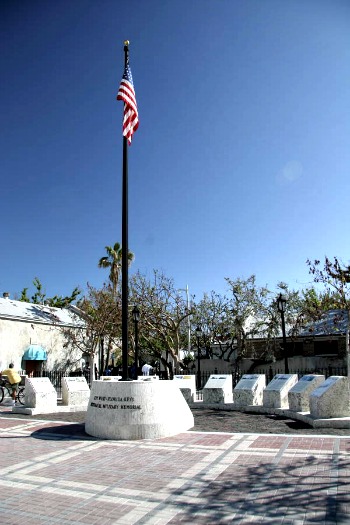 
In honor of the military, who's presence in Key West FL has been vital to the nation's safety, the city established the Florida Keys Historic War Memorial.

There's also a marker with the names of Florida Keys military personnel who lost their lives while serving their country.

A great place to center yourself, and escape some of the cacophony that constitutes Mallory Square, is the Memorial Sculpture Garden. This is a wonderful and relaxing place to visit, and even though one million visitors stroll through it annually, the garden somehow maintains a level of peaceful calm. 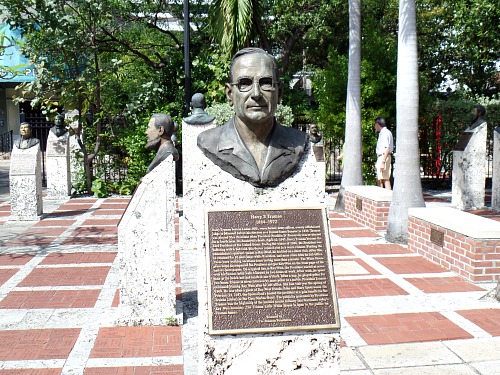 James Mastin, the sculpture behind this impressive work also created the towering statute, "The Wreckers". Standing 25 feet high, and 18 feet long, this Key West monument successfully captures the very essence of these brave men. Their almost daily task involved risking injury and death in their bid to rescue the lives and cargo of those wrecked upon the outlying reefs.

In reality, this garden is a memorial within a memorial. At first glance the impressive busts remind us of the life changing or culturally influential decisions these individuals made.

However, when looking down at the shaded brick path that leads you through the garden, another memorial becomes obvious. The bricks that make up the pathway are a woven mesh placed in honor of people who have contributed to the garden, or in tribute of a loved one who's life has come and gone. 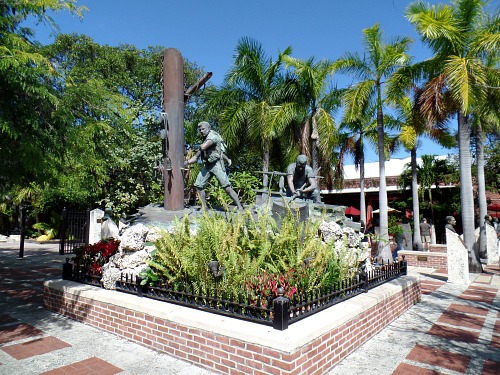 
No visit to Key West would be complete without spending time at Mallory Square. Yes it can be a busy, noisy place, but it's also charming, fun, and incredibly beautiful. You'll also find no shortage of photo opportunities, whether you're focusing on a sword swallowing street performer, or another of Key West's bedazzling sunsets.

You'll also see that like Key West, this place has a special, uniqueness all it's own. From dawn to dusk, and through the centuries, Mallory Square has beckoned. You too will discover how hard it is to resist her call. 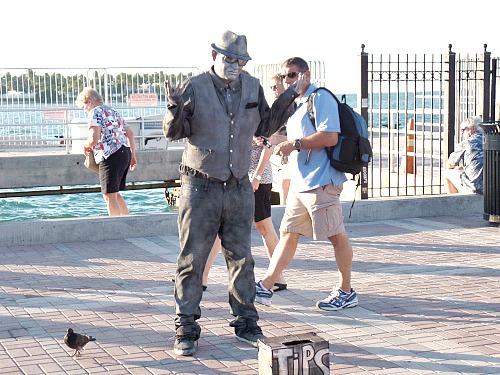