In the Florida Keys there are over 70 species of sea sponge ranging in size, color and texture.

Not only are they varied in appearance, they have colorful names aptly reflecting their physical attributes.

Just some of the more descriptive names labeling the types of sponges are chicken liver, vase, velvet, tube or stove pipe, and leathery barrel.

However, it's the colorful, giant barrel sponge that most captivates those diving Florida Keys coral reefs.

With hues ranging from deep salmon to purple, these giants, affectionately dubbed the redwoods of the reef, can tower over 3 feet in height.

They also have a tremendously long life cycle, with some appearing to have survived 2000 years or more.

Unlike many others in the Porifera species, giant barrel sponges also spawn, spewing sperm into the water to fall on receptive eggs. This broadcasting process is similar to coral spawning and is triggered by the lunar cycle several times a year. 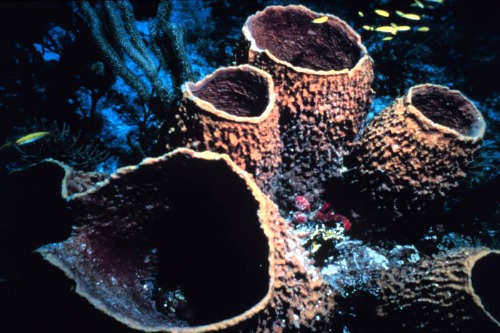 
In some areas, these organisms have also begun to compete with coral. As sections of coral reefs die off due to damage, bleaching, and other ills, sponges become the dominant organism changing the underwater landscape dramatically.

Lacking many of the standard physical characteristics common to other marine life, these primitive organisms have no specific organs, circulatory, nervous, or digestive systems.

They do however have a framework which serves as the foundation for their structure. A webbing of spicules forms a mesh creating the shape of the different types of sponges.

Depending on the species, the spicules will be large megascleres, or small microscleres. They can be made out of silica, calcium carbonate, or a collagen protein.

Not only do the spicules vary in size, and material, they differ in shape. They can be pointed, rounded, barbed, star shaped, knobbed, speared, even blunt.

However, the spicules do more than just form the body shape of these marine animals. They're the sea sponges deterrent to help ward off predators such as parrotfish, sea turtles, sergeant major, and yellowtail snapper. 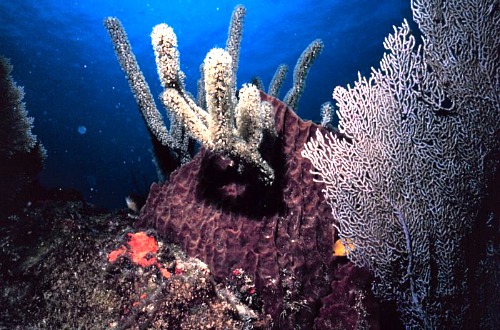 
For a predator or a Florida diver who comes into contact with a sponge, the end result will often be a stinging sensation that can last upwards of several days.

Ocean sponges are also like coral and other benthic marine animals in that they spend their entire lives on the sea floor.

Since they lack complex physical characteristics as well as the ability to move, ocean sponges survive by pumping water through the small holes in their body.

Armed with tiny whip like cells, they're able to beat the water, driving it toward them. This enables the absorption process which allows them to ‘feed' on the tiny plankton and other microbes that flourish in the surrounding saltwater.

The physical makeup of these prehistoric marine animals has real value in a number of arenas.

First, their method of feeding means they're capable of moving 10,000 times their body size in water per day which improves water clarity. This pumping action reduces the algae population producing a healthier coral reef ecosystem which in turn promotes coral growth.

Second, different types of sponges, especially the giant barrel, have tremendous longevity. This means once they're established in an area, they're able to play an ongoing role in controlling the water environment, stabilizing the immediate area.

Another reason these organisms play such an important role in the Florida Keys ecosystem is that they provide a home for smaller fish, juvenile fish, spiny lobster, bacteria and other vital organisms.

Scientists have also discovered that there is true pharmaceutical value to sponges. Some of the varieties studied have provided insight into successfully treating different forms of cancer including breast cancer and lung cancer. 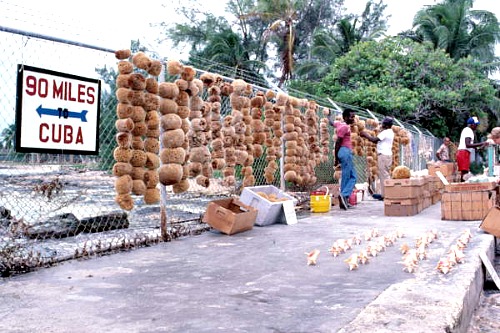 
In the 1800's, ocean sponges also played an important role in Florida's economy with Key West and the Key West seaport at Key West Harbor Bight being a major sponge distribution center. However the sponge industry lost it's momentum and slowly dwindled, with only a few commercial sponge fishermen pursuing their trade.

Today in the Florida Keys, sponge diving is prohibited and the only allowed method of harvesting of sponges is by hooking with a controlled regulation on size. However, further north in the waters of the Florida peninsula sponge diving is allowed in the deeper waters, with restrictions on species, location, and method.

Typically there are 5 types of sponge that are commercially harvested by sponge divers, with sheepswool, grass and yellow sponge being the most viable. By cutting, instead of ripping these marine animals from the ocean floor, they're able to regrow, ensuring the ongoing presence of sea sponges in the area.

This sustainability is an important part of the Florida wildlife conservation effort. The fact that sponges can regrow if cut, instead of pulled from the ocean floor, means they're also able to be 'cloned'.

This ability to regenerate new growth makes it possible to help repopulate regions that have lost sponge communities due to disease, pollution and other threats.

Since they can now be harvested safely, it's possible to enjoy 'guilt free', the therapeutic cleansing benefits of natural sea sponges like these available from Amazon.

As with most marine life, some of the more common threats are man related. Pollution, anchors, boat groundings, fishing hooks, debris, and predators can cause damage, detachment of the organism, and often death.

Between 1991 and 1995 another unusual incident occurred that had an adverse affect on these primitive organisms. During this period there were several phytoplankton algae blooms which caused widespread death to sponge communities found in the immediate areas of the blooms.

This bloom was responsible for severely depleting sections of the sponge community, altering the coral reef makeup.

Sponges are also affected by two types of bleaching, cyclical which has no lasting adverse affect, and fatal bleaching which like coral, destroys the organism.

These prehistoric organisms are also susceptible to severe damage or death if they're dislodged from their permanently affixed position. Storms, boat groundings, and disease are often the culprits responsible for ‘uprooting' ocean sponges. Unfortunately certain species are more adversely affected when detachment occurs, and for giant barrels this incident is usually a death sentence.

Another more recent, devastating threat affecting both the Florida Keys and the Caribbean is the sponge orange band or SOB disease. As it's name implies, lesions begin to form, eventually creating an orange band which quickly moves through the sponge's tissue. The result is complete bleaching, tissue degradation and eventual death.

Unfortunately for SOB, there is no cure. Death is rapid and typically happens within 6 weeks of contracting the disease. Also, SOB seems to affect the large barrel species more frequently. It is thought that this is primarily due to their ability to filtrate massive quantities of water which in turn exposes them to more disease carrying organisms.

Part of the Florida conservation program effort has been to help with coral reef restoration projects.

Their worthwhile brochure details the important role sponges play in the Florida Keys ecosystem and highlights transplanting techniques used as part of the restoration process. 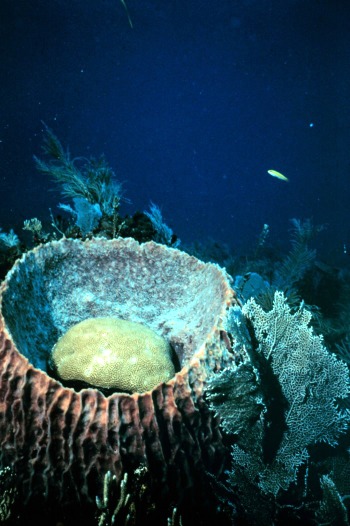 
Like coral, it's been determined that different types of sponges respond well to the cutting method. By removing a portion of the original organism and transplanting it in areas that have a lost or reduced sponge population, conservation organizations can help regenerate growth.

Specific larger varieties are preferred for the transplanting process because they're able to improve water quality more effectively than smaller types of sponges. These preferred species include vase, brown branching, yellow rope and loggerhead.

Another successful marine conservation technique involves rods skewered into the organism then attaching it to a man made solid foundation to hold the sponge in place. The ability to help transplanted organisms reattach is crucial in regenerating growth in adversely affected coral reef areas.