The San Jose Shipwreck or the San Joseph y Las Animum, was originally an English ship built in 1728 and christened Saint Joseph.

When Don Joseph Duque purchased her from the British, he changed her name and she was often referred to as Nao San Jose de Animas, or El Duque.

This 36 gun ship was part of the 1733 Spanish Treasure Fleet that wrecked July 15 along the length of the Florida Coast.

The strong winds and high waves tore at the ships traveling together in the Flota. Struggling to survive, the Captains on the different vessels attempted various strategies.

As the storm progressed, the ships no longer could maintain their Flota formation.

The distance between them began to substantially increase and eventually they were scattered far and wide. The wind and waves continually drove them westward, and as they approached the Florida Keys, their ships smashed onto the sharp coral reefs.

Many foundered and sank, while others were forced over the dangerous reefs and into shallow water where they grounded and flooded.

This 900 ton ship, captained by Cristobal Franco, eventually came to rest off Tavernier Key, on a sandy bottom near Hawk Channel. When the storm passed, the ship was flooded to her poop deck, but fortunately all on board survived. 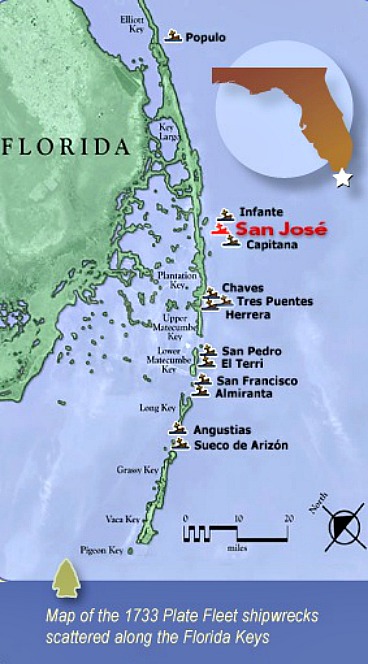 
Her crew began the difficult process of salvaging her cargo. She carried the standard fare of silver coin, bullion, sugar, tobacco, cocoa, Chinese porcelain, indigo and cochineal, but it was not possible to save everything on board.

Compared to other ships that had been forced over the Florida reefs, this ship had grounded in much deeper water. Due to the greater depth, much of her cargo was well below water and was ruined. The important task at hand was to remove as much of her gold and silver as possible.

Her owner, Don Duque, was the Spaniard who had an association with Don Urquijo. The latter was the ill fated owner of the San Ignacio and the San Francisco, two other ships that sank while traveling with the Flota.

Records appear to indicate that he and Don Urquijo had been smuggling extra wealth that was to go unreported to King Philip V. Whether the salvagers recovered as much gold and silver as his manifest declared, or whether they found more, is a point of interest. One of the documents from 1733 to the proper Spanish officials indicate that 236,247 pesos were recovered in a salvage attempt.

At the wreck site they also found a 135 foot long and 40 foot wide ballast pile that reached as high as 6 feet in places. This was a 36 gun ship, and reports indicate that at least 23 cannon were found scattered around the area. Two anchors were also located at the eastern edge of the pile and approximately 200 yards south was the ship's 25 foot long rudder.

Unfortunately, the salvagers who located the San Jose Shipwreck were unable to maintain their claim. The State of Florida eventually won the battle, and the salvagers were forced to return the artifacts to the wreck site. Today, the San Jose Wreck is protected and is on the U.S. National Register of Historic Places.

Scuba diving Florida Keys at this wreck site, you'll find the occasional piece of timber or wooden beam and some of her ballast pile. However, the scuba diving site is becoming less visible with each passing year as time erodes, and sand covers what's left of this Spanish treasure ship.

Even though there's not much left of the San Jose Shipwreck, her site has a rich marine life including a vast assortment of coral and different types of sponges. Sea turtles are encountered on occasion and there are always plenty of vibrant and beautiful tropical fish schooling in the area.


If you're on a Florida Keys diving vacation and choose to explore the San Jose Shipwreck you'll benefit from it's proximity to the El Infante, and even the Capitana.

It's easy to coordinate a day dive trip to these three wrecks from the 1733 Spanish Treasure Fleet. Wreck diving on the Capitana El Rubi Segundo, which was the Flota's magnificent Flagship, would be a nice finish to an already memorable Key Largo diving trip.