Gunvor Is A Florida Keys Fishing, Diving And Spearfishing Magnet

The Norwegian steamship Gunvor is another ship that had one of the more questionable ship accidents in the waters of the Gulf of Mexico.

Built in 1935 she was just over 277 feet in length with a 43 foot beam. These facts are solid and seem to be about the only ones that are. Otherwise, there's considerable discrepancy regarding any of the "facts" that relate to this steamship.

Contradicting opinions or "facts" occur regarding her name, what cargo she was carrying, what date she sank, and even what caused her to sink.

The confusion starts right off with her name, as sometimes she's labeled as the Danish freighter, even though she was Norwegian.

Locals also often refer to her as the Gumba or Gumbor. This is most likely due to the foreign sounding Scandinavian pronunciation, and spelling of her name.

Regarding her cargo, reports have indicated she was carrying cars, tractors and mail.

However, the law suit decided on June 29, 1949 by the United States Court of Appeals Second Circuit in the case of Alcoa Steamship Co. v. United States reveals an interesting twist.

The report indicates that on June 13, 1942, the Gunvor picked up a cargo of lumber at Mobile Alabama and was bound for Trinidad under a government form bill of lading. The law suit goes on to state that on the first day out of the Mobile harbor, she was sunk by enemy action. They declared that both she and her cargo were a total loss. 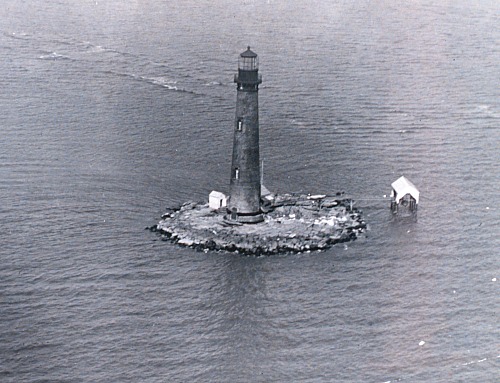 According to the courts, this brief statement solves or at least contradicts the other conflicts surrounding the Gunvor. Was her cargo actually lumber, and not the cars, tractors or mail reported elsewhere?

The situation becomes even more confusing as reports fluctuate between the actual date of the incident.

The most popular report is that the Gunvor sank on June 15, 1942, while en route from Mobile, Alabama to Trinidad. They believe that she passed through an American minefield area and sank.

However, others report that she sank 5 days earlier on June 10, and that the cause was a torpedo from a German U-boat.

The court findings challenge these theories by obviously stating that she left Mobile on June 13, 1942 and sank the following day, June 14th.

The final controversy comes down to what caused her demise. Again the popular theory is that she hit one of the explosives in the minefield as did the Bosiljka, Edward Luckenbach and Sturtevant.

However the other theory is that she was torpedoed. This theory is relevant, as the crew fully believed that is what transpired the night their horror unfolded.

It also rings true with the court case between Alcoa Steamship Company and the United States, where they state she was sunk by enemy action. If she had hit a mine field she would have been sunk by friendly action.

Putting the events surrounding this Florida shipping disaster into perspective is important because this was war time. German U-boats were a major threat to shipping, and Captains were forced to take unusual precautions to keep from being attacked.

A common tactic was to move through water shallow enough that patrol planes could spot the U-boats. This meant she could travel only by day and even though she had a draft of 3 fathoms she moved through the 5 and 7 fathom curves.

What appears to be the case is that Captain Lars Holm Brynildsen decided to shorten the distance by cutting off at Cape Sable and head due south until he picked up the 7 fathom curve north of the Florida Keys. He felt that if he was in deep enough water it would be safe to travel after dark.

Unfortunately we'll never know if his theory was correct or not, because just after sunset an explosion in the port side of the engine room occurred. Two seaman were killed and Captain Brynildsen was injured.

The force of the explosion was so great that within only a few minutes the Gunvor listed to port, and sank taking her cargo with her.

16 crew members made it into the starboard lifeboat, and they were able to recover 4 more shipmates. Even though they believed they'd been attacked by U-boats, they spent over 90 minutes more looking for the remaining crew. Finally when there was no hope that anyone else would be found, they left the scene and rowed 14 hours to Key West FL.

No matter what cargo she carried, or what caused her to sink, the Norwegian steamship does have one commonality she shares with the other vessels such as the Edward Luckenbach. She's become a major hot spot for large game fish, which in turn draws a strong crowd of sportfishing enthusiasts looking to catch a trophy fish when Florida Keys fishing. 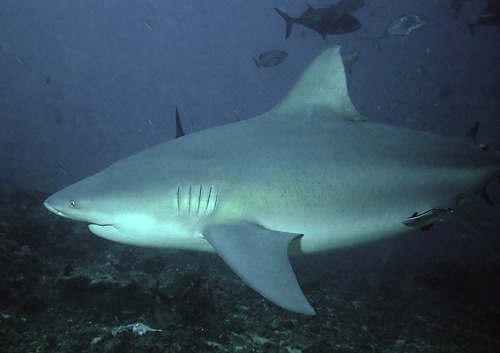 
As challenging as the fishing may be, if you're in Marathon diving and you choose to visit this wreck, you'll find her to be equally demanding. Even though she's an intermediate dive at about 55 feet depth, she presents a number of difficult underwater dangers you need to be aware of.

First, the visibility in the water is usually limited to a short range of about 20 - 30 feet.

She also wasn't a planned wreck, so she has a major number of ship entanglements that divers need to be watchful of. Plus there's the danger that arises from the numerous fishing lines, nets, lures and even anchors that have been left behind after years of Florida sportfishing trips to the wreck.

Then there's the sharks. Large bull sharks like to hang out at this Florida Keys diving site, and with limited visibility you have to be extra cautious as this shark species has a particularly nasty temperament.

Since the water clarity can be poor, you won't have much warning when one of these monster sharks starts cruising towards you. Be sharp, and keep an eye out for these apex predators, and any entanglements that could pose a hazard to you.

Over and above the usual Florida Keys diving experiences that come from interacting with marine life and exploring the remains of a wreck, this site also draws Florida spearfishing enthusiasts.

Since the wreck is not in protected water, and the fish tend to run on the large size, spearing around this Florida wreck has become quite popular. You'll need to remember to use your diver down flag and keep a watchful eye for anyone scuba spearfishing in the area.


If you're in Marathon diving and you choose to visit this intermediate dive site, pay your respects as she's also a grave site for those who didn't make it out alive.