The Spiegel Grove at 510 feet in length, is rivaled only in size by the popular Key West diving site, the USS Vandenburg at 524 feet.

An amphibious warship, the Spiegel Grove (LSD-32) is one of the largest artificial wrecks purposely sunk in the Florida Keys.

She lies near Delta Shoal offshore of Key Largo Florida.

This is because she's capable of challenging and entertaining any level of scuba diving certification.

In fact, even someone who's out snorkeling in Key Largo can visit this popular wreck diving site and enjoy a view of her far below.

Naval History Of The Spiegel Grove

Built as a landing ship dock, she was named after the beautiful Ohio estate owned by President Rutherford B. Hayes.

Commissioned June 8, 1956, she had a 40 foot deep well deck that was 170 feet long and 45 feet wide which carried and launched amphibious assault landing craft. She was capable of reaching speeds of 23 knots and had a troop capacity of 300.

During her military career, the Spiegel Grove served throughout much of the world's theater helping to bring men and materials to governments needing U.S. assistance. Not only did she transport needed military aid, she was involved in covert operations, as well as rescue efforts. 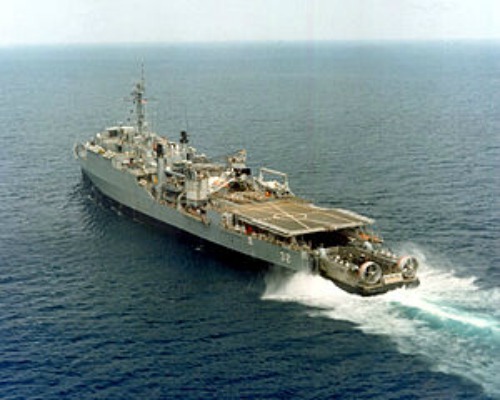 In Her Prime, The USS Spiegel Grove At Sea
www.en.wikipedia.org, US Defense Imagery

However, even illustrious careers must come to an end, and eventually she was retired to the Atlantic Reserve Fleet. On December 13, 1989 she was struck from the Naval Register and custody was transferred to the Maritime Administration.

She laid up for several years in the National Defense Reserve Fleet in Virginia's James River. Then on June 13, 2001 her title was once again transferred, but this time to a non-military institution. She was now property of the State of Florida's Fish and Wildlife Conservation Commission based out of Key Largo.

Sinking Of the USS Spiegel Grove
And Wreck Diving Conditions

On May 17, 2002 her journey prematurely ended, six miles off Key Largo Florida in the Florida Keys National Marine Sanctuary.

What is odd aboutships being prepared for scuttling is that many of them seem to do the job themselves. This means they don't sink where they were intended, or in the expected position.

Instead of shallower water, and the preplanned perfect upright position, her 6 hour premature sinking changed all of man's best intentions. She sank in deeper water, and rolled over, settling upside down with her bow sticking out of the water.

The problem facing everyone involved in the scuttling process was that they were dealing with a behemoth. Righting the Spiegel Grove was tantamount to impossible.

It took 3 weeks before a salvage team was even able to turn her enough so that she finally laid on her starboard side. Efforts continued over time in an attempt to upright her. However, her sheer size and weight, combined with the weight and friction of the deep water, made this goal unattainable.

Man with all of his best efforts and intentions sometimes cannot compete with the strength and magnitude of mother nature's forces. In Florida, hurricanes are a fact of life and rarely if ever are they considered a blessing.

Hurricane Dennis was a particularly destructive hurricane that reeked tremendous havoc and destruction on Florida's Panhandle. However, as it passed through the Florida Keys, it managed to do a good deed.

With 20 foot pounding waves, and Category 3 winds, this strong Florida hurricane lifted this massive vessel, placing her in the perfect upright position. This act of mother nature needs to be put into perspective.

This ship's length is equivalent to 2 football fields stacked end to end. Looking at thise Spiegel Grove dive maps, it will help you comprehend the sheer size of the ship. Understanding her size, this also helps put into perspective the intense velocity and strength of Hurricane Dennis.

In the scuba diving world, wreck diving this ship is in someways comparable to climbing Mount Everest. This is a scuba diving site that requires a minimum of advanced scuba diving certification. Even with these credentials, certain areas of the ship are still recommended as "off limits".

If you're scuba diving Florida Keys and decide to plan a dive trip to this artificial reef, you need to know that diving into the wreck at or below 90 feet is not recommended. It's just too dangerous due to cables, wires and other entanglements that abound.


The Spiegel Grove is also too big to navigate. Quite simply, scuba divers can get lost. In fact, seasoned divers find that 6 or more fairly subsequent wreck diving trips are necessary to just begin to become oriented with the ship's layout.

As the dive map of her deck below indicates, you're dealing with a ship of unimaginable length. She is 510 feet long with an overwhelming 84 foot beam. Even though the water can be exceptionally clear, you absolutely cannot see the whole ship at once. She's simply too large.

Since all ships have obstructions and entanglements, caution is always necessary. However, when you amplify those dangers by the larger dimensions of this ship, it's easy to understand why restrictions are exercised.

The Spiegel Grove also rests at a depth that makes her an entertaining and challenging scuba diving site. This Amazon dive map of her bow gives you a good idea of what you'll experience when you're further down exploring. At a maximum depth of just over 130 feet, her superstructure rises to within 50 feet of the water's surface. Much of her surface rests between 80 and 90 feet.

The following waterproof Amazon dive map of her stern gives you a good feel for this portion of your wreck diving trip. It's odd, because at a glance, a diver wouldn't think that this depth would require such advanced diving certification. However, it's the combination of these many factors that unite to make her an extremely complex and yes, dangerous dive.

Even though she's considered one of the most advanced Florida Keys diving sites, the tremendous clarity of the water makes it possible for less experienced divers and even those snorkeling in Key Largo to visit. Although novice divers need to be reminded that they should not descend to the depths of the ship.

However, since the water is very clear, even those diving or Florida Keys snorkeling the upper levels of the water are usually guaranteed a good "birds-eye" view of the behemoth that lurks below. This also provides good incentive for a scuba diver to log in more dive time and build up credentials.

The scuttling of the Spiegel Grove may have had a somewhat rocky start, but very quickly she's become a hot spot for Florida marine life. Over 130 species of game fish and tropical fish have taken up residence within the protection of her structure and immediate area.

Coral has become plentiful and varied, and projections expect that fairly soon, her shell will become totally encrusted with these living wonders of nature.

Perhaps it's her overwhelming size that attracts fish to her. It may also be her vast number of crevices, nooks and crannies that entice them. Whatever the reason, you'll discover that the marine life is second to none at one of the world's largest, most successful artificial reefs.

Wreck Name
USS Spiegel Grove - Landing ship dock - 510'
Location
6 miles off Key Largo near Delta Shoal
GPS Coordinates
25 04.003N 80 18.656W
Markers
Moorings are tied to the boat itself so divers can navigate directly to the massive ship's hull
Level
Advanced
Depth
60' - 130', with most of the ship between 80' - 90'
Visibility
130'+
Dive Site Description
If you're Key Largo diving, choosing this scuba diving site as part of your dive vacation gives you a chance to visit the largest artificial reef in the Florida Keys. Sitting keel up, the ship is in excellent condition, and serves as the basis for the artificial reef system. The ship's massive size is almost unfathomable, and requires a number of diving trips to become familiar with her
Marine Life
Over 130 species of fish including game and tropical. Large goliath groupers are seen hiding out in her holes, barracuda, snapper, shark, gobies, grouper, rays, ocean sponges, algae, and a large variety of coral


When diving Key Largo, a visit to the Spiegel Grove is somewhat like exploring an underwater city. Her mass is so substantial that it's impossible to visualize her all at once.

Without question she's one of the greatest artificial reefs the Florida Keys possesses, and she's worth every dive trip you're able to make out to her.