Over the decades, the HMS Winchester has turned up a number of interesting pieces of treasure.

Some people also believe that many valuable artifacts are still buried beneath the sand, coral and grasses that surround her bones.

As a British man-of-war, she carried a large crew, and a variety of staples.

Even though centuries have passed since her sinking, there's still the thrill of possibility.

The chance that something from a powerful era may be uncovered by you whether you're wreck diving or Florida Keys snorkeling this popular Key Largo dive site.

Only 2 short years after her maiden voyage, this ship was traveling from Jamaica to England. The crew on board, including the Captain became very ill. Captain Bibb was taken off the ship in Jamaica, and command was passed on to Captain Soule.

Departing Port Royal, the crew continued to succumb to the spreading illness, until only 8 were left to sail the ship.

It's uncertain what sealed her fate. Perhaps it was the lack of capable crew members. It may have just been normal bad luck. But no matter the cause, on September 24, 1695 this large man o' war foundered on a Florida Keys coral reef.

Eventually the Captain and remaining few crew members were rescued by another ship, but even he died shortly after. In total, close to 400 crew were lost due to the illness. 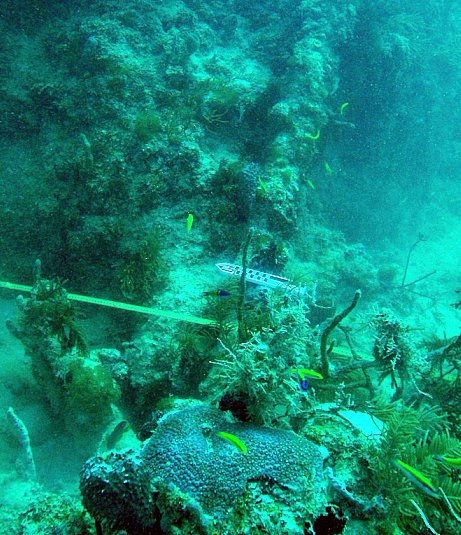 
243 years later, in 1938, the remains of this man o' war were discovered when Florida fisherman spotted a cannon. She was resting in about 28 feet of water, southeast of Carysfort Light.

To help determine the ships identity, Charles Brookfield was contacted. He then coordinated a recovery effort which salvaged some important finds, including silver coins, musket balls, cannon, her anchors, and a prayer book.

Even though the recovery was successful, they had not been able to confirm the ship's name. For a ship this old and decayed, markings of any kind are critical in making a proper determination.

Cannons are often engraved, and through the ones recovered at this wreck site, Brookfield was able to trace her identity. He forwarded a likeness he'd drawn of the markings to Britain. In turn, the British examined their records and reported back that this was the HMS Winchester.

During the salvage rush of the early 1950's and 1960's, other divers combed the wreck site and discovered an additional number of artifacts. Many of the finds were typical of what would be found on a ship of this era, however more impressive treasures including a gold watch were also recovered.


The thrill of Florida Keys diving is the unknown. What will you see in terms of marine life? What will you find? Here at this shallow wreck diving site, there's always the chance you'll discover something hidden from the past.

Perhaps you'll find bone remnants from the sailors who died. What happened to them on this sea voyage? Were their bodies thrown overboard once they perished? Or perhaps their bodies were still on board when this proud man o' war foundered and sank.

Once you're satisfied that you've not discovered any bones or interesting remnants from the past, plan on more Key Largo diving by exploring the rest of Carysfort Reefs.

If you have scuba diving certification of intermediate or better, you'll also want to head over to Carysfort Trench where you can dive deeper, encountering an even greater variety of Florida marine life.