Great White Heron Plumage Was
A Favorite Headdress For Women

The great snowy egret is often, but incorrectly referred to as the great white heron.

These birds are not one and the same at all. In fact there is still controversy today over whether the latter is a morphed color version of the great blue, a separate species, or a sub-species.

The sub-species theory seems to hold the strongest case as there are not enough differences between the white and the great blue to warrant a separate species category.

There are however enough differences to maintain the theory that there is more to their differentiation than simply morphed color.

The following preview of illustrations, prints and literature depict these birds and their counterpart, the great blue heron. Interesting to study, they are also worthwhile and attractive to own as part of a collection.

Available through Amazon, you can look through the following previews, or use the handy search box below them to look for other items that interest you.

This species of heron is slightly larger than the blue heron. It's bill is larger, yet it's plumes are somewhat shorter. The two wild birds also have different nesting habits with white herons preferring to nest and inhabit areas that have mangroves.

This species of wild bird is also very large and majestic. The males weigh about 10 pounds and have a wing span of approximately 83 inches. They measure about 70 inches in height from the top of the head to the tip of the claws.

The white heron bird is also typically seen either roosting on one leg in mangrove trees, or feeding in tidal flats at dawn and dusk.

Their diet primarily consists of fish, amphibians and crustaceans and they catch their prey by stalking and silently waiting, before swiftly striking with their long beaks. 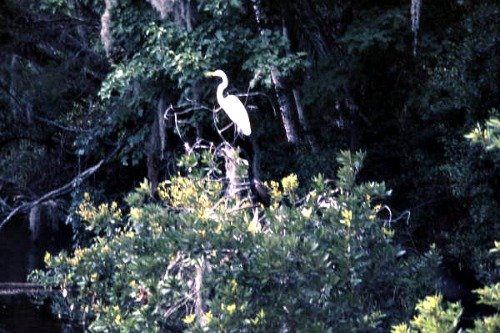 
Another characteristic of these Florida wild birds is that they're rather shy and quiet, except when startled. They will quickly take off in flight making loud croaking sounds as they fly away from perceived danger.

The species is extremely cautious of it's surroundings and when it senses approach, they will hurriedly take flight. They've been witnessed repeatedly circling a landing spot to determine the safety of an area. So wary are they, that they typically roost in a different tree every night.

Unlike roseate spoonbills, ibis and other gregarious bird species, the great white heron prefers to stay with it's own bird type. They also have a tendency to show aggressive, even lethal behavior towards other bird species, including the great blue heron.

In fact, their pronounced aggressiveness was documented by John James Audubon when he was first introduced to this bird species. After he spent time drawing and studying this majestic bird, he then brought a number of captured ones on a journey, giving them to several friends.

In his recounting of these younger birds, he mentioned that they attacked and killed some of the great blue herons that had been captured and brought along.

They also attacked and killed some of his friend's domestic ducks and chickens. In fact, the white herons behavior was so aggressive, they eventually killed his friend's cat, and then began to chase after the man's children.

The heron nests are typically built a few feet above the high tide mark and are made of heavy twigs.

Flat and substantial in size, the nests average about 3 feet in diameter. Throughout April, this species of heron begins to lay blue green eggs and usually there are three eggs to a nest.

Both parents are dutiful in their nest sitting responsibilities and about 30 days after the eggs are laid, the young chicks begin to appear.

Most species of white birds do not start out this color. This species however is different, and the white heron chicks are white to pale creamy white in color from the moment they hatch.


It was this wild bird species spectacular plumage that nearly caused their extinction. During the late 1800's and early 1900's, hat makers sought out the pure white feathers which were in high demand by the ladies of that era.

Catching and killing these birds was a difficult challenge since they're naturally wary, and difficult to approach. However, buckshot proved to be an effective killing mechanism when used against them while in flight.

To curb the slaughter and end the ultimate decimation and extinction of this bird species, the Great White Heron National Wildlife Refuge was formed. Today, these birds have made a dramatic rebound as they, and countless other bird species enjoy the protection the national wildlife preserve provides.