It's administered by the National Key Deer Refuge and access to the GWHNWR is by boat only.

The Great White Heron Visitor Center on Big Pine Key is located a few blocks north of the traffic light on US Highway 1 at Mile Marker 30, and is at 179 Key Deer Blvd. in the Big Pine Key Shopping Plaza.

Formed in 1938, the Great White Heron National Wildlife Refuge is one of the oldest wildlife sanctuaries in the nation and is comprised predominantly of backcountry water.

It covers 300 square miles of water and islands which equates to about 200,000 acres of open water and 7,600 acres of land. The islands within this Florida Keys National Wildlife Refuge are located in Florida Bay and the Gulf of Mexico.

The smaller backcountry islands are predominantly covered by mangrove. The few larger islands in the area are primarily covered by tropical hardwood hammocks and then trimmed out with mangroves. 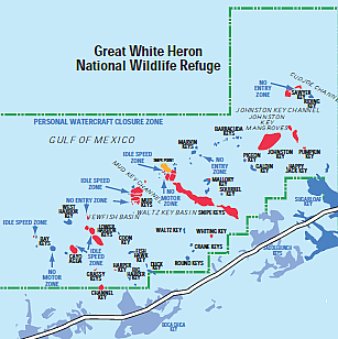 Other than the great white heron this is named for, this area is dedicated to reestablishing a habitat for 250 species of protected birds.

The area also is a critical habitat for several endangered sea turtles. Both the green sea turtle and the loggerhead sea turtle nest on the few sandy beaches the islands offer. Plus the hawksbill sea turtle feeds on the grasses that thrive in the shallow waters off these Lower Keys.

The sanctuary is also the perfect feeding environment for wading birds. There are numerous patch reefs and sand flats that make up a large portion of this wildlife refuge.

The surrounding water also serves as a cushion to the region and protects the islands from the rest of the Florida Keys. This means that dangerous Florida wildlife found on the bigger islands, such as raccoon have no access to the islands within this wildlife refuge.

This cushion has had a tremendous positive impact on the population regrowth of numerous bird species since raccoon are notoriously major predators of bird nests. 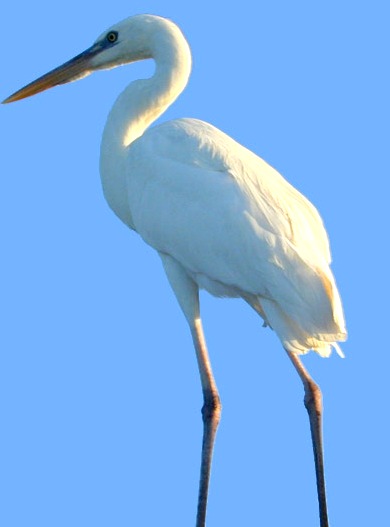 
Birds that hold particularly concerned and wildlife protection status are the great white heron, the bald eagle, the reddish egret, the white crowned pigeon, and the piping plover.

One of the Refuge's ongoing projects is to monitor the population of all birds and sea turtles in the area. Nest counts and visual identification helps document the increase or decline in the different endangered species.

Fortunately, since the area is accessible only by boat, and all inhabitants of the area are protected, the numbers for the critical and non-critical species are steadily rising.

Another important project that is continually in progress is the control of invasive plants. The invasive plant species that fall into this invasive category tend to overgrow and kill the native vegetation.

Also, the invasive plants are not able to provide the right habitat or food source for the native Florida wildlife. By controlling and eliminating the non-native plants, both the flora and fauna have begun to thrive.


For anyone planning on traveling out to this wildlife refuge by boat, the area is open to fishing but hunting is prohibited. Also, most of the islands within the Great White Heron National Wildlife Refuge are closed to public access.

These are important wildlife conservation measures as the islands are small, and any human disturbance can have serious negative impact.

There are a few areas within this sanctuary that allow limited access, but they're restricted to day use only. To determine which areas are open to the public, you'll need to check with Refuge Headquarters at 305-872-0774.