Crocodile Lake National Wildlife Refuge (CLNWR) is the first wildlife sanctuary you'll come to at the north end of the Florida Keys.

When you enter Key Largo on US Highway 1 you'll intersect with County Road 905 aka Card Sound Road.

There is no entrance fee since this Florida Keys Refuge is closed to the public. However the adjacent Butterfly Garden is open and is free of charge. 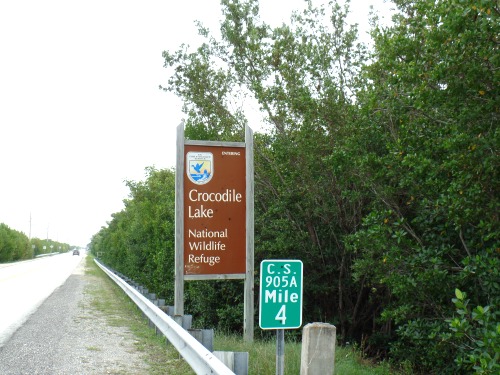 Crocodile Lake is made up of three different habitats. The upland hammock area covers about 1,805 acres, the mangrove forests along the shorelines cover about 4,213 acres, and there are about 668 acres of open water.

The tropical hardwood hammocks are vital for the protection and survival of numerous butterflies, tree snails, native and numerous migratory birds, reptiles, and mammals.

With the Florida Keys being heavily overdeveloped, the Florida wildlife have physically run out of "living room". Crocodile Lake provides a crucial haven for their survival. 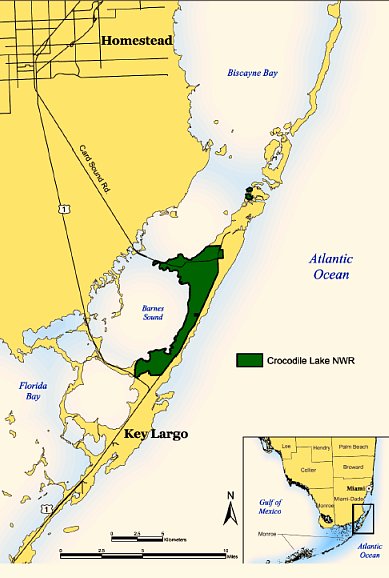 The Crocodile Lake National Wildlife Refuge was formed in 1980. This sanctuary is also different from most other preserves because it's not in natural condition. This is due to the fact that this refuge was once destined to be a major housing complex.

This failed Florida Keys project has proved to be somewhat of a bonus, as the area was dredged for canals to provide boat access to the Atlantic Ocean.

The dredging produced large mounds or berms along the canal banks, and these berms have become extremely popular with the American crocodile as part of their nesting area.

Part of the Refuge management's responsibility is to maintain the berms and keep them free of ferns and other damaging plants such as the invasive species, kudzu. In doing so, the vegetation is replaced with peat, a material the crocodiles highly favor for nesting. 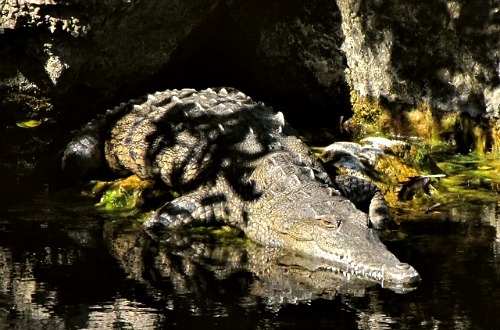 American Crocodile At The Refuge
www.byways.org


Not only do crocodile favor the man made berms, they also nest along the shorelines in the mangrove forests. Their breeding season is from March - October each year.

Another aspect that makes the Crocodile Lake Refuge different from many other protected areas, is that it's completely cordoned off from the general public.

This is because a number of extremely endangered species inhabit the region who also happen to be susceptible to loud noises. Plus, this is a relatively small sanctuary. This means any ratio of humans to land will have a greater negative impact than it would have in a larger sanctuary.

Any human presence is especially damaging during crocodile breeding season. Any sort of a disturbance will cause a female crocodile to completely abandon the nest, leaving the crocodile eggs vulnerable to the elements and to attack from predators.

One area of the Refuge that is open to the public is the beautiful Butterfly Garden and this is adjacent to the entrance. This garden gives visitors an opportunity to stretch their legs and enjoy a more natural Florida. At the garden an educational and interpretative area explains the importance of the Refuge and details some of the endangered species that live here.

This Refuge is more than just a critical habitat and breeding ground for the American crocodile.

One of the other endangered animals that is of prime importance is the Key Largo woodrat. It faces rapidly decreasing numbers in the Everglades due to heavy python predation.

A breeding program for the Key Largo wood rat is now underway, with the intent of eventually being able to release them back into the wild. 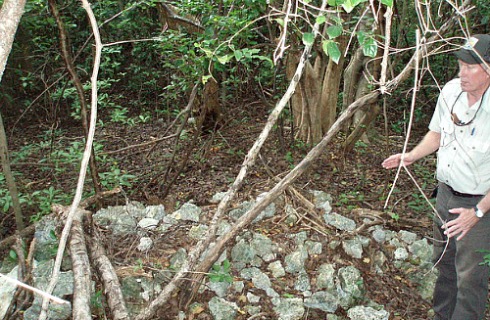 
Other threatened species include the Eastern Indigo snake, Key Largo cotton mouse, Stock Island tree snail, and the Schaus swallowtail butterfly which is in season from April - July.

Plans are being considered and evaluated to help make this area somewhat accessible to the general public without incurring a negative impact on the protected endangered species within it's boundaries.