American Crocodile Facts And
How They Compare To Alligators

The American crocodile is approximately a 100 million year old reptile.

They are also an endangered species but fortunately their numbers have begun to rebound.

In early July, 2012 the Fish and Wildlife commission announced that they were looking to hire 2 people to fill a new position.

Duties involved 'wrangling' crocodiles that had moved out of their territory. The commission was forced to add these job positions as a direct result of the crocs population surge. They are now 5 times greater in number than they were 30 years ago!

As with alligators it's illegal to feed crocs or even to dispose of fish waste into the water around marinas where they may be living.

Fish guts and heads are highly attractive drawing cards bringing them close in where people are. This proximity to man, and a reliable food supply of fish waste, teaches them to loose their fear of mankind.

The one thing humans never want to be associated with is food, because to the reptile there's no differentiating - we simply become the food. 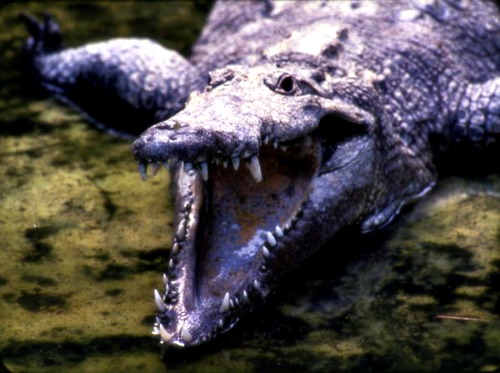 
Where Do Crocodiles Live?

The American alligator, has a territory covering a large portion of the southern and also eastern United States. In contrast, crocs are confined to the southern regions of Florida because they're unable to handle colder weather.

The American crocodile typically lives off the coastal regions of the Florida Keys, and are seen in mangrove areas, around marinas, at river mouths, occasionally in freshwater, and even in the ocean. This means their range extends along Florida's east coastline from Miami into Biscayne Bay and south, then along the west side of the Keys reaching into Florida Bay and the Everglades.

Unlike alligators that tend to gather in larger groups, these large reptiles live solitary lives. This means it's more difficult to spot one, because they're not "en masse". However, even with their solitary nature, the number of interactions between them and us is on the rise.

To get even more information about these large, aggressive reptiles, you can get any of these books from Amazon that go into greater specifics as to nature, appearance, habitat and so forth.


What Do Crocodiles Look Like
And How Do They Hunt?

The most distinguishing features between crocs and alligators are their teeth. Crocs protrude from the bottom upward, even when their mouths are closed. Alligator teeth protrude down from the top. American crocodiles have much longer, thinner snouts while alligators snouts are rounder and broader.

Crocs are also lighter in color ranging from olive-brown to gray-brown and have a dull yellowish coloring around their jaw. Their bodies may or may not have dark band markings on them.

In Florida they average about 13 feet in length, which makes them smaller than other crocodiles found elsewhere in the world. This also makes them about the size of a medium length alligator.


Compared to the crocs in Africa and elsewhere, the American crocodile is not likely to attack humans. They also have no natural enemies and even though their diet is composed predominantly of fish, they'll eat most anything.

Even though their mouths are perfectly designed for catching and swallowing fish whole, they will, as the movies depict, wait at the water's edge to snap up any prey. If the prey is a larger mammal, they'll wrestle it into the water and drown it.

Once dead, the croc then twists it;s dinner over and around it's body, churning and frothing up the water until it's successfully removed a large chunk or limb which it then swallows. If it's unable to remove a piece of flesh, or if it's eaten it's fill, it then pulls the carcass below the water and buries it in it's cave or beneath a rock or tree limb where it's stored til the next meal is needed.

Lethal hunters, with only their eyes visible above water, they'll survey their intended prey at the edge of a bank. Then without even a ripple, they silently move within reach and in one life extinguishing rush, they grip and kill their victim. Likewise, if they're on land and spot a tasty treat near the water's edge, they'll slowly slink back into the water and silently slither towards their intended target. 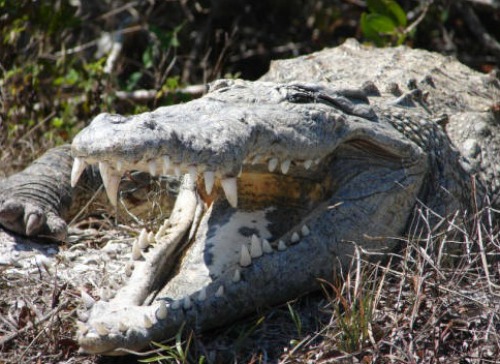 
American crocodiles normally hunt on moonless nights, but they've been seen hunting at all times of day and night. This mean they're opportunistic. They don't particularly care when they eat, or what. If something is foolish enough to be within reach, they'll take advantage of it. This is why humans need to exercise caution when in areas that could contain one of these ancient reptiles.

Like the alligator, they also make dens or burrows which help to keep them warm in the winter. These burrows can be quite large, and they'll often dig 10 - 30 feet into a bank to make their hiding spot.

Their burrows not only keep them warm, they serve as a good hiding spot for extra food that hasn't been consumed or still needs time to "ripen and cure".

The American crocodile is territorial, and this comes from being solitary. This means that they are likely to be more dangerous. There have been no reports of humans attacked in Florida, but this doesn't mean that will always be the case.

As their numbers increase, and humans encroach more into their environments, encounters are likely to occur that are not so pleasant. Timid yet fierce, they will protect and defend their territory, their nests and young, and themselves to the death.

There are interesting similarities in the breeding and nesting habits of alligators and crocodiles. Crocs however do mate earlier than alligators, with their season being late fall into early winter. The males bellowing calls bring in the females, who reach reproductive age once they attain a length of about 5 feet.

Once they've mated, the females dig out their nests along the banks of the water, and like our American alligators, they protect the nest with coverings which hide the eggs from predators and maintain the correct internal temperature of the nest. Temperature allows the upward of 70 eggs to incubate and grow. Temperature also determines the sex of the hatchlings. 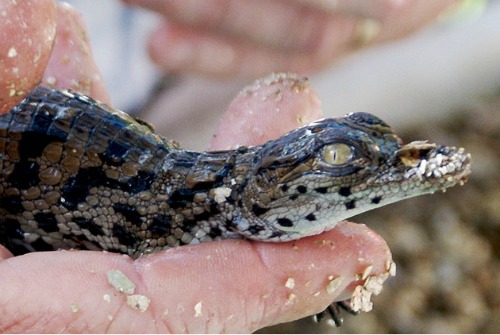 
Like alligators, the mother crocs help with the "birthing" process. As they eggs begin to break open, the baby crocodiles emit grunting sounds. This draws the mother to them and she helps with the uncovering of the nest. She also helps open any eggs that haven't begun to crack. She also carries the babies in her mouth to the water so they can get into their natural environment and she stays with them and protects them until they're about 5 weeks old.

This early abandonment is one of the biggest differences between crocs and alligators. Even at an early age crocs are solitary, while alligators stay with their mother until the next year's breeding season.


The American crocodile is relatively easy to identify once you know what to look for. Since they're relatively rare, if you do happen to see one, make sure you snap a picture and have your binoculars handy. You'll want to get a good close up - from a distance.