In January, 1889, while en route to Savannah, Georgia she grounded at a reef called Porkfish which is a northern section of the Coffins Patch Reef cluster.

Fortunately no one was killed in the ship accident, and her crew along with local salvagers, were able to rescue a portion of the lumber she carried on board.

Located about 4 miles SSE of Duck Key, this Florida Keys shipwreck is easily recognizable as it's marked by a spar buoy.

She also sits relatively shallow at only 20 feet of water, and with typically good visibility, this makes this an excellent Florida Keys snorkeling spot.

Anyone diving Marathon Florida will also enjoy exploring the unusual spread of her debris field and the reef she rests upon. You can also expect to capture some interesting underwater photography shots of the beautiful coral and marine life in the area. 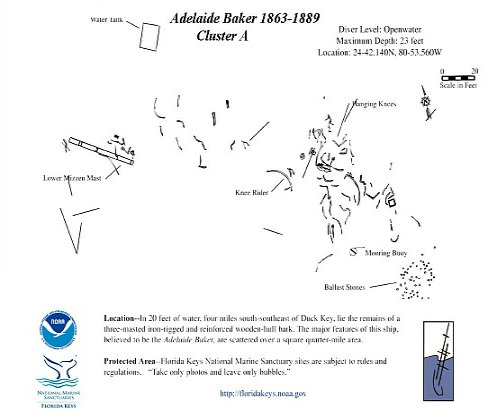 
When Florida Keys diving in the Marathon area, you'll also discover that this wreck site is broken down into two areas with a debris field running NNW for about 1400 feet. The first section is where the ship accident occurred and where she eventually sank.

The other debris field is believed to be a result of the work of salvagers. In searching through the remains of the wreck, they removed material from the original location and relocated the pieces to this separate debris field.

At the primary wreck site is where her granite ballast is concentrated because this is where she first grounded on the reef and spilled open. Scattered around this Florida Keys scuba site you'll find wood and iron frames used in her construction, along with a section of her mizzen mast and a metal water tank. 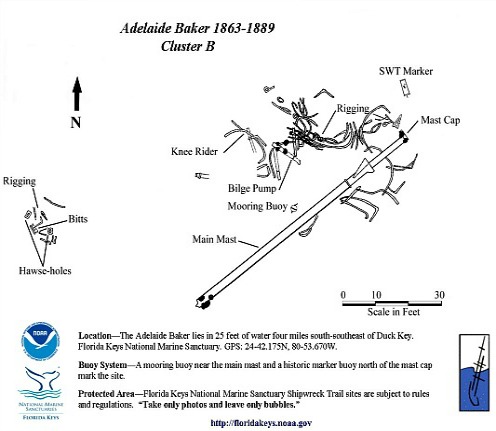 At the secondary site, her 77 foot iron mast and rigging is found, along with her bilge pump, tackle, pieces of iron frame, hawse holes where her anchor ropes passed, and another water tank nearby.


When snorkeling or scuba diving Florida Keys in the Marathon area, the Adelaide Baker is a great choice for a dive trip due to the colorful reefs and interesting nearby wrecks.

Situated at the north end of Coffins Patch with it's cluster of 6 reefs, this is a less trafficked area. The San Ignacio, which was part of the ill fated 1733 Spanish Treasure Fleet is also nearby.

Between the different wreck features, numerous reefs, and abundant marine life, anyone Florida Keys snorkeling as well as novice divers will find this a good addition to their Florida Keys scuba vacation.