Key West Fantasy Fest masquerade balls wouldn't be what they are, without great sexy masquerade costumes.

Seeing is believing and so the following Fantasy Fest photos will help get you into the spirit that rocks Old Town Key West for 10 wild and crazy days every October.

You'll also need to plan ahead and make sure you have appropriate festival and masquerade ball costumes for the best Key West events you'll want to attend.

Togas for men and women are just some of the fun and popular masquerade costumes found in our sexy costume store. Plus you'll certainly want to have at least one or two costumes to wear to a ball and other Key West parties you'll attend.

Amazon has a lot of costumes you can choose from and I've included some examples here for you. As an Amazon Associate I earn from qualifying purchases. If you click a link to that product/service, or something else you like, and buy it, I stand to earn a small commission. The item does not cost you any more. This is called being an "affiliate."

Each day is filled with a variety of ribald activities planned out as part of the Fantasy Fest Schedule of Events. Kicking off the 10 day extravaganza each year is Goombay in Bahama Village.

The rich Bahamian culture blended with it's African ancestral background has a strong influence in Key West FL. Therefore, it's only fitting that Goombay, named after the Africa goatskin drums played by junkanoo bands, be the official start to the Key West Fantasy Fest.

Goombay starts on Friday, and goes to midnight on Saturday. Junkanoo bands, including local groups such as Key West Island Junkanoos and invited Bahamian groups, play their junkanoo music.

The music is addictive, and you can't help but dance. The air is filled with the spicy aroma of good Caribbean BBQ and other tantalizing food, adding to the intoxicating effect. 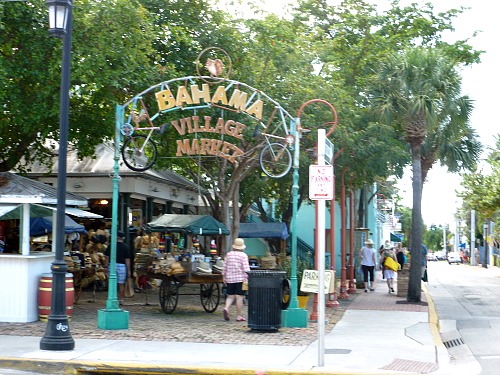 Bahama Village is the Kick off For Fantasy Fest Key West


Amidst all the noise and amazing smells, people dance, party, and sell their wares. If you love to shop, Goombay has all kinds of treasures to buy as gifts or mementos. African masks, statutes, just about anything you can imagine are piled high and deep on the tables scattered throughout Bahama Village.

This is one of the most spectacular street events around, and it's also free. Goombay, is held at the corner of Duval St and Petronia every year and is one of the few family oriented events occurring during the Key West Fantasy Fest. 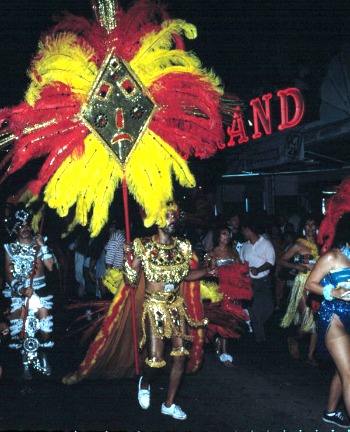 Of all the Fantasy Fest masquerade balls, the Coronation Ball is the most elegant. Also starting the first Friday evening, this is the official crowning of the new Conch King and Queen. This exciting, and important annual event is open to anyone who has been a resident of Monroe County for at least one year.

Typically the competition for King and Queen has been in the works for several months, often beginning as early as August. The hopeful Kings and Queens have worked hard during this time to set up strong fund raising networks.

Their primary goal is to raise the most funds for various AIDS awareness programs. A worthy cause strongly favored by Key West FL residents and promoters of Fantasy Fest alike.

The Coronation Ball is the first of the masquerade balls. This is when the most successful fund raisers are declared King and Queen, or Queen-in-drag.

The newly anointed King and Queen are honored with royal scepters, robes and crowns and their sovereign reign begins over the festival. 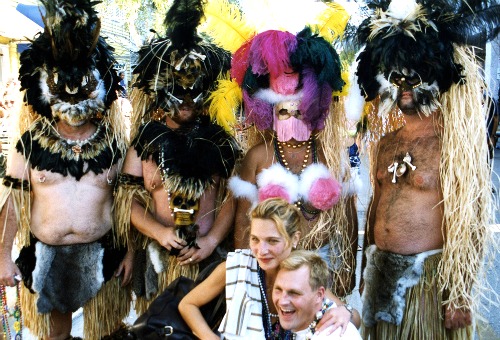 However, there's so much going on that even the most seasoned party-goer will find it difficult, if not impossible to keep up. After a while, and a few drinks, it becomes one big blurred Key West party with the festivities spilling over into the streets. 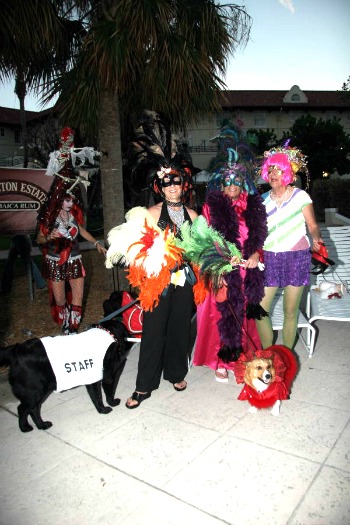 Even though there are different themes for the various masquerade balls and parties held each day, some are traditional staples. The annual Fantasy Fest Pet Masquerade and Ball is one of the all time best events, and it's proceeds go to a local animal shelter.

The key is to match yourself to your pet, or vice versa, and it's fun seeing how successful people actually can be. The Pet Masquerade and Ball is free to anyone attending, with an entry charge for those participating. 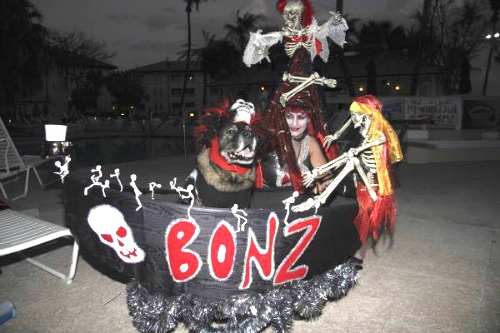 
The "Pinking of You" Decorated Bra Auction is another worthwhile event, with proceeds going to a breast cancer awareness charity. Anyone, from drag queens to local residents can get involved and model the handcrafted brassieres which are auctioned to the highest bidder.

These prized decorated bras are mastered into true forms of art. Successful bidders often wear the brassieres during the remainder of the week, or give them as unique, if not weird gifts. 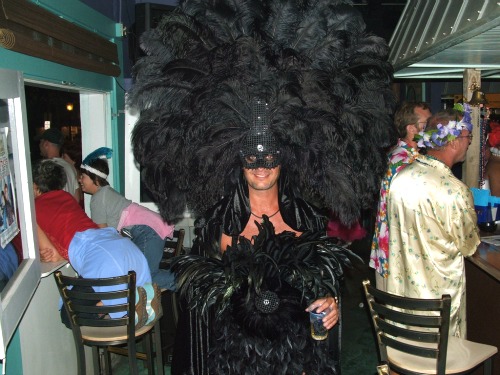 One of the more popular masquerade balls is the long standing annual Fantasy Fest Headdress Ball. Entrants are encouraged to create lavish, outlandish headdresses, often with an adult theme. The degree of difficulty in not only creating these masterpieces is apparent, but so is the wearing of them.

The headdresses with the rest of the participant's ensemble make the Headdress Ball one of the most creative and elaborate of the planned events.

I've included some fun headdresses and masks available through Amazon for you to browse through. As an Amazon Associate I earn from qualifying purchases. If you click a link to that product/service or another one you like, and buy it, I stand to earn a small commission. The item does not cost you any more. This is called being an "affiliate."

A free and popular event is the Fantasy Fest Masquerade March, which starts out at the rather funky yet historical Key West cemetery. This is the gathering point for those participating in the march that has many watering holes along the way. 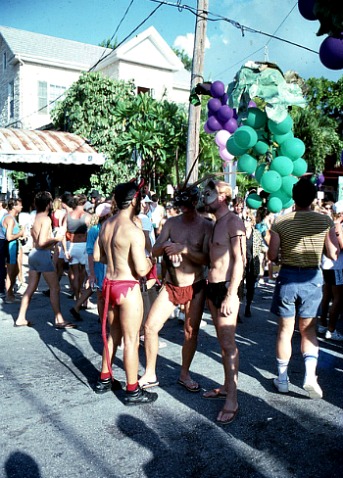 
Participants of all shapes, and sizes enter the walk. Their pets are also a big part of the procession and are often dressed or body painted to match their owners. 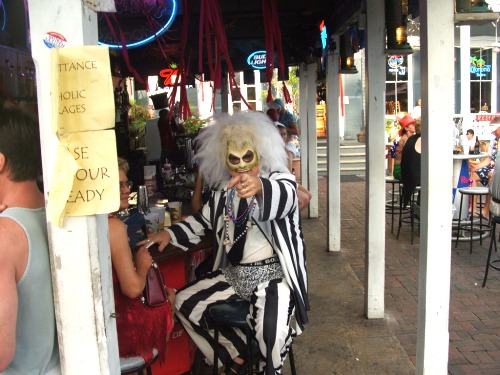 
It's not so much an orderly march, as more of a communal throng drunkenly jostling from one place to another. People stop while others join in. Pit stops are made to pick up the drinks that are handed out and then happily consumed. Loud conversation, noise makers and blaring music fill the air. It's a Fantasy Fest party that has taken to the streets in a large, barely organized fashion.

Technically anyone considered an adult seems to be in the march, in or out of costume. Every age group, sexual orientation, body size, and shape imaginable is here. 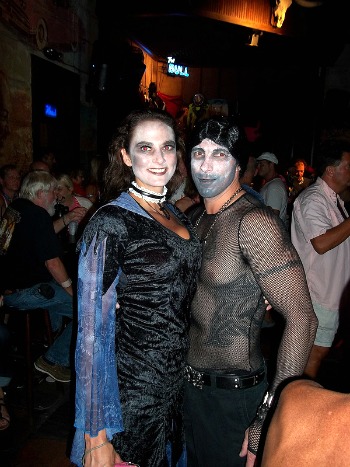 Bud Light Fantasy Fest Parade is the crowning glory to the last Saturday's activities. Bands play, and scores of wildly and extravagantly decorated floats participate in this hugely anticipated event as it travels down Duval Street. 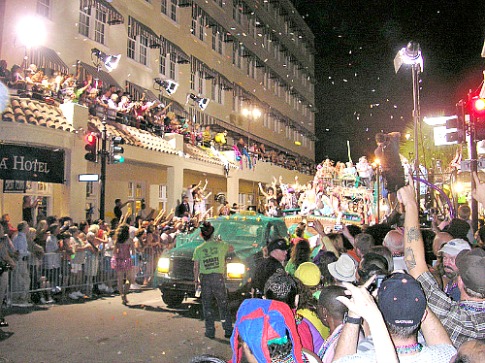 Floats and Revelers Make Up the Fantasy Fest Parade
www.en.wikipedia.org


Not only is the parade the culmination of this incredible annual event, it's your last chance to really go wild and show off your best festival costume! Plan ahead, get the best costumes in advance so you have what you need. Then organize your festival costumes so you have the right attire for the different events you'll attend, making sure you'll WOW wherever you go!


VIEW ALL 'HIS AND HERS' FESTIVAL COSTUMES!

GET YOUR SEXY COSTUMES NOW!

Sunday is sort of a cool down day, as it's the last day of the Key West festival and it's typically considered Children's Day. A host of family events including games, crafts and food are usually planned at Bayview Park at Truman and Eisenhower. Of course in keeping with the Fantasy Fest theme a costume contest for the kids is also part of the day's activities.

As we all know, nothing's over until the fat lady sings. So in keeping with true festival humor, the final hurrah is The Fat Lady Sings Tea Dance. Located at 1125 Duval Street, in the beautiful La Te Da Hotel this last Key West event runs from 4:00 - 8:00. This party recap is filled with good music, great food and final, often tearful goodbyes.

Returning to a world of normal after leaving the wildly whacky world of masquerade balls can be hard. Saying goodbye to Key West Florida, and friends old and new is even harder. Of course dealing with the latest set of hazy, perhaps embarrassing memories may be the hardest of them all.