Waterspouts are a regularly occurring phenomenon of the Florida Keys climate.

On average, about 500 "water tornadoes" occur in a year in the Atlantic and the Gulf of Mexico waters.

They primarily develop in the summer months when humidity builds and storms begin to brew.

They are also not so easy to spot - at least when you're in close proximity to one.

This is the primary reason why this type of storm funnel can be dangerous to anyone out on the water and is why it's important to monitor the weather and take necessary precautions quickly.

Even though they're similar in appearance to a tornado, they are more of a cousin as opposed to being a water tornado. The reason is they develop out of smaller, lower forming cloud systems averaging about 20,000 feet up.

This is opposed to the towering, heavy thunder heads that build in the upper stratosphere and benefit from stronger air currents which help to form deadly land tornadoes. 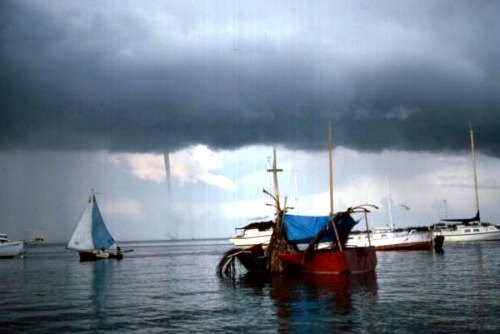 Waterspouts Like This One At Key West Are Common Off The Florida Keys
Florida State Archives, Florida Memory, Dale M. McDonald Collection


They also don't carry the punch of the larger land tornadoes. This means they don't have the destructive speed, duration or swath that you would associate with one on land. Most average below 50 mph, move across water for about 15 minutes and have relatively small swaths averaging anywhere from about 10 - 90 feet.

In comparison, a land tornado can have a mile wide swath with speeds exceeding 300 mph. They will often be on the ground for an hour or more, leaving a path of deadly destruction in their wake.

These forces of nature form from flat, dark bottomed clouds which indicate rain is imminent. The hot humid air causes the moisture from the water to rise and condense into small droplets. The vapor continues to condense, and as it does, it releases more heat. The air continues to rise faster and these air currents form the rotating motion that becomes the waterspout.

Since these formations are not as large as their cousins on land, they usually dissipate relatively quickly. The moisture falling out of the cloud acts as a cooling agent to the vapor being sucked up to it, and this causes the funnel to break apart.

The problem with this phenomena is several. First, anyone on water will often not be able to see one is forming until it's actually developed. You may see what appears to be the beginning of a funnel partially descending from a cloud, but it's contact with the water's surface is not usually visible from the ground.

At this stage, the contact with the ocean's surface is often only visible from the air. It's not until the rotating action has gotten stronger, and the sea is kicking up, that boaters are even aware that one is in the vicinity. 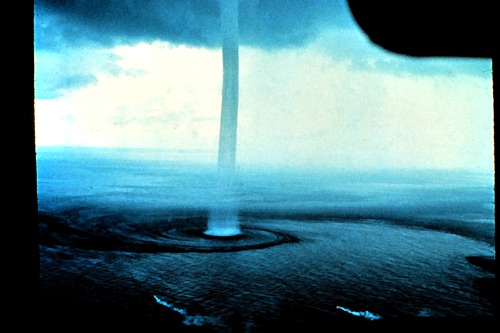 Waterspout Seen From The Air
www.photolib.noaa.gov


The other problem with these funnels is that they form off relatively small systems. This makes it's extremely difficult for meteorologists to give advance warning. With this being the case, any one planning on being on the water in the summer months, needs to take extra precautions because Florida Keys weather can be unpredictable at best.

Waterspout facts to be aware of and what to watch for:

1. They typically form between 4 p.m. and 7 p.m. when storm activity will be at it's strongest

2. Between 11 a.m. and 1 p.m they can form, but this occurs less frequently than later afternoon developments

3. Watch for lines of lower flat clouds with dark bottoms forming - especially if a light rain is developing

4. Keep an eye out for any kind of funnel shape that is beginning to descend from, or off to the side of, a cloud. It may already be touching the surface and you simply can't see it yet

5. Watch for bubbles and small waves on the ocean surface that appear to be coming from nowhere. This indicates one is moving across water. If it's coming towards you get out of the way immediately

6. Keep a constant watchful eye out for one. Chances are, if you spot one, others will be forming as they often develop in clusters

7. If you're swimming or Florida Keys diving, it's not advisable to move into the funnel area. Just as with anyone in a boat, damage can occur to you because it's not been determined how deep the funnel actually descends below the surface. It may or not be possible for the funnel to actually rip someone out from below the ocean's surface - so play it safe and stay out of it's way. 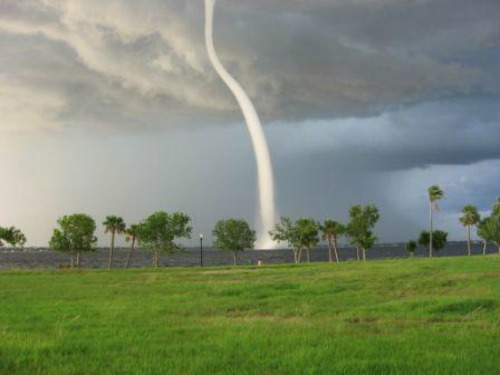 Fortunately they're not as dangerous as land tornadoes, however they're a force of nature you still don't want to mess with. They'll hurt you, and can cause considerable damage to your boat, even capsizing it if they're strong enough.

Some of these formations have topped over 200 mph so you never know what to expect when you see one moving towards you. Knowing this, play it safe, and get out of the way. Keep a wary eye to the sky as you watch for more, and head to shore as quickly as you can.

Joseph Golden, an expert on the subject believes that a number of the Bermuda Triangle incidents are related to waterspout activity. Knowing that someone with credible experience believes this to be true, should be impetus enough for anyone to get out of harms way.