The Seven Mile Bridge Run, also referred to as the 7MB Run is an annual event that has been held since 1982. Except for 2012.

On April 21, 2012 strong thunderstorms and heavy rain passed through Marathon Florida, and the rest of the Florida Keys.

Since the race is held on a raised bridge that runs miles over water, the fear of lighting strikes became a real possibility.

7MB Run entrants would be prime targets for the massive electrical storms passing through the area. Plus runners were sitting ducks on the bridge. There was no shelter to seek, and no way off the 7 mile bridge once they were on it.

Even though this was a highly anticipated Florida race, with considerable time, money and effort invested, safety was first and foremost the consideration at stake.

Florida Keys race officials were forced to make what many believed to be the unthinkable, and even for some, the unforgivable decision. The 7MB race was called off - the first time in it's history. It was however, the only decision that could have been made.

Just one of the many races in Florida held each year, this event is spectacularly unique because of it's location. Runners race across a ribbon of elevated concrete spanning water that is spectacularly multi-hued.

It's breathtakingly beautiful, and without question, is one of the most memorable parts of a road trip, or a race, through the Florida Keys.

The idea of running the official 6.79 mile length of the famous Florida Keys Seven Mile Bridge from it's starting point at Knights Key to it's end at Pigeon Key is exciting.

The fact that you're also competing with 1,500 entrants all jostling for position on this narrow ribbon of water surrounded concrete is incredibly exhilarating. 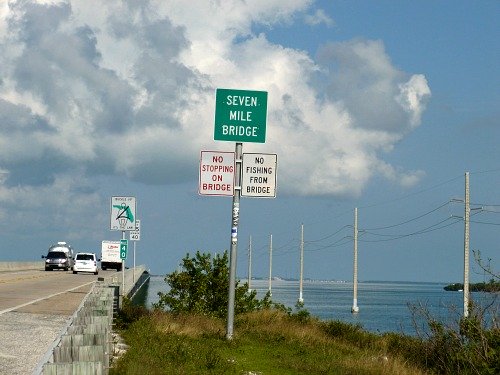 
Since this bridge is the only way for traffic to flow through the Florida Keys, entrants are given about 80 minutes to complete the Seven Mile Bridge Run. Once the 80 minutes are up, stragglers are picked up by volunteers in small yellow buses and returned to the starting point. Traffic resumes again by 9:00 a.m.

In terms of races, this is relatively short. I use the word 'short' because it doesn't take long to run if you happen to be a conditioned athlete. Some of the contestants are avid runners, and enter this popular Florida Keys race year after year.

Entrants like Paul Marmaro, who is a fitness trainer, has successfully finished first countless times. In fact, as of the morning of the ill fated 2012 race, he still held the top male runner time when he completed the race in 1998 in just 32 minutes and 59 seconds.

Also as of that morning, the record for the top female runner was held by Sonja Friend-Uhl. She successfully ran the race in 2004 in just 37 minutes and 55 seconds.

Race registration usually occurs 2 months before the Seven Mile Bridge Run. Since events can be fluid and registration details can change often, I suggest checking out the 7M Bridge Run official registration page to see what is new or modified.

There is an entrance fee and the revenue generated from this Florida Keys race was donated to schools and athletic groups throughout the Middle Keys. Since the race began in 1982, hundreds of thousands of dollars have been presented to various organizations in the Marathon Florida area.

There is also a wheelchair division with first, second and third place winners honored. The awards are presented immediately after the race, but the participants must be present to receive their prize.

The 7MB Run is held in March or April, before the humidity picks up and the heat builds. It also starts at 7:20 a.m. before the sun gets more intense. At this time of day, the gentle breeze coming off the water adds a warm, yet refreshing caress to those competing in the short event.

Efforts are made to hold the race early so it has minimal impact on traffic as well as on a runner's health. However, everyone needs to remember they are in the tropics. If they aren't used to the sultry conditions of the Florida Keys, they may feel the affects of the weather rather quickly.

Everyone needs to keep alert and pay attention to important warning signs signaling heat stroke, heat exhaustion, or muscle cramps. Symptoms include dizziness, lack of sweating, redness, nausea, cramping, goose bumps on chest or arms, and the inability to think or speak clearly.

These warning signs cannot be taken lightly. If you begin to have any of these symptoms, stop the race immediately, get out of the way of the other runners, sit down with your head between your knees, and keep an eye and ear open for emergency vehicles. ER personnel travel in the eastbound lane keeping a watch out for injured or ill runners.

Fortunately the 7MB Run is a comparatively short race, as opposed to the long brutal marathons that runners often endure.

It is a race however, and it does test your endurance. However it does so with a soft gentle kiss from a fresh ocean breeze. And even though runners fight and jostle their way to the finish line, they're treated to spectacularly sweeping vistas on their way.

Of course once this Florida Keys race is over, everyone gets to participate in the celebration event. This is a chance for runners to enjoy that special camaraderie that comes from people of like minds being together.

It's a chance to catch up with old friends and make new ones. It's also a chance to compare strategies for next year's Florida Keys event - if it doesn't get rained out like it did in 2012.