The Florida manatees are one of nature's greatest gifts to the Florida Keys.

Endearingly sweet and clumsy, the 'sea cow' is a gentle spirit that lives in the water, slowly moving around in search of food.

The ancient mariners often spoke of rapturous sightings while at sea.

Their stories laced with visions of beautiful mermaids.

However, it's widely believed that what these mariners saw, was in fact the gentle sea cow.

These occurrences were so common, that even Christopher Columbus recorded seeing three "mermaids". His observation of the sightings was that they were not "half as beautiful as they are painted." 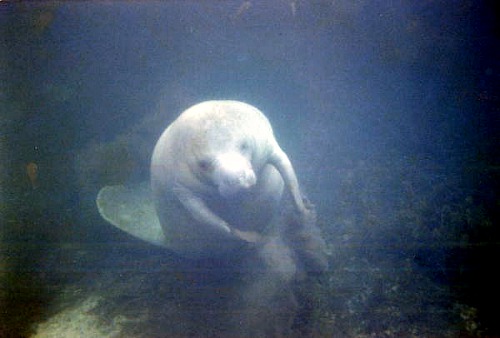 
The official marine mammal of the State of Florida, there are approximately 3,000 of this endangered species living in Florida waters.

In total, there are well under 5,000 of these gentle giants alive in the waters off the United States. To help keep the sea cows numbers from spiraling downward, they are protected by law.

Where Do Manatees Live?

During the summer months, these slow moving creatures migrate further north. They're occasionally seen as far north as Massachusetts, but they're more frequently spotted along the coastline of Georgia and North and South Carolina. 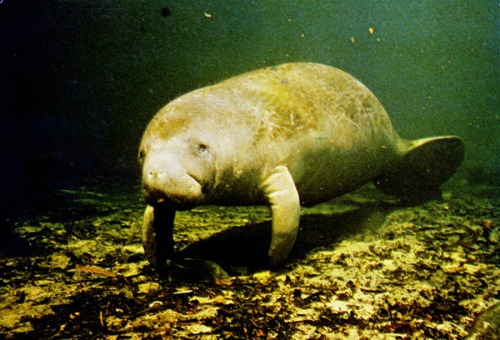 
The following books will provide you with additional facts to help you gain more insight into the behavior, habitat, and challenges facing these gentle giants.

You'll also see an assortment of intriguing jewelry with manatee themes and designs, which are great for gifts or simply fun to wear.


What Do Manatees Eat?

The slow moving bodies of water the sea cows prefer also make it easier for them to slowly meander in constant search of food.

Eating up to 150 pounds of plant material per day, they typically forage at a speed of about 2 - 5 miles per hour. However when they have to move quickly, they can reach speeds upwards of 20 mph for short bursts.

Since sea cows are found in both fresh and saltwater, it's logical that their systems are adapted to a variety of plants found in these two different water types.

They're also able to partially climb out of the water, and with their flippers and split flexible upper lip they can grab acorns and leaves from overhanging branches. They are often seen pulling and nibbling on vegetation that lines the top of channels, canals, and river banks.

Plants including algae, seagrass, hydrilla, and water lettuce are the major part of their diet. However, they will occasionally consume small fish, and other marine life such as clams.

Tearing and breaking the leaves and food into smaller pieces is done by using their lower jaw and the ridged pad found at the roof of their mouth. Their 4 rows of teeth found in the back of their mouth continually grind the food so they can digest it.

With an average of 7 hours a day spent chewing, sea cows quickly wear down their teeth. However, unlike so many other species, they easily regenerate new molars.

Even though they're seen predominantly moving slowly in search of food, you'll also spot them submerged on the bottom resting, only surfacing for air about every 20 minutes as needed.

When weather is bad, and food supplies are scarce, the fact that they have a slow metabolism enables them to survive for longer periods of time without food.

Sea cows are relatively substantial in size, averaging about 10 - 12 feet in length and weighing between 800 - 1,200 pounds.

Sea cows are also long lived, with the average life span running between 50 - 60 years in their natural environment.

One of the amazing sea cow facts is that these creatures are related to the elephant and a small gopher like mammal. Of course when you see one up close, you can somewhat see the family resemblance - to the elephant at least.

The skin is probably the closest similarity, being a dark gray brown in color, thick and wrinkled as you would see on an elephant. They also have small eyes which elephants do as well.

However, unlike the elephant, they have very small ears and they most certainly do not possess trunks. Their bodies are rounded somewhat like an elephant, but the body tapers down to form a paddle-like tail. Their front legs or forearms resemble flippers and this helps them swim or crawl through shallow water in search of food. 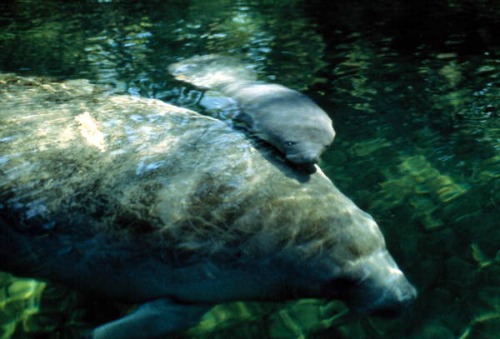 
Probably the only obvious similarity to the rodent side of their family are the whiskers on the face. Personally, I think they look somewhat like a walrus without tusks. Plus their sweet faces resemble that of a Shar Pei, complete with the rounded muzzle, wrinkles, and whiskers.

Why Are Manatees Endangered?

Unfortunately there are many reasons why the sea cow is endangered. Even though these Florida mammals are protected by law, they still fall victim to a variety of tragedies.

The most common form of injury they encounter is contact with boats and propellers. Throughout the Florida Keys, Charlie Manatee warning signs are posted, cautioning boaters to be careful as they maneuver through water where sea cows are known to live. 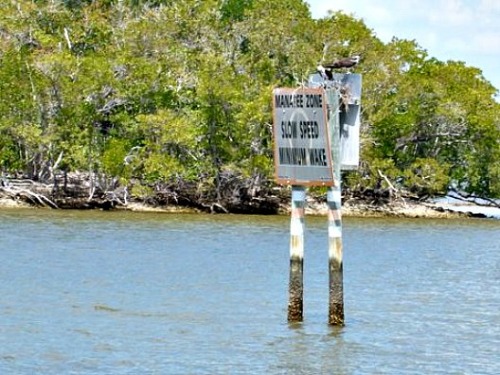 
Despite their large size, sea cows are relatively delicate and are adversely affected by a variety of other conditions which can have strong negative impact on their survival.

They're not capable of withstanding cold temperatures and the two severe cold snaps of 2001 - 2002 and 2010 were hard on them.

They can also succumb to the ravages of Florida hurricanes as they pass through the region.

Hotter water temperatures also are a problem as this causes algae to increase, forming red tide which is toxic to sea cows. 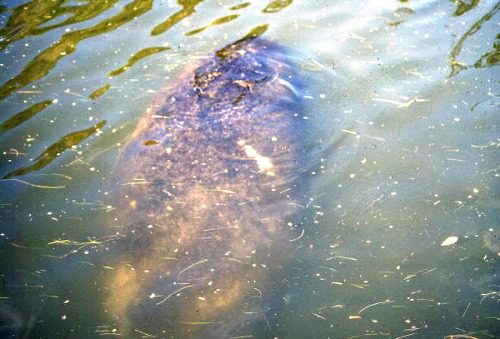 
Disease, and flood control gates which crush sea cows, are other challenges they face. Factor in a slow maturity rate of about 5 years, a long gestation period of about 1 year, the nursing and caring of a baby sea cow for approximately 2 years, and calves only being born every 2 - 5 years, and you have the recipe for a slow rebound in numbers.

Another threat to the sea cow is man's desire to swim with manatees. This is in itself isn't dangerous as long as we respect them and keep our distance. However people are often inclined to 'push the envelope'.

in 2012, a woman in the Saint Petersburg - Tampa Florida area was arrested for 'riding a sea cow'. The sea cow wasn't injured, but when you realize these are sweet, gentle mammals, it must have seemed like an assault to the sea cow. It certainly would have scared the mammal as the woman stretched herself over the length of it's back, hanging on and riding it through the water.

Florida State has a law in place making it illegal for anyone, at any time, for any reason, and by any method, to attempt to, or knowingly or negligently annoy, molest, harass, or disturb the endangered sea cow.


Catching a glimpse of these quiet, often elusive creatures, is truly a special Florida Keys event that one will always remember.

We were in the Everglades National Park at Flamingo Visitor Center the first time we saw one. I'll never forget the excitement we all felt when we heard someone loudly shout, "Manatee, there's a manatee!" Everyone in the area raced to the marina and down to the waters edge, in hopes of catching a glimpse of this endangered species.

No matter what Christopher Columbus said, the Florida manatee is more beautiful than when painted as mermaids. I hope that one day, you too will be able to recall the first time you were lucky enough to catch a glimpse of the sweet and gentle sea cow.