Toxic And Destructive, Lionfish
Are Both Beauty And Beast

Lionfish are a new addition to the vast array of Florida fish calling the Florida Keys home.

They're also one invasive alien species that is dangerous and unwelcome.

Non-native to the area, this species of fish is slowly invading the beautiful waters of the Florida Keys.

As such, it's now targeted for removal by the Florida Keys National Marine Sanctuary and the Reef Environmental Education Foundation to help protect the Florida Keys coral reefs and marine life.

To help eliminate this noxious fish from the Florida Keys, the push is on to create an interest in actively harvesting it for recreational and commercial purposes. 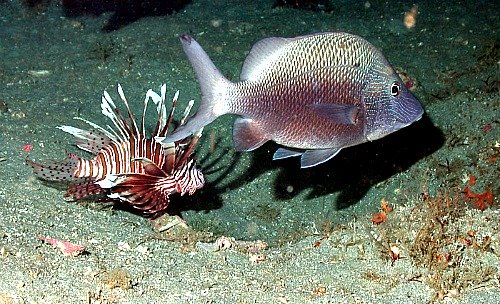 
A new mantra that everyone needs to start chanting is "Eat Lionfish". To help spread the word, recent campaigns promoting cookbooks featuring lionfish recipes have begun. The goal is to encourage families and restaurants to include this meat as part of their regular meal planning.

With white, mild tasty meat, it can be safely eaten and has been compared to hogfish in flavor. However anyone catching one of these spiny creatures, needs to know how to safely handle and clean it before serving it for dinner.

Since lionfish are targeted by spearfishing, these Florida Keys fishing guides coordinated through FishingBooker should be able to help you in your quest to eradicate this tasty, but nasty nuisance.

I'm very pleased to inform you that I am an affiliate of FishingBooker.

This company makes it ultra easy for you to figure out which fishing charter does what you want, and goes where you want to go.

Through their vast search criteria you can drill down deep to find the exact fishing charter you want to go out with on your next Florida Keys fishing vacation.

To also keep you informed, as an affiliate of FishingBooker if you click a link to a charter, book it and go on it, I stand to earn a small commission. The charter does not cost you any more booking here than if you booked some place else because this is what being an "affiliate" means.

The following link takes you to the main Florida Keys spear fishing charters page. This is because these fishing charters are also the most likely to fish for lionfish, and this link will help you explore:

Florida Keys spearfishing is a longstanding favorite sport that's also a true hunter's game. For many divers, the excitement of tracking down and singling out their prey is a major adrenalin rush.

This thrill is amplified when it comes to hunting this particular aquatic invasive species. Due to their poisonous spines, the game is substantially kicked up a notch.

Since traditional means of capture are too dangerous, spearfishing presents a relatively safe and effective alternative. You'll just need to make sure you have the necessary spearfishing gear, sharp knife and flashlight for looking in crevices where they can be hiding out.

As an Amazon Associate I earn from qualifying purchases such as the following groups of items.

Florida spearfishing is a dangerous sport that has numerous restrictions attached to it. However, it has taken on a new and vital role by helping to protect these beautiful waters. In fact, it could be said that Florida spearfishing has gone eco-friendly.

As part of a program to help eradicate this invasive species, Florida Keys spearfishing derbies are now held annually.

To further help eliminate this noxious fish, as of September, 2012, the Florida Fish and Wildlife Conservation Commission has instituted a change to lionfish restrictions.

Until at least August, 2013, there is no recreational or commercial restriction on harvesting this fish. Also, a recreational fishing license is not required if the fishermen is using a Hawaiian sling, handheld net, pole spear, or spearing device designed exclusively for lionfish.

Traditional methods of fishing do require a recreational fishing license. Also, a permit is required in the no-take zones of the Florida Keys National Marine Sanctuary.

This is one fish that has tremendous impact on the area in terms of devastating destruction and economic implications.

A voracious eater, this fish is truly beauty and the beast. It's capable of decimating large sections of the Florida fish population and can take over an entire area in just a few short years.

Part of the problem is that it likes to dine on the juveniles of many species important to the recreational and commercial fishing industry.

This species has already taken a firm, unfortunate hold in the Caribbean waters. The tremendous damage it's caused to this region has had a severe negative impact on marine life as well as on water sport, and fishing related industries. 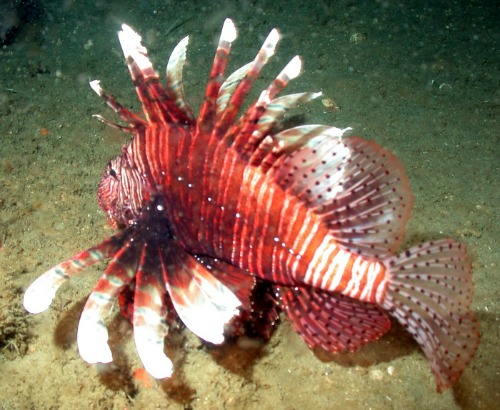 
This species presents a danger to not just to the delicate FLorida Keys ecosystem, but to divers, swimmers, snorkelers and fishermen. Contact of any kind with the its toxic spines is dangerous.

The fastest way to remove toxins from the injured body part is to submerse the afflicted area in the hottest water possible. This helps to negate and breakdown the poison in the body.

If you happen to be stung by one while at sea, use the water from the boat's engine. This should be hot enough to help breakdown the poison.

With a record of quick destruction and no known predators, this invasive alien species poses a real danger to everything in it's path, including birds and other wildlife.

Recently, a Great White Heron was rescued by several quick thinking people when they noticed the bird was in severe distress.

Using a pair of long needlenose pliers they were able to safely remove one of these toxic fish from the bird's throat. A shot of atropine helped to negate the poison, and after a few days, the bird was successfully released. Unfortunately many other birds and marine life aren't so lucky.

As an Amazon Associate I earn from qualifying purchases such as the following items.


How Did These Destructive Fish Get Here?

A real problem with this fish is that it's possesses an unusual and exotic appearance as shown by the lionfish pictures on this page. This makes it a special favorite for individuals who have aquariums in their businesses or homes.

However, this fish is equally poisonous whether at sea or in a tank. Unfortunately many individuals don't realize that this fish presents a real danger for anyone who's cleaning the aquarium or even feeding the fish.

The fact that they were people's "pets" is perhaps one of the reasons why they're now found in the waters off the Florida Keys. In an attempt to rid themselves of the fish, people emptied their aquarium tanks into the water.

Since this species has no known enemies, and is capable of fast reproduction, it is able to expand it's territory and effectively destroy everything else in it's wake. 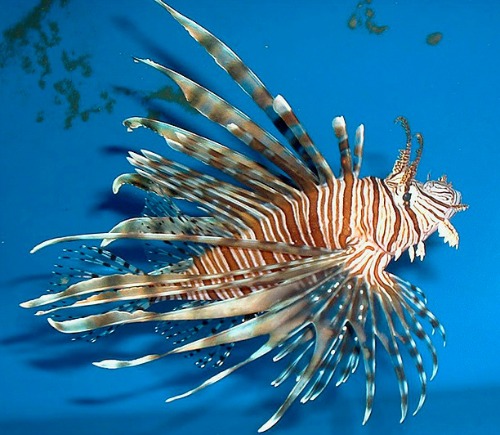 
Indigenous to the Indo-Pacific Ocean and Red Sea waters, it does not naturally occur here. Over and above the already proposed theory, there are other guesses as to how this fish got here. The problem is, there are no true answers, only endless possible how's, when's and why's.

It could be argued that ocean going vessels have emptied their bilges and caused the infestation. This is possible if the water in their bilges contained any of this species.

Is this a problem similar to dumping pythons in the Everglades? Are people really getting rid of problematic "pets" by dumping their aquariums into the water too?

The important question now is not how did they get here, but how do we get rid of them?

One interesting solution introduces us to a new and unusual ally, the shark. In Honduras, agencies are working to introduce this fish as a tasty meal alternative to this voracious predator. If they can successfully train shark to eat this invasive aquatic species, they’ll have a formidable partner capable of reducing the population and keeping it under control.

So along with the slogan "Eat Lionfish", remember to add a new one - "Go Sharks"!

You can also help eradicate the problem by participating in a Florida spearfishing derby and go lionfish spearfishing next time you're on a Florida Keys vacation. You'll be able to help save the environment, get some good 'eats', and perhaps even win a prize or two!