This is not the USS Randolph which is the name often erroneously associated with this artificial reef.

The USS Randolph was actually a large aircraft carrier, while this ship was a cable minelayer with a length of 188.2 feet and a 32 foot beam.

Built in 1942 she worked as a mine planter for the Army until she was transferred to the Navy in 1951.

She continued her work under various classifications as a mine layer, even undergoing several name changes including ACM-15, MMA-15 and the Nausett. 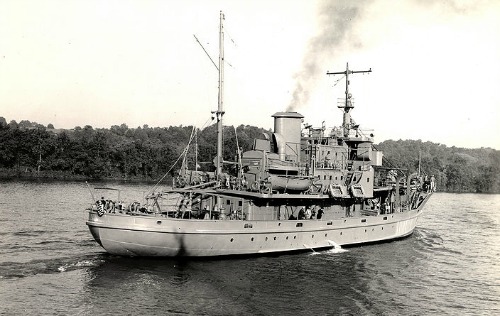 
Within a few years she was moved to the Reserve Fleet in Green Cove Springs, Florida, and on July 1, 1960 she was stricken from the register. Less than a year later she was sold to an oilfield exploration company who renamed her the Sea Searcher.

Eventually Caribbean Enterprises sold her to the Florida Power and Light Company who deployed her as part of their lightning strike research program.

Florida is one of the heaviest hit areas for lightning strikes and as part of their study, rockets with trailing conductive wires were fired into thunder heads forcing lightning strikes. The strikes were then analyzed by the equipment on board the ship.

These techniques were quite successful in generating strikes, so much so that in August, 1966, on just one day they produced 17. The strikes she took, earned her the name of Thunderbolt.

By the early 1980's she was ready to start working as an underwater surveyor vessel but while docked at Miami Harbor she sank. However, the years of lightning strikes had weakened her and taken their toll.

With no future ahead, interested parties from the Florida Keys Artificial Reef program made arrangements to have her properly prepped, and on March 6, 1986 she was scuttled off Vaca Key, 5 miles offshore of Marathon.

Today, the Thunderbolt reigns as the signature dive for divers with advanced scuba diving certification in the Marathon Key area. Resting at a depth of 120 feet on a flat sandy bottom, this nearly intact ship has become the perfect artificial reef. 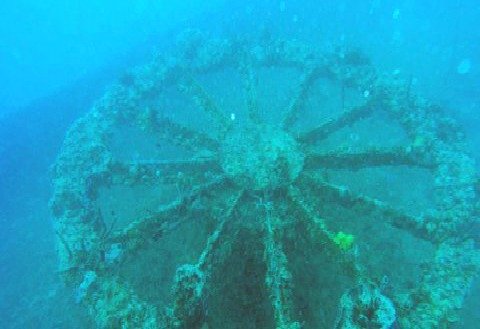 Cable Wheel on Thunderbolt is Visible from Above
Courtesy of floridakeys.noaa.gov


When scuba diving Florida Keys, if you go wreck diving on the Thunderbolt wreck, you'll find that there are 2 floats at about 25 feet below the surface. One is tied to the stern, and one to the bow.

The current can be variable ranging from mild to strong, so you'll want to use one of the cables to help with your descent. On the way down, the usually clear water will provide a good overview of the nearly intact wreck below and at about 45 feet you'll encounter the top of her superstructure.

The fine sandy silt covering the ocean floor has also spread over her lower regions. This silt can make the area slick plus you'll need to watch when finning around that you don't kick up the silt and cloud visibility.

Care was taken when prepping the ship and the first thing divers will notice is that most of her entanglements have been removed.

A dive map like this one of the Thunderbolt will be especially useful for studying the wreck diving site in advance. Plus the detailed 3-D information will help you put together an effective dive plan.

You'll also find that locating the key points on your dive be easier. Areas you won't want to miss exploring include her twin propellers, and her anchor chain which extends west off the port side toward several debris piles.

The different holds and compartments including the wheelhouse, the engine compartment, and the stairwell leading to crews quarters are easily accessible.

Plus throughout the ship there's numerous points of entry and egress making this dive spot more accessible than most.

Of course one of the most photographed and recognizable features of the Thunderbolt wreck is the large horizontal wheel located on her bow that was used for laying mines. This wheel has become heavily encrusted and large fish like to congregate in this area.

In fact, this wreck is known for it's very large game fish. Goliath grouper in the 600 - 800 pound range are routinely reported. Very large barracuda live in the area, and in the early winter months divers will encounter sailfish, while tarpon will run through in March and April, followed by permit. 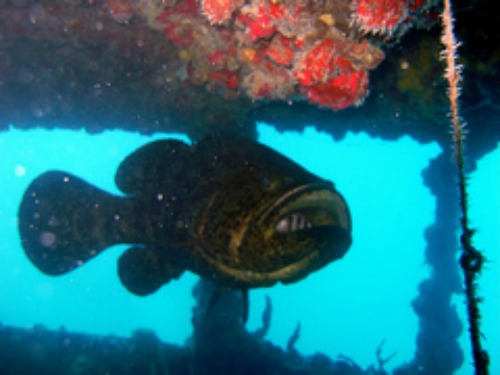 
This artifical reef has also become encrusted with a variety of coral and other marine life making this a prized dive for anyone with the necessary credentials.

Spearing is also popular in this area because of the larger game fish. Even though the water is quite clear, as a diver you'll need to watch and listen for anyone Florida spearfishing in your area.

Unfortunately in March of 2006 there was an incident at this wreck site where a spear fisherman died while free diving. The water here is quite deep, and multiple trips down and back to the surface can be very dangerous, causing blackouts, heart attacks and strokes.

Even for a scuba diver these depths and currents can be dangerous and that is why this wreck is reserved for those with advanced scuba diving certification.

Since the Thunderbolt wreck provides lots of opportunity for exploration, divers will often opt to make several return trips down. After exploring as much of the wreck as they can, they will often head over to one of the coral reefs in the Coffins Patch group to cap off the rest of their day.

Wreck Name
Thunderbolt Wreck formerly the USAMP Major General Wallace F. Randolph - 188' feet
Location
South of Coffins Patch, 1 mile SSW of Marker 20; 5 miles SE offshore of Marathon
GPS Coordinates
24 39.663N 80 57.784W
Markers
No markers. 2 mooring buoys in about 25' water at the stern and the bow. Lines run to the wreck to help with the sometimes strong current
Level
Advanced (Intermediate on good visibility days)
Depth
75' - 120'
Visibility
Usually good
Dive Site Description
Covered with coral, sponge and silt, she sits upright in 120'. At 75' you encounter an observation deck, at 85' the bow is reached where the horizontal cable reel is located. At the main deck large hatches make it possible to descend to the engine compartments down to 110' in the hull. At 120' the propellers and rudder are encountered. Currents can be very strong at this site
Marine Life
Variety of sea sponges, stony and gorgonian coral, goliath grouper, large angelfish, amberjack, black grouper, barracuda, silversides, tarpon, hogfish, mackerel, shark, pompano, permit, mutton snapper, sailfish, conch


If you have advanced scuba diving certification, no visit to the Marathon Florida area would be complete without wreck diving the Thunderbolt wreck.

Exceptionally clean, in amazing condition, with easy access, and loaded with marine life, this is of the more superlative Florida Keys dive sites.

If you do pay the Queen a visit leave a comment below. We'd love to hear about your experiences on this or any other scuba diving Florida Keys adventure you may have.