The Northern Light Wreck also referred to as the Elbow Wreck has quite an unusual, even odd history behind her.

Built in 1888, one of her first oddities is that she was one of the first steel hulled, steam freighter's to be built.

Second, her intended use was for traveling the Great Lakes, not for plying the waters of the sea.

After several ownerships, in 1917 her current owner decided to turn her into an ocean going vessel.

The oddity here is that she was too large to leave the Great Lakes system. At 300 feet in length with a 40 foot beam, she simply could not pass through the lock system.

The only way to move her, was to burn out the rivets which held her together. This caused her to split in two and she was then able to be transported through the locks. Once she cleared the system, she was reassembled and made seaworthy.

Her new home became the heavily trafficked port of Mobile, Alabama. However, when the severe economic times of the 1920's made her more costly than productive, her new owner planned an insurance scam.

On August 16, 1927, he set fire to her and several other vessels, so he could profit from the insurance money.

The scam went the way of most scams, rather unsuccessfully. The owner was charged with his crimes, and the ship, with manageable damage, was sold again. Her new owner removed the damaged portions, and cut her down to serve as a barge. 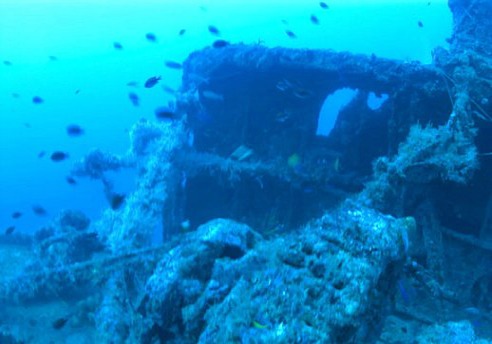 
Sinking Of The Northern Light
And Wreck Diving Conditions

On November 8, 1930, she was being towed in a very heavy storm. Unfortunately, she separated from her tow vessel, and in the process sank about 200 feet to her current position at Elbow Reef off Key Largo FL.

An interesting fact is that her final oddity was that she split in two.

Questions about this immediately come to mind. Did she split in two because of the horrendous storm and is that why she separated from her tow vessel and then sank?

Or was she intact when she separated, and only split in two after foundering on deadly Elbow Reef?

Did the insurance fire comprise a structure that was already weakened from her earlier separation and riveting?

Since she was one of the first steel hulled vessels built, was her new technology not sufficient enough to withstand sea water?

Had her hull been slowly deteriorating undetected over the years?

No matter the cause, 5 of the 7 people on board that day perished in the violent Florida storm. Out of those 7, 5 of the 6 bodies were also never recovered.

Today, the 2 portions of the Northern Light Wreck are quite interesting to explore if you're planning on taking a Key Largo diving trip.

Her bow is upright with the anchor attached to the windlass and hanging on starboard side.

You'll find that her stern is upside down and is folded atop the midships where you'll spot a toilet sitting against the bulkhead.

You'll also encounter numerous anchors left behind from Florida Keys fishing trips and wreck divers who snagged on her aft.

At about 145 from the surface, you'll come across her rudder which is turned hard to starboard surface.

Wreck Name
Northern Light Wreck or Elbow Wreck - 300' steel-hulled ship was later turned into barge
Location
Elbow Reef off Key Largo
GPS Coordinates
25 05.040N 80 21.643W
Level
Intermediate - Advanced
Depth
150' - 190'
Visibility
Exceptional - 100' - 150'
Dive Site Description
When scuba diving Florida Keys, this is a good wreck diving site for the experienced diver. Bow is upright with its anchor hanging on the starboard side, secured by its chain to the windlass. Stern is upside down on top of midship, rudder hard to starboard at about 145'. Anchors from visiting boats are attached to parts of the ship
Marine Life
Bull and nurse sharks, snapper, grouper, pompano, barracuda, rays


If you have scuba diving certification of intermediate or better, you won't want to miss wreck diving on the Northern Light Wreck. The incredible clarity of the water allows you to view the whole wreck as you're descending.

She also provides plenty of opportunity to fin around and inspect her nooks and crannies. Diving into the wreck is even possible as some of the holes are large enough to enter, and some are just large enough for a shark or barracuda to pop out and surprise you.