Cute, tiny and totally unique to the Florida Keys, the key deer are beloved, and unfortunately endangered.

To protect their dwindling numbers a Wildlife Refuge was established in 1957.

With only several handfuls of this deer species left, their future was extremely grim.

However, since they've become a protected species, they've experienced a slow regrowth in their numbers, but are still on the endangered species list.

A byproduct of their protected species status is that they've also lost their fear of humans and are extremely friendly and tame. This is a good and a bad thing. It's nice for us as humans to interact with them, but it has also taught them to come closer to us, our highways and our cars. 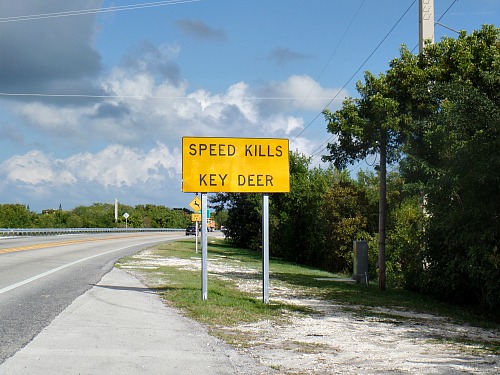 
Facts About Deer In Florida Keys

These diminutive creatures are a subspecies of the white tail deer which is found in plentiful numbers throughout the United States and elsewhere.

Except for their smaller size, their characteristics are consistent with others in their species.

They forage the same, and inhabit all regions of the area they live in. Reddish brown to gray brown in color, the larger males only average about 30 inches at the shoulder and weigh around 50 - 75 pounds. 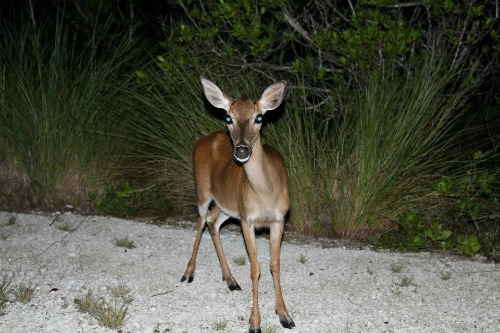 
The males loose their antlers every February through March, and then they begin to regrow again. The velvet stage is rubbed off in September, and rutting season begins.

Rutting continues heavily through October with occasional breeding occurring as late as February. Less than 7 months later, tiny spotted fawns begin to appear, weighing in at no more than 2 - 4 pounds each.

This brochure from the Department of the Interior, Fish & Wildlife Service provides a map of the refuge on Page 1. On Page 2, it provides detailed information on these tiny white tailed deer, along with important safeguards you should be aware of.

You may also find these books from Amazon interesting. They provide detailed information on this endangered species and some are available in book or kindle format.

Unfortunately, traffic accidents are one of their leading causes of death. These tiny deer are most active at night when visibility is at it's worst. To compensate, the speed limit in the Wildlife Refuge is reduced from 45 mph to 30 mph at night and is enforced from Mile Marker 33 to MM 29.

However, these tiny Florida deer are not constrained to just their wildlife sanctuary. They predominantly inhabit the Lower Keys from Big Pine Key to Sugarloaf Key. This means extreme caution should be exercised at all times when traveling this stretch of US Highway 1, especially when it's dark. 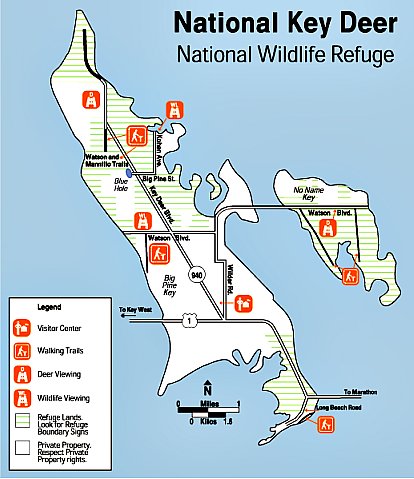 Viewing Locations At The National Refuge
Courtesy of www.fws.gov


Night time isn't the only time of day that can be a hazard to this endangered species of deer. They are also spotted during the day time, and this can cause traffic congestion along this slow moving stretch of highway.

To avoid traffic jams and accidents, instead of stopping and obstructing traffic, drivers should continue on. The best places for viewing these animals at leisure is to continue north to the end of Key Deer Blvd, or drive to the end of Watson Avenue on No Name Key.

Since most people feed and pet them when they stop, these tiny animals are continually drawn to the roadways to feed. By choosing appropriate viewing areas and not stopping along the highway, not only do you avoid creating congestion, you help break their dangerous pattern of roadside feeding. 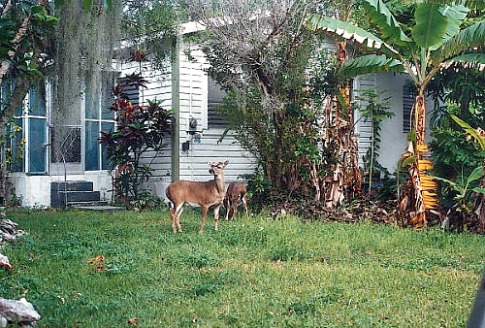 
This will help keep them further from the road and reduce the number of accidents which result in unnecessary deer deaths each year.

As the deer population has grown, the tiny islands they inhabit have become strained. Competing with human activity for space, and with only a limited amount of natural vegetation available, their environment is being stretched to capacity.

Biologists are now working to relocate some of the animals to other island locations throughout the Florida Keys. These relocation efforts help to repopulate other islands, reduces the stress on vegetation, and ensures food is more abundant for everyone. 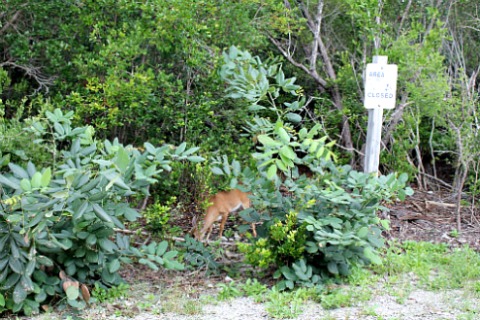 The National Key Deer Refuge is where the majority of these tiny creatures are found. With wildlife conservation efforts, hopefully one day the incredibly tiny deer will once again inhabit most of the Florida Keys. 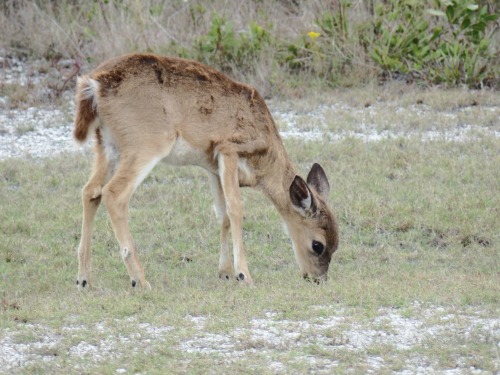 
With that possibility comes renewed responsibilities on our part. Herd health must be maintained, and we'll need to live and interact with them on a larger, more responsible, and mutually compatible scale.